As Diversity Programs and Outreach Director, Winston is responsible for developing engagement pathways for community partners and managing relationships with different stakeholders. He handles all digital and external communications, liaises with Press Team; in addition to serving on different hiring and diversity committees, and assisting the Chief Diversity Officer with various tasks, including drafting letters and documents, telecommunications, and information analysis.

Winston is also responsible for coordinating a quarterly itinerating Neighborhood Career Fair Series, including recruiting employers, conducting constituent outreach, compiling data and producing reports to help to shape the City workforce diversity policy. Previously, Winston served as the Constituent Engagement and Outreach Specialist for the Mayor’s Commission for Persons with Disabilities, where he led the strategic outreach for the City’s Accessibility Priority Survey to complement the Imagine Boston 2030 plan.

Additionally, Winston spearheads the City of Boston Toastmasters Employee Resource Group and has made Boston the first municipal government in the Commonwealth of Massachusetts with a Toastmasters chapter.  The club provides a welcoming, educational, and supportive space that empowers every participant to discover their leadership style and master the art of public speaking.

Winston sits on several advisory boards, including the Commonwealth Seminar, the Empowering People for Inclusive Communities. He also co-chairs the Massachusetts Department of Public Health — Health and Disability Partnership. He is currently competing at the IXL Center Innovation Olympics, representing Boston University’s team, where he is addressing the challenges facing minority-owned businesses in Boston and improving the diversity of the region.

He is currently pursuing a master's in City Planning with a focus on economic development and sustainable cities at Boston University. He has recently completed the Partnership Inc. associate program, a year-long leadership development forum taught by some of the leading experts in the field of diversity and social-emotional intelligence. He graduated from the University of Massachusetts Boston with a B.A. in Political Science and a minor in Psychology. He also attended the Institute on Political Journalism and the Institute on Comparative Political and Economic Systems, respectively, in summers of 2014 and 2015, at George Mason University in Fairfax, Virginia. Winston is fluent in both Haitian Creole and French. 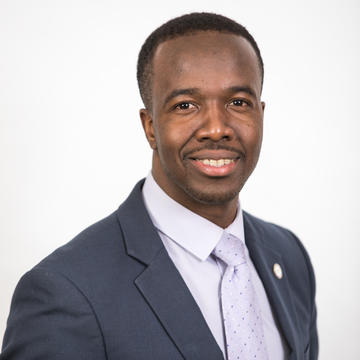