Ahead of the September 1 State Primary, the City of Boston Election Department is reminding registered voters that a week of early voting begins today in Boston at locations around the City. The election includes the following races: Senator in Congress, Representative in Congress, Governor's Councillors, Senator in General Court, Representative in General Court, and Register of Probate. 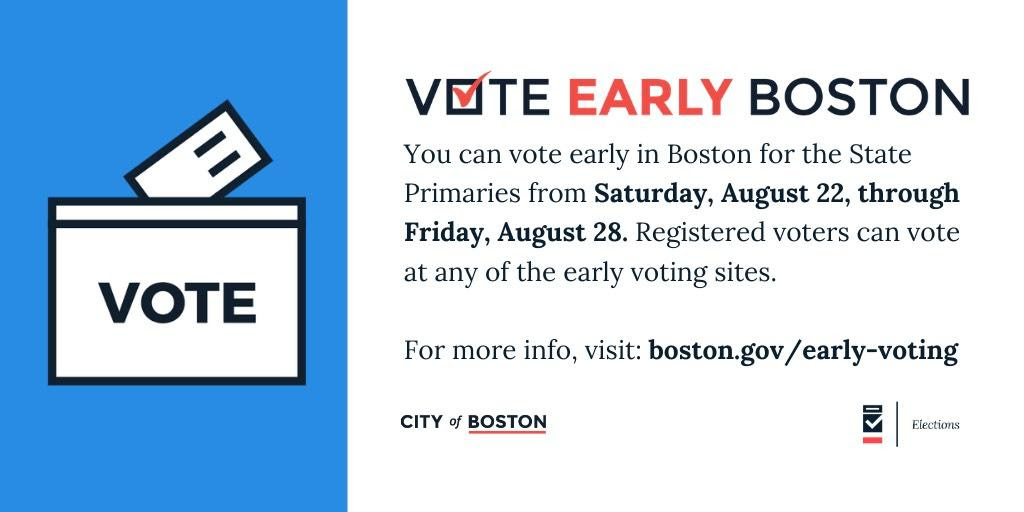 All early voting sites are equipped with electronic poll books for voter check in. Early voting locations are well staffed with poll workers and interpreters, and fully accessible to voters with disabilities.

At the end of each day, all voted ballots will be secured and then delivered on Election Day to each voter's precinct to be officially counted with all other ballots.

Early voting was made possible by the Acts of 2014. During the 2016 inaugural early voting period, over 47,000 voters, representing over 17 percent of the total ballots cast, participated in early voting.

All registered voters have received a vote-by-mail application in their mail boxes during the week of July 20, 2020. The application is in a postcard format. To receive a ballot, voters must first complete, sign and return the prepaid postcard application to the Election Department by August 26, 2020 for the State Primary. Voters may request a ballot using the vote-by-mail application for the September 1, 2020 State Primary, November 3, 2020 State Election or all 2020 elections. Voters may also request ballots in Spanish, Chinese and Vietnamese. Residents who have requested to vote by mail can track their ballots online.

If residents never received or lost this application, they can request a new ballot application by completing this form and sending it to the City of Boston's Election Department, via mail, email, fax, physically, or dropping it off at the dropbox located in City Hall or at early voting locations during the early voting period.

Absentee voting in person is available until August 31, 2020 at 12:00 p.m. at the Elections Department in City Hall. To qualify to vote absentee, registered voters must be absent from the City on Election Day, must have a religious belief which prevents them from going inside of a polling location, or have a physical disability which prevents them from going to a polling location. The application to request an absentee ballot can be completed by mail or in person at the Election Department in City Hall. Learn more about applying here.

Members of the media are reminded that certain rules must be followed in order to ensure a smooth voting process for voters.