Comprised of a 50-foot rock cliff, Warren Gardens Urban Wild is bordered by Warren Street, Richard Street, and Circuit Street. Perhaps the most important aspect of this urban wild is its historical significance as one of the last remaining markers of Old Roxbury. This area was once part of teacher John Eliot's 17th century pasture, which covered thirty acres between the ancient way of Walnut Avenue and the present-day Lewis School. In 1876, merchant Isaac Fenno built a large mansion, called Buena Vista, on the highest ridge; the remains of the foundation can still be found on the site. In 1955, Almira T.B. Fenno-Gendrot willed the parcel to the city, explicitly stating that "the unique and elevated location shall be forever kept open, an object of beauty with its rocks and trees." Nine years later, the BPDA redeveloped a portion of the site as housing, named Warren Gardens, for their urban renewal scheme while the remainder was left as open space. Today, the area still provides a quiet natural respite within the dense urban setting. The majority of the outcrop is vegetated by a mixed deciduous forest of oaks, red maples, and black cherry. However, near the summit, a small section opens up into a cool, grassy field. Norway maple, European buckthorn, and multiflora rose have significantly invaded portions of the site. Earthworks has performed some removal of invasive species and replanting with native species. New plantings include sugar maple, juneberry, black and red chokecherry, white birch, gray dogwood, green and white ash, red oak, nannyberry, and white pine. 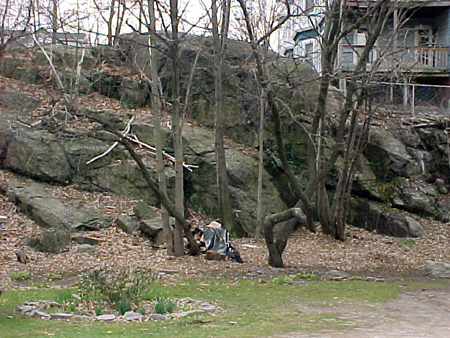 Taken by the city through tax foreclosure in 1962, Rockledge Urban Wild has served as a peaceful encove in densely settled Roxbury for decades. The site is characterized by a wooded puddingstone outcrop that connects a lower and upper clearing. The upper clearing, bordering Logan Street, offers excellent views of downtown Boston. Neighbors have groomed and planted the lower clearing that borders Rockledge Street. While the lower section is largely comprised of mown grasses and planted flower beds, the puddingstone outcrop supports a wide array of plant life including gray birch, beech, oaks, red maples, and ferns.