BOSTON - Thursday, December 19, 2019 - Mayor Martin J. Walsh today signed an updated version of the Boston Trust Act, an ordinance approved unanimously by the Boston City Council last week with the goal of ensuring a safe and welcoming City for all. The Boston Trust Act promotes trust in local law enforcement officials and City government, defining the distinct roles and responsibilities of the Boston Police Department (BPD) from those of U.S. Immigration and Customs Enforcement (ICE).

"Updating the Trust Act is a step we take proudly as a city that allows us to continue leading with our values," said Mayor Walsh. "Over the past few years, we've seen national rhetoric on immigration take an ugly and dangerous turn, even in an immigrant-friendly city like Boston. We need to take a stand, and this updated version will bolster trust in our communities and protect public safety. I want to thank everyone, especially the staff and advocates, who worked on this ordinance that will make our whole city stronger." 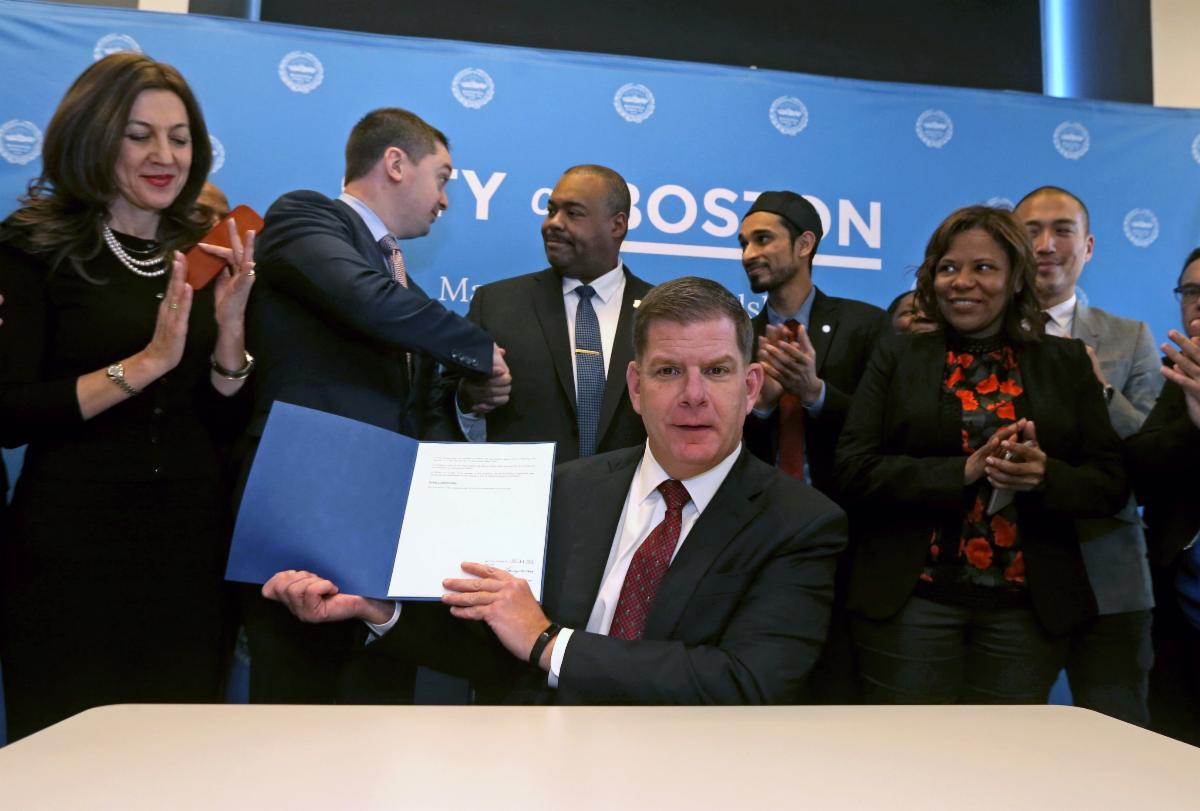 The Boston Trust Act was originally signed into law by Mayor Walsh in 2014. The amendments build on the original ordinance, making clear the role of Boston Police officers, outlining how they will not: ask individuals about their immigration status, share information with ICE, make arrests based solely on ICE administrative warrants, perform the functions of federal immigration officers, and transfer an individual to ICE custody. The revisions maintain an annual reporting requirement to the City Clerk and adds a requirement for the Boston Police Department to train all officers on these amendments.

"Passing the Trust Act in 2014 was a proud moment for the City of Boston," said City Councilor Josh Zakim. "In the 5 years since, immigrants have been scapegoated and attacked by so-called leaders in this country. These updates to the Trust Act that are being enacted today, are an example of how Boston continues to stand up for our values, to protect all of our residents. I thank Mayor Walsh, the Boston Police Department, my colleagues on the Council, and the countless community activists who contributed to updating the Trust Act. Together we are making sure that our city's law enforcement personnel and resources are able to focus on public safety, not enforcing failed federal immigration policy."

The amendments also distinguish between ICE's two main divisions: the Enforcement and Removal Operations division (ICE-ERO) and the Homeland Security Investigations division (ICE-HSI). The Boston Police Department will not work with either division solely for civil immigration enforcement purposes, while continuing to work with the ICE-HSI division on matters of significant public safety importance, such as human trafficking, child exploitation, drug and weapons trafficking, and cybercrimes.

"It's the duty of the Boston Police Department to protect everyone in the City of Boston, regardless of who they are or what their immigration status might be," said Boston Police Commissioner William Gross. "Our police officers do their level best to do their jobs correctly, professionally and with compassion. Everyone should have faith and confidence that Boston Police are here to serve and keep every person who lives, works and visits Boston safe."

The updated ordinance furthers its original intent of ensuring that immigrants who live and work in Boston can trust the Boston Police Department, while preserving their ability and responsibility to serve and protect victims, hold criminal offenders accountable, and ensure public safety for all, including native and immigrant residents alike.

"This is a big victory for Boston's immigrant communities," said Eva Millona, Executive Director of the Massachusetts Immigrant and Refugee Advocacy Coalition (MIRA). "We're very grateful to the Mayor and the City Council, and to our fellow advocates, for putting an end to local involvement in civil deportations and restoring community confidence in police. Congratulations to all the stakeholders who worked so hard to achieve this highly significant advance. You have sent a powerful message that this city values and protects all Bostonians, no matter who they are or where they come from."

Since the signing of the Boston Trust Act in 2014, the Boston Police Department has submitted a report to the City Clerk annually with the number of civil immigration detainer requests received; the number of individuals that City law enforcement officials detained; the number of individuals transferred to ICE custody; and the total cost reimbursements received from the federal government. With the updated version, any arrests made related to criminal re-entry, detected during an unrelated Boston Police activity, will be included in the report as well.

Reports from the Boston Police Department show that in 2017 and 2018, ICE lodged 68 and 107 civil immigration detainer requests respectively, which all were given access to bail by BPD and were not transferred to ICE custody. Those that did not post bail were transported to the court for arraignment, moving out of BPD's authority. The updated ordinance keeps requiring the department to report this information, including the reasons for civil immigration detainer requests.

The Boston Trust Act preceded the Lunn v. Commonwealth case where the Supreme Judicial Court ruled that Massachusetts and its municipalities do not have the authority under state law to honor civil immigration detainer requests.

The updated ordinance builds on Boston's immigrant advancement work and its efforts to mitigate the impact of federal immigration restrictions on the City's immigrants. Since the start of the Trump Administration's implementation of an immigration restrictionist agenda, Mayor Walsh has been opposed to proposed changes to the Deferred Action for Childhood Arrivals (DACA) program, the termination of Temporary Protected Status (TPS) for individuals from multiple countries, the proposed redefinition of "public charge," and HUD's proposed rule to expel from public housing mixed-status families paying prorated rent.

Launched in 2017, the City partnered with private donors and philanthropic foundations to form the Greater Boston Immigrant Defense Fund, which strives to increase education and access to legal services to defend its many immigrant communities, refugees, and temporary status holders. Over the past two years, the Fund has raised over $1.11 million, which has allowed nonprofits to create new positions for six immigration attorneys and eight community advocates. The fund has increased the region's capacity to serve immigrants, and as a result, 363 legal cases have been opened and nearly 54,000 people have attended 796 community education events. In its third year, the fund has raised $700,000, including City funds. Boston is the first New England city to contribute to such a fund.