Skip to Main Content
Bitter Cold in the Forecast
/
Mayor Wu declared a cold emergency in Boston from Friday, February 3, through Sunday, February 5, due to the extreme cold weather in the forecast. BCYF locations will be activated as warming centers on Friday and Saturday during their normal hours.
Learn more about the forecast
Last updated: 5/9/17

The remains of a 19th-century lime schooner were discovered during construction at 121 Seaport Boulevard in May 2016.

In May 2016, construction crews excavating the foundations at the building site of 121 Seaport Boulevard discovered the hull of a large ship preserved in the clay of the former South Boston Flats.  The developer, Skanska, chose to temporarily stop work in the area of the ship to allow for archaeological documentation before continuing work.

Unless otherwise noted, these results and images are from the 2016 archaeological report by PAL on file at the Massachusetts Historical Commission. 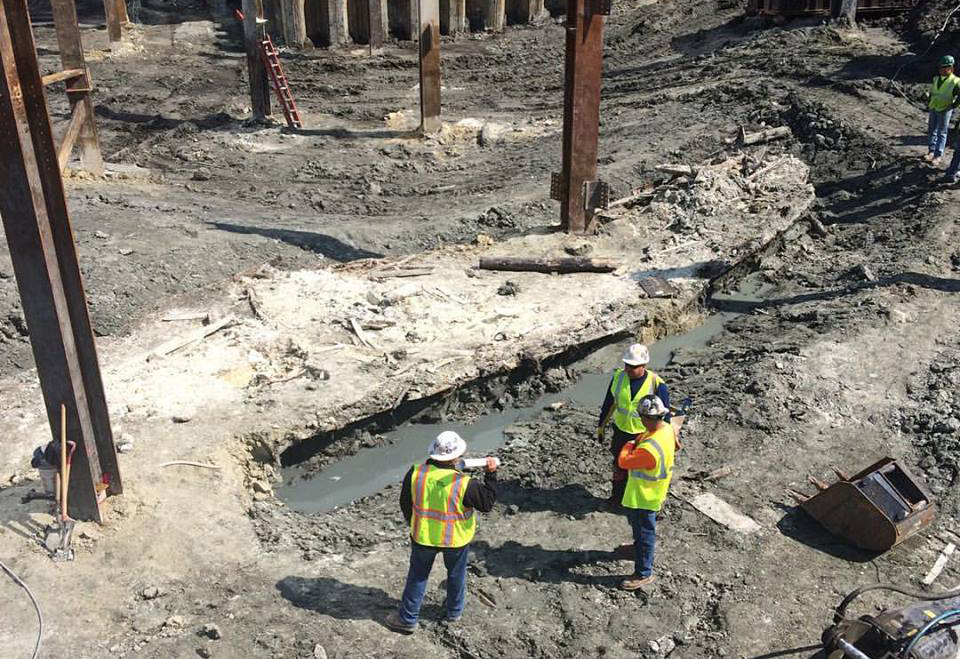 Until it was filled beginning in 1885, the site of the Seaport Shipwreck was part of the expansive South Boston Flats, a tidal mudflat that would have been dry at low tide and submerged at high tide.  Much of the land that today makes up the Seaport district of South Boston was filled in the 19th century.  The Seaport Shipwreck was found under 20 feet of fill resting directly on clay in what used to be the harbor's seabed.

During initial construction work at the site, dozens of massive H-piles (steel beams) were driven into the fill prior to it being excavated. This resulted in two piles unknowingly impacting the shipwreck well before excavations reached it.  Excavation crews removing the fill with heavy machinery found the wooden hull of the ship and stopped excavations.

Once enough fill had been removed that the hull was fully exposed, it was clear that an important archeological discovery had been made. The developer, Skanska, willingly stopped work in the area and called in professional archeologists to document the site. 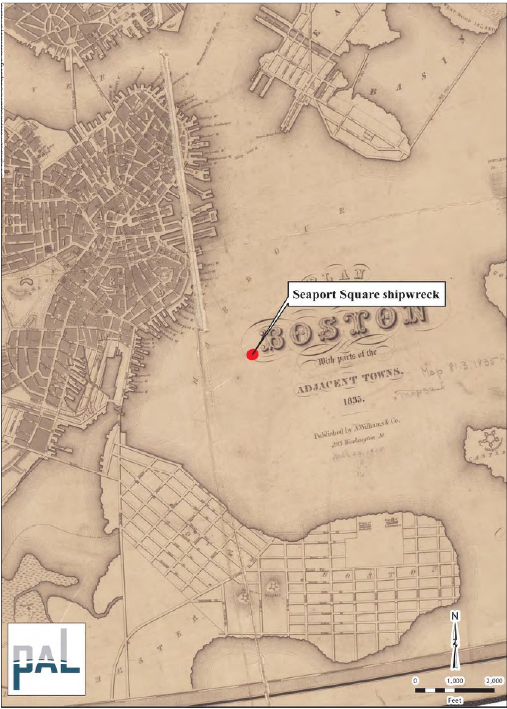 The remains of the Seaport Shipwreck included a significant portion of the lowest part of the ship's hull, measuring 47 feet long by 15 feet wide.  The stern or rear of the ship was missing, but it is likely that the ship was between 60 and 80 feet long when built.

The archaeological team documented several hull components including a keel, keelson (a timber beam that runs along the interior center of the hull), three plank types (floor, ceiling, and hull), one knee timber (interior brace), two mast steps (hole in the keel and planks for the mast), and numerous futtocks (ribs).

The two mast steps indicate the ship was a two-masted schooner.  The fore mast, the mast closest to the bow, was located very close to the keel.  Based on the size and positions of the masts, the ship was likely a schooner type known as a "pinky."

The Seaport Shipwreck was not a young ship when it sunk.  Many of the futtock timbers used in the ship's construction are compass timbers, which are curved tree branches selected for their naturally-formed shape.  By the mid-19th century, many of these trees were already consumed, indicating that the Seaport Shipwreck was built in the early 19th century and likely had an earlier purpose before becoming a shipping schooner. 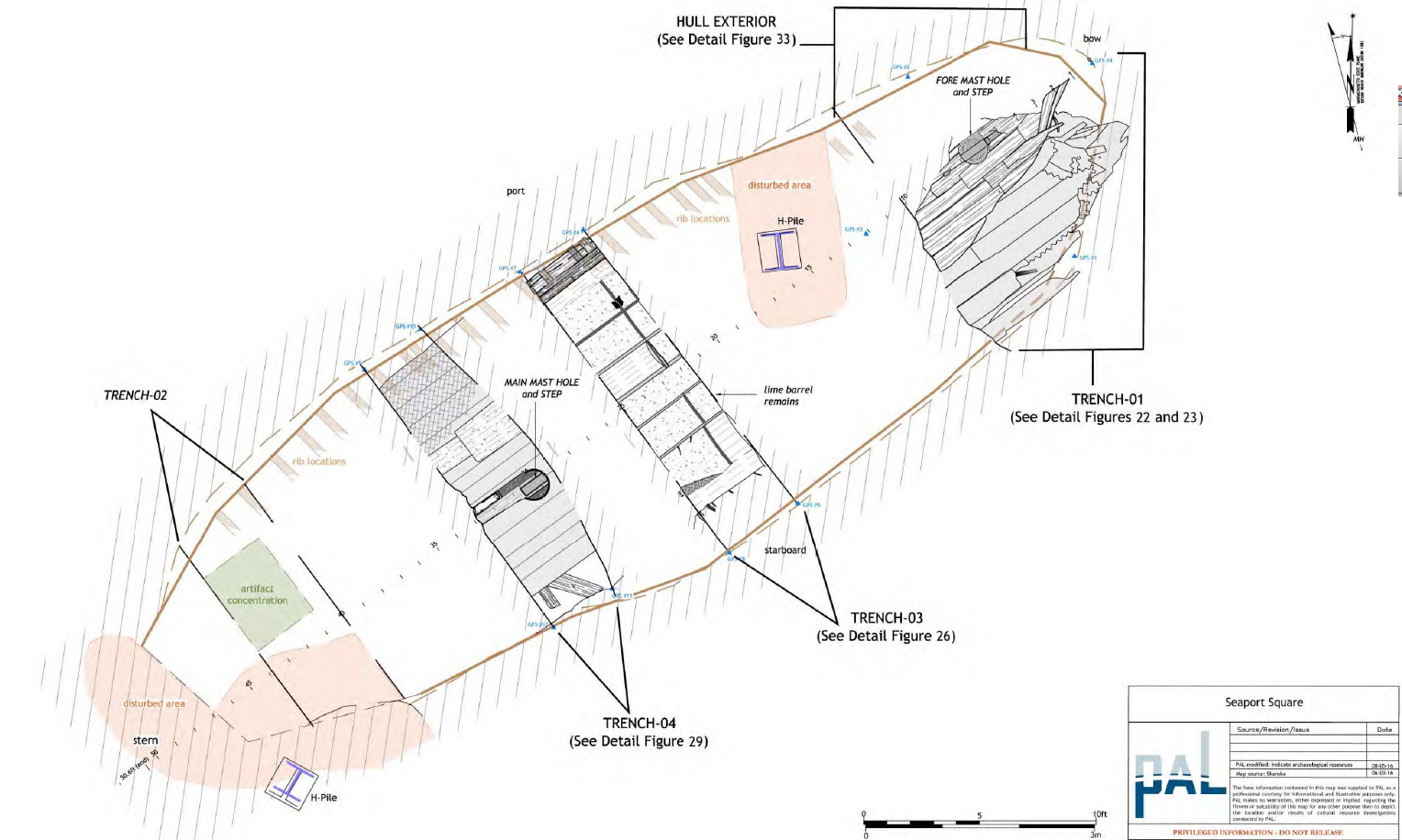 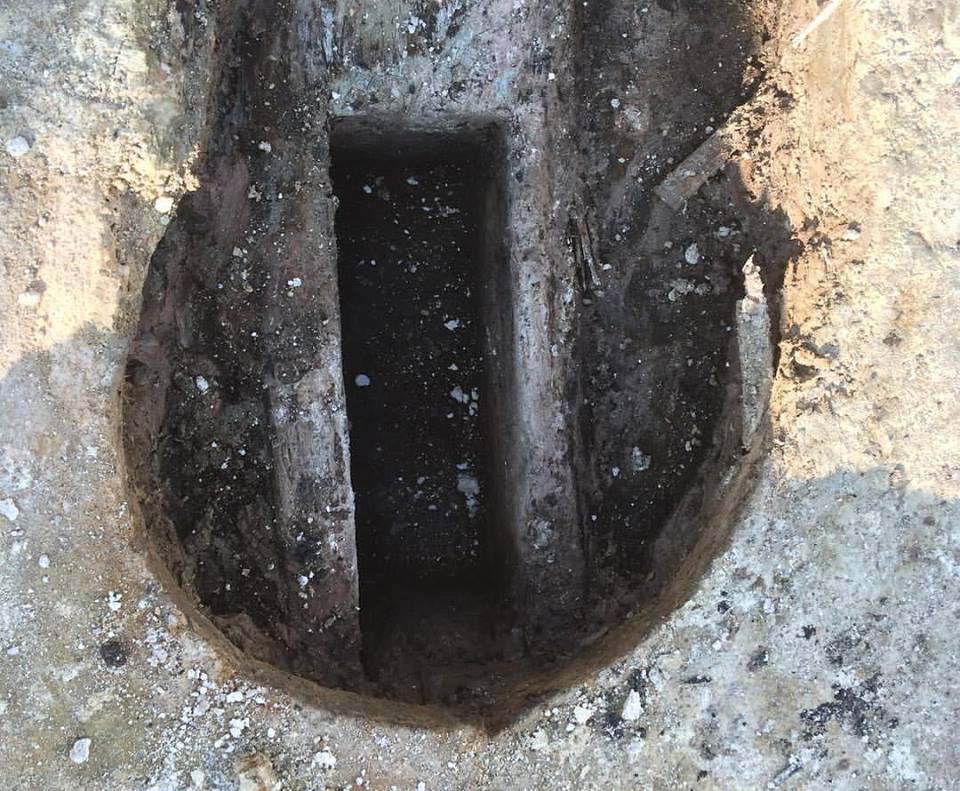 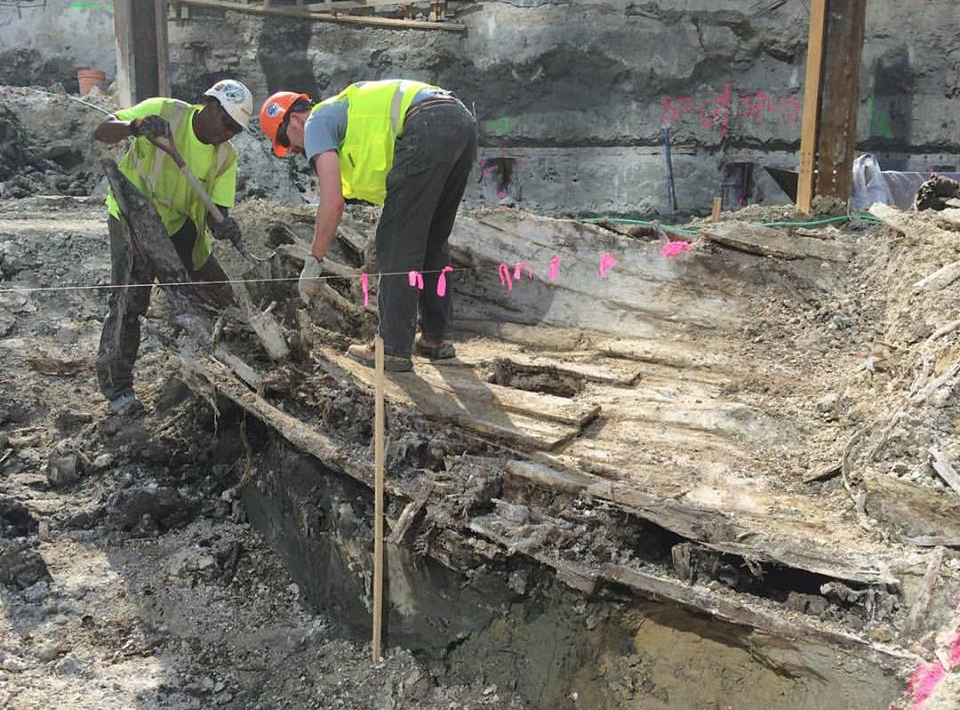 Archaeologists documenting the site found dozens of partially burned wooden casks or barrels filled with lime.  These barrels were placed on their side parallel to the keel and stacked so tightly that there were almost no spaces between each barrel.  Historic records of a similar-sized lime schooner was documented to contain over 1,200 lime barrels, and it is likely that the Seaport Shipwreck also contained a similar cargo.

Each wooden barrel measured 1.5 x 2.5 feet in size. They were made from several staves and held together by natural birch hoops.  They were remarkably well preserved in the wet conditions, with the exception of their burned portions, which had been lost while the ship was still underwater.  A barrel lid was found in the hull with a partial stenciled label "ROCKLA" indicating that the ship and its cargo originated from Rockland, Maine, the leading lime producer in America during the mid- to late-19th century.

Lime would have been an important component in mortar, which was in high demand in Boston for the booming Financial District, Back Bay, Beacon Hill, and South End neighborhoods. 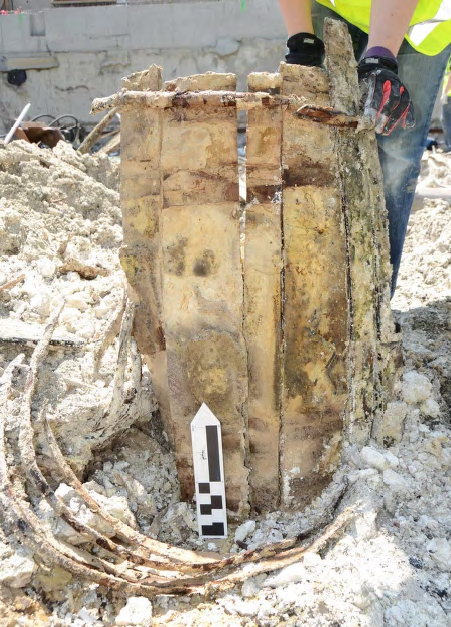 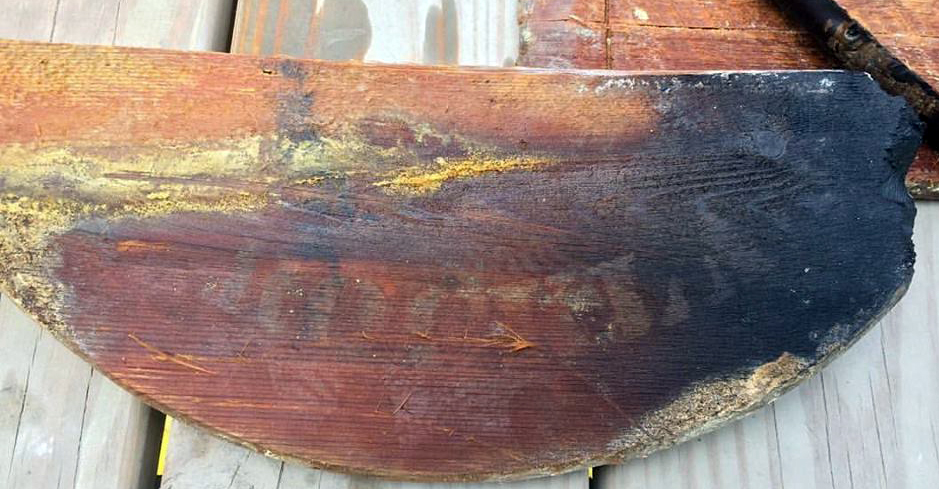 It is likely that the lime cargo was the source of both the fire and the reason why the boat sank. When lime gets wet, it heats up in an exothermic reaction.  In spite of it being dangerous, shipping lime via boat was still the most cost effective method.

If water managed to leak into the hull, the casks of lime would expand and heat up eventually catching fire, and burning lime schooners were frequently noted in local Boston papers in the 19th century.  It is highly likely that the cargo of the Seaport Shipwreck got wet, caught fire, and led to the burning and sinking of the ship.  The stern (rear) of the ship had burned completely and the barrels of lime were all partially burned.

The position of the ship found with the bow pointing northeast indicates that the ship was towed to the South Boston flats and deliberately left there, likely as the ship was on fire. It was the safest place for the uncontrollable fire to burn out without catching other ships, wharves, or buildings on fire.

Archaeologists working in the rear of the ship found a concentration of household items that were likely originally in the ship's cabin, including a stack of ironstone plates, two three-tined forks, a knife, a clay tobacco pipe marked "McDougall," a whetstone, a can of nails, and small hinges possibly from a box.  All of these items were heavily burned, likely due to the lime fire.  Fortunately, these artifacts helped greatly in the overall timeline of the ships history and its sinking.  The three-tined fork with its iron handle, central "well" and overall form was a style created first in 1869 and popular after the Civil War. 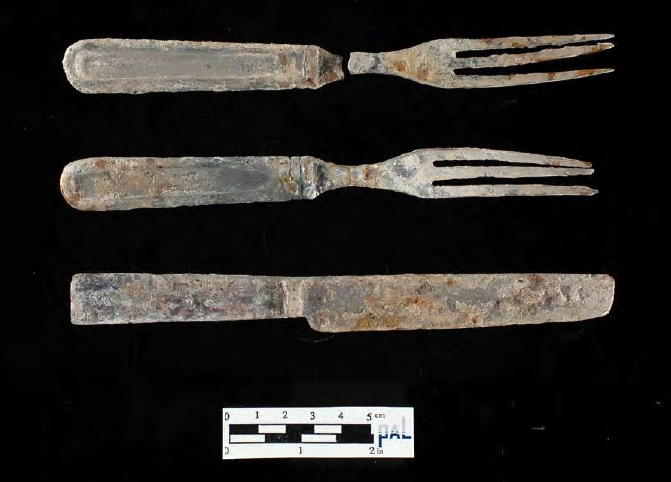 Two forks from after 1869 and a knife recovered from hull of the Seaport Shipwreck. (Image credit: Public Archaeology Laboratory, Inc.)

With the fork not being invented until 1869 and the filling of the land in 1885, we can confidently date the sinking of the Seaport Shipwreck to sometime between 1869 and 1885.  The name of the ship is still unknown and archaeologists are actively pursuing several research leads into the various lime ships from Rockland that meet the description of the Seaport Shipwreck that are documented in historic sources as having sunk in Boston Harbor between 1869 and 1885.

As for the original construction date of the ship, several wood samples of the ships hull planks and futtocks containing bark and outer tree rings have been collected and await future dendrochronological tree ring dating analysis.  Dating analysis costs approximately $2,000.  If you have any possible research leads or documentation, or would like to make a donation towards dendrochronology dating of the Seaport Shipwreck timbers, please email archaeology@boston.gov.

The shipwreck was removed by Skanska in several large fragments after thorough archaeological documentation in order to continue work on the 121 Seaport Blvd. building.  It was stored on flatbed trucks for several months during which archaeologists had the opportunity to continue documentation of the ship's hull and construction.  The shipwreck was part of the privately-owned property of Skanska. As the timbers and overall boat were in a fragmentary state, and as complete conservation and restoration were not feasible (only the lowest portion of a very large ship hull was found intact), creative alternative uses of the ship's timber were sought.

The artifacts found within the ship are currently held by professional archaeologists while it is being determined if they will be put on display in the completed building. If they are not, the artifacts will be transferred to the City of Boston Archaeology Lab and be made accessible to the public and researchers. Thirteen large archival sample fragments of the ship, including pieces of keel, futtock, and planking as well as samples of barrel, barrel hoop, oakum (fiber used in hull caulking), ballast stones, and trunnels (wooden nails) are currently held in the City Archaeology Lab. These are accessible to researchers and the public by appointment (email archaeology@boston.gov to make an appointment).