Skip to Main Content
City department hours
/
City Hall is only open to the public on Tuesdays and Fridays, from 9 a.m. - 5 p.m. If you need to visit a department at City Hall, you must make an appointment.
Department information
COVID-19 information
/
For the latest updates, please visit our coronavirus (COVID-19) website:
Coronavirus updates
Back to top
Last updated: 1/7/20

You can learn about the different bike lane design elements in the City of Boston below. For more information on our bike lane efforts, please visit our Better Bike Lanes website.

Buffers increase space between people biking and people driving. They help prevent unintentional collisions that could cause serious harm.

Buffers may be located on either side of the parking lane. Buffers offer more space for people to open their car doors without unexpectedly hitting a person biking, which is also called “dooring”. "Dooring" is one of the most common types of crashes involving people biking.

When the buffer is on the passenger side of the vehicle, it is always at least three-feet wide. The buffer may be wider near accessible parking spaces, and when behind bus stops. These buffers may be painted on the street, or may be constructed islands.

When the buffer is next to the driver side of the vehicle, it will be painted. 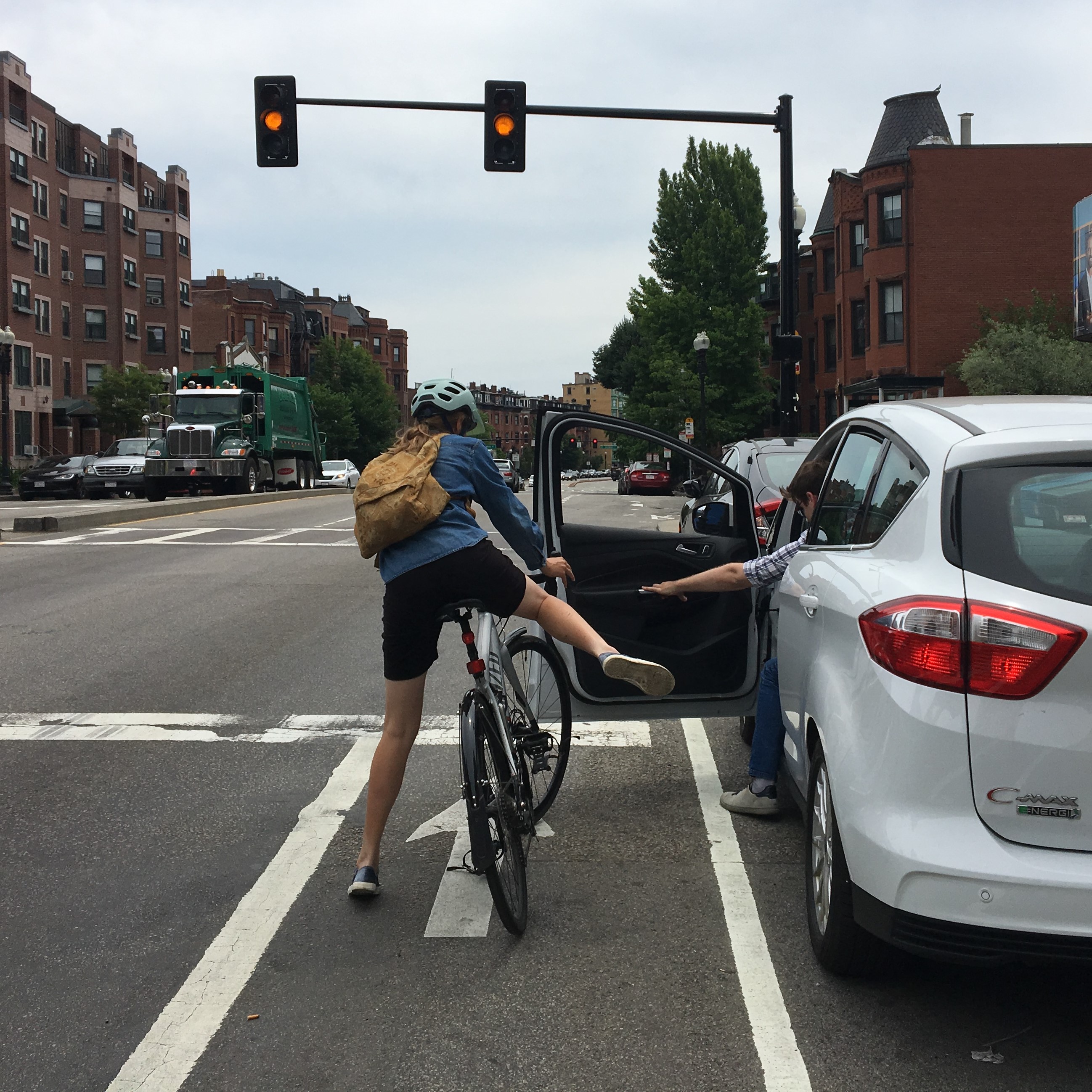 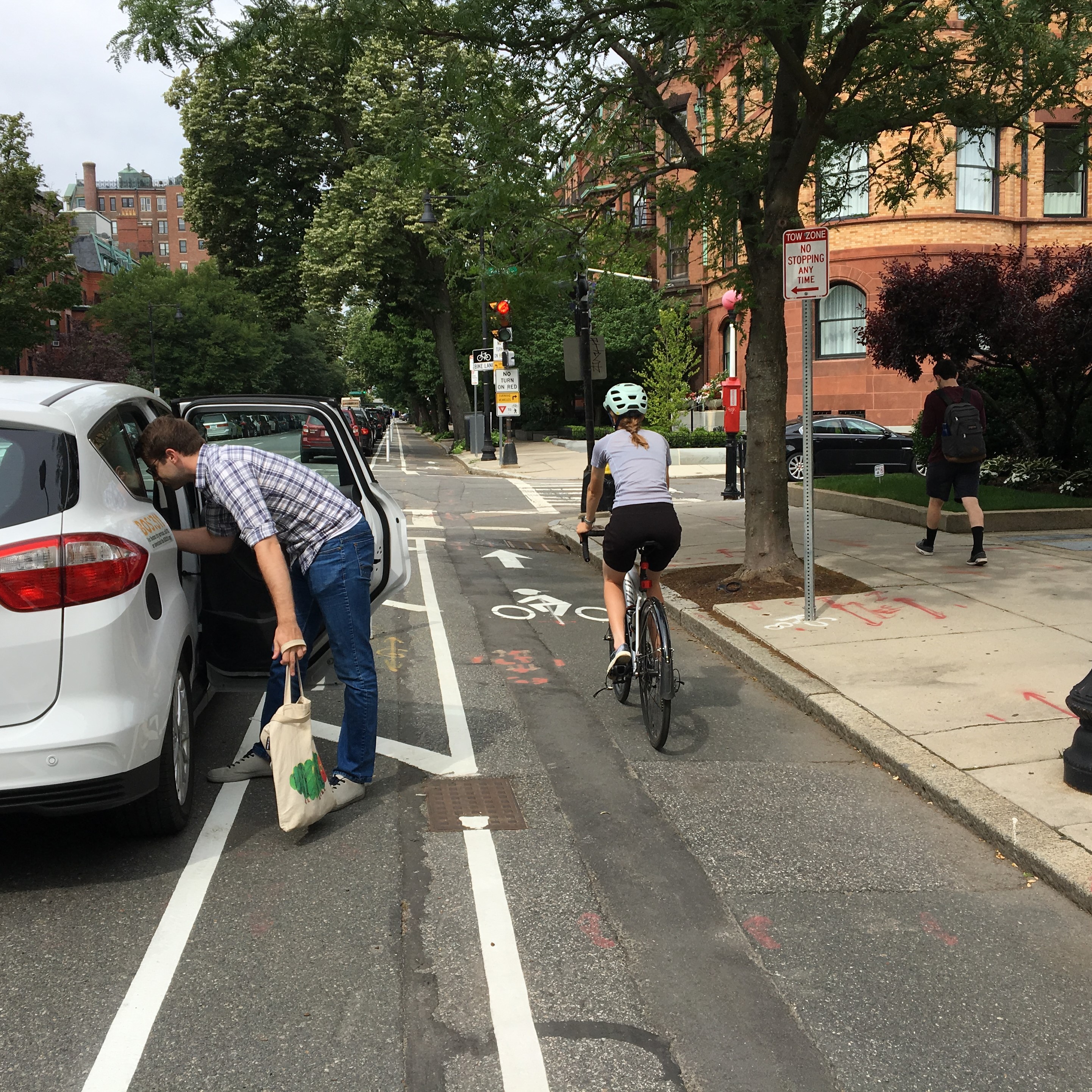 With standard bike lanes, it can be hard to see a person biking who is waiting on the right side of your car at an intersection. Offset intersections create more space between car travel lanes and the curb.

This extra space encourages people to turn at slower speeds. This gives drivers the chance to see people biking before completing a turn.

With offset intersections, people driving don’t need to fully turn their head or rely on mirrors to see people bicycling. or walking. Drivers can:

This design also reduces the potential of collisions to a single location, where turning traffic crosses the bike lane. 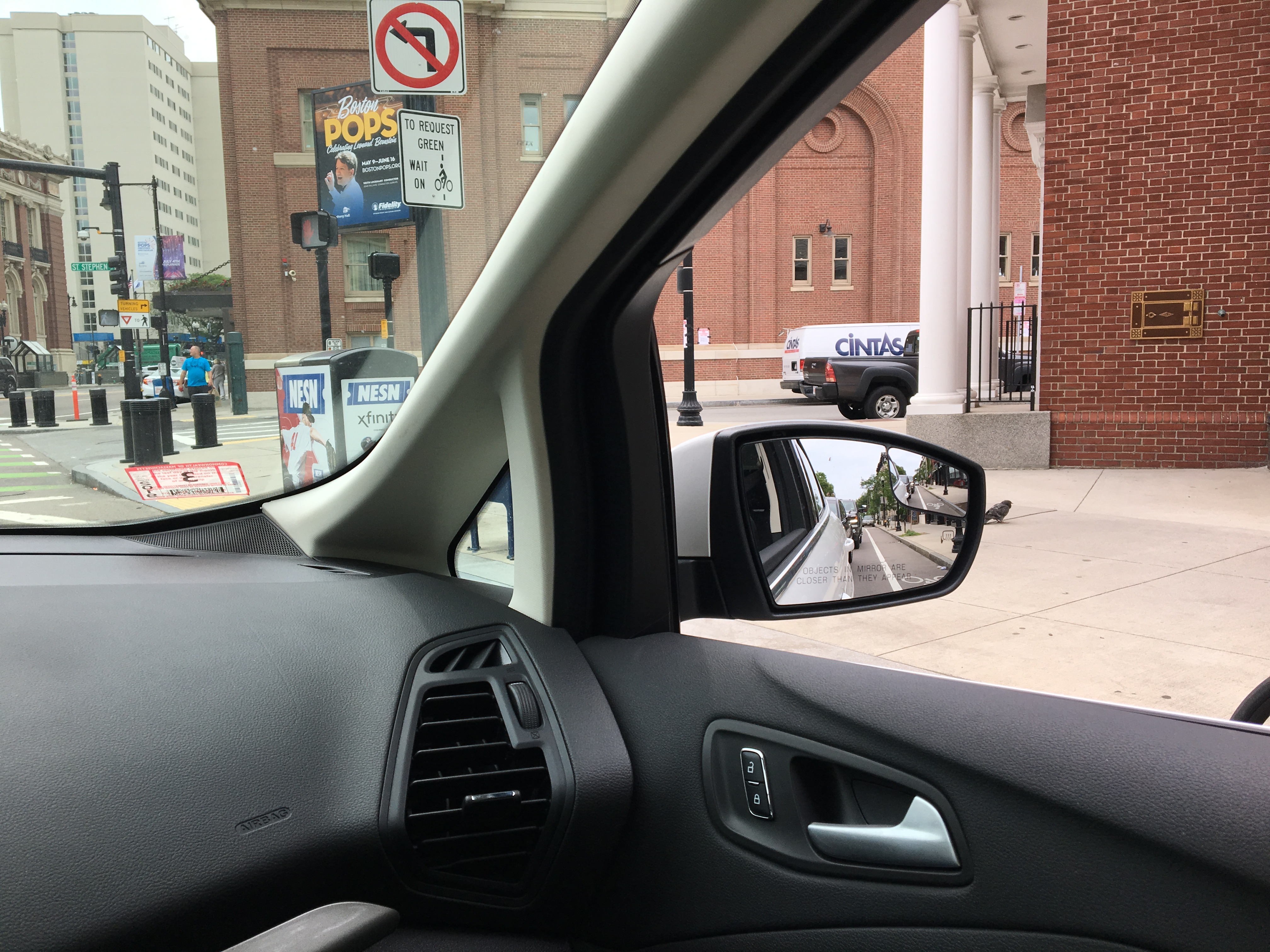 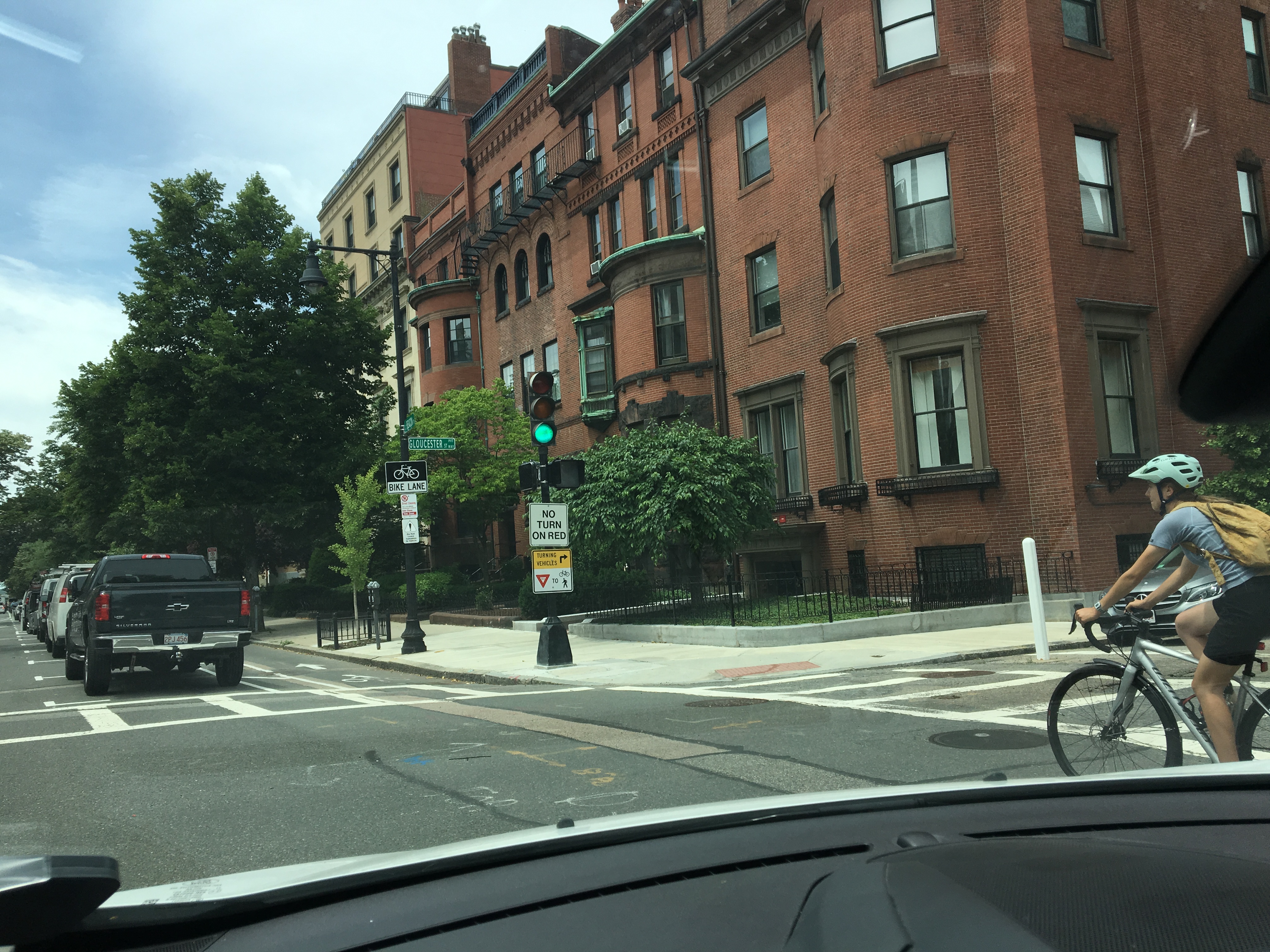 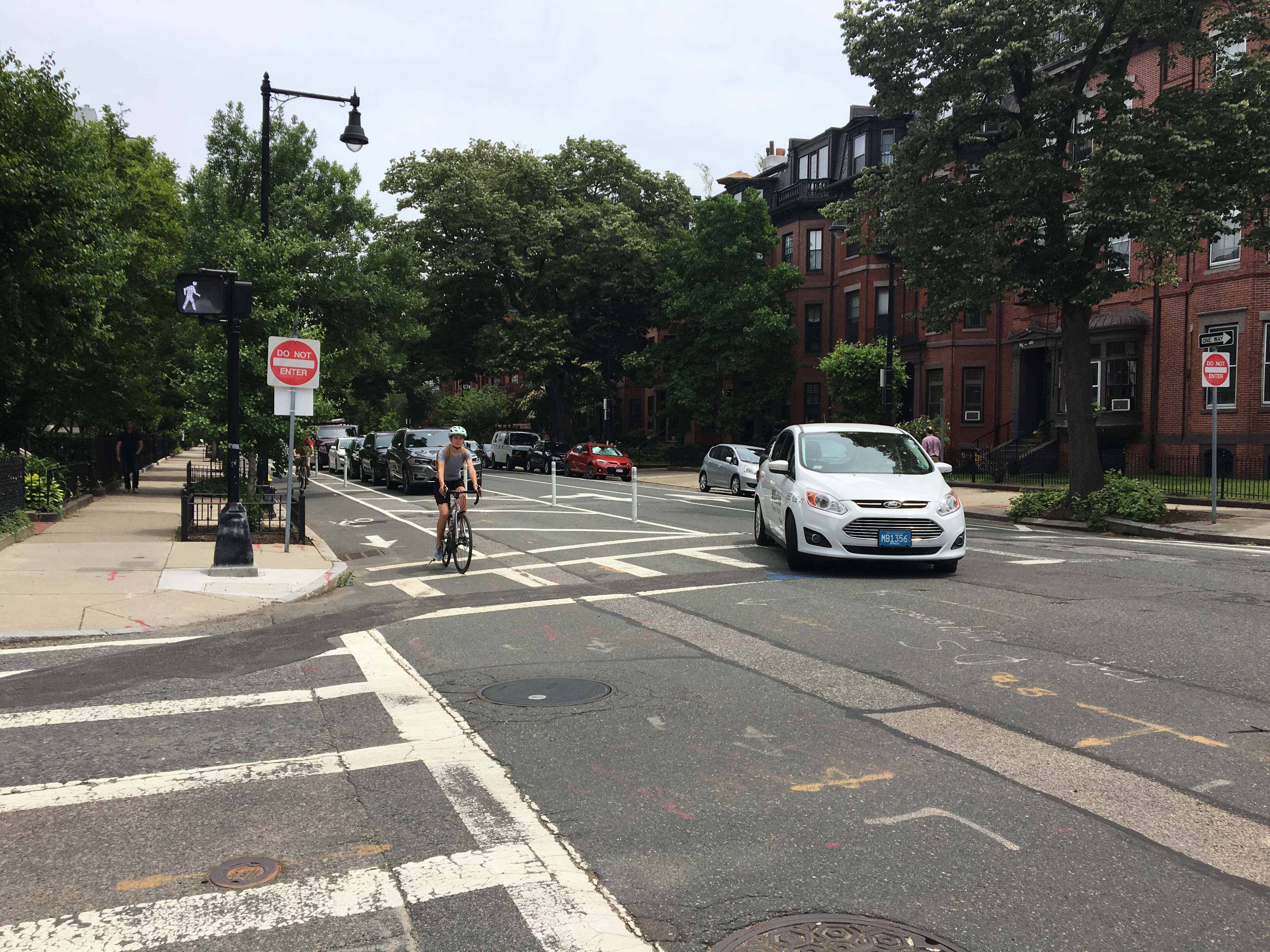 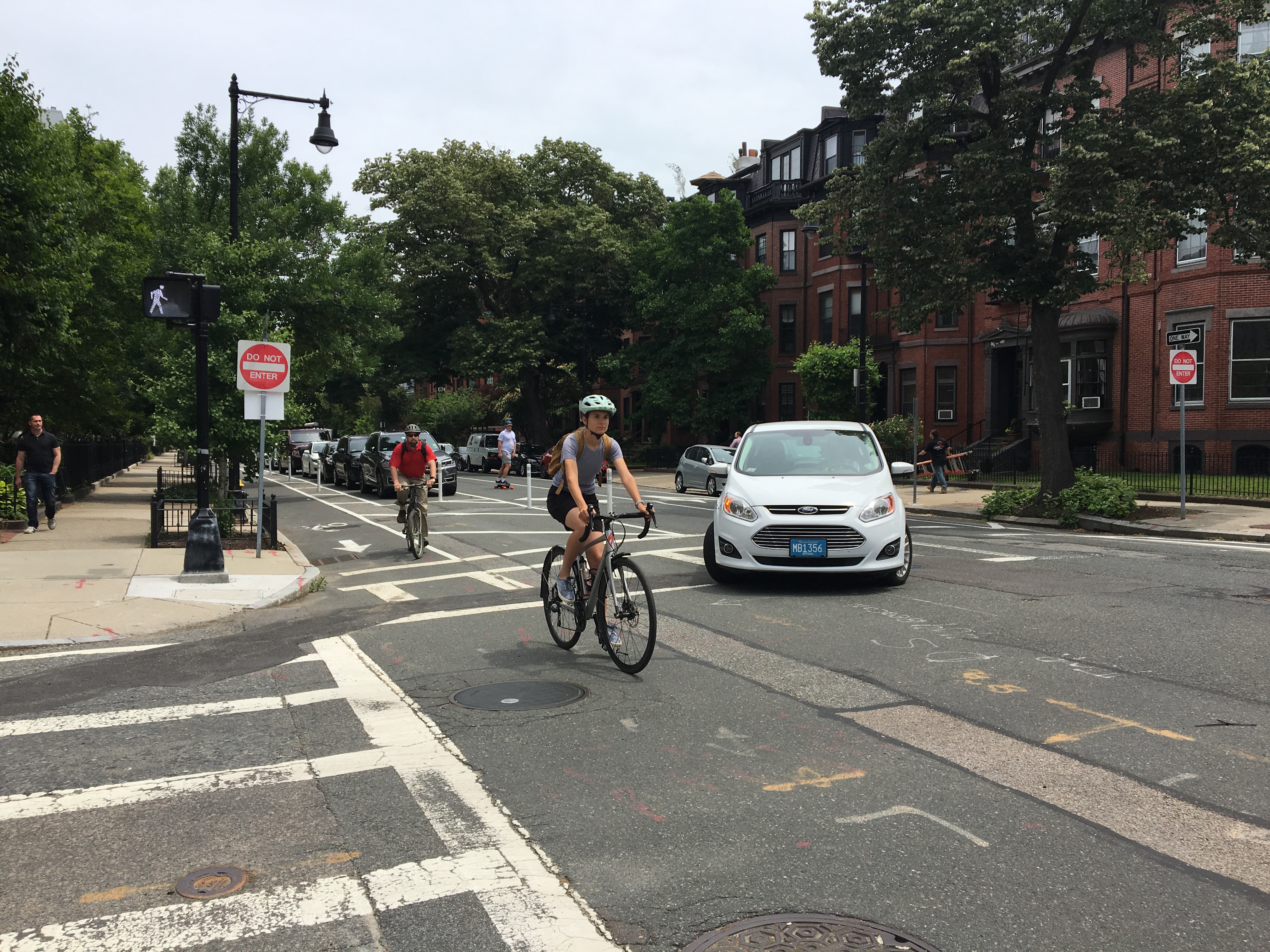 In many cases, people on bikes can use the general traffic signals. But, in some cases, we provide bike-only signals.

Bike signals are useful when our streets have:

At intersections with bike signals, cyclists should not follow general traffic and pedestrian signals. The bike signals will display the safest time for bike riders to go through an intersection.

We have two types of bike signals in the City of Boston: 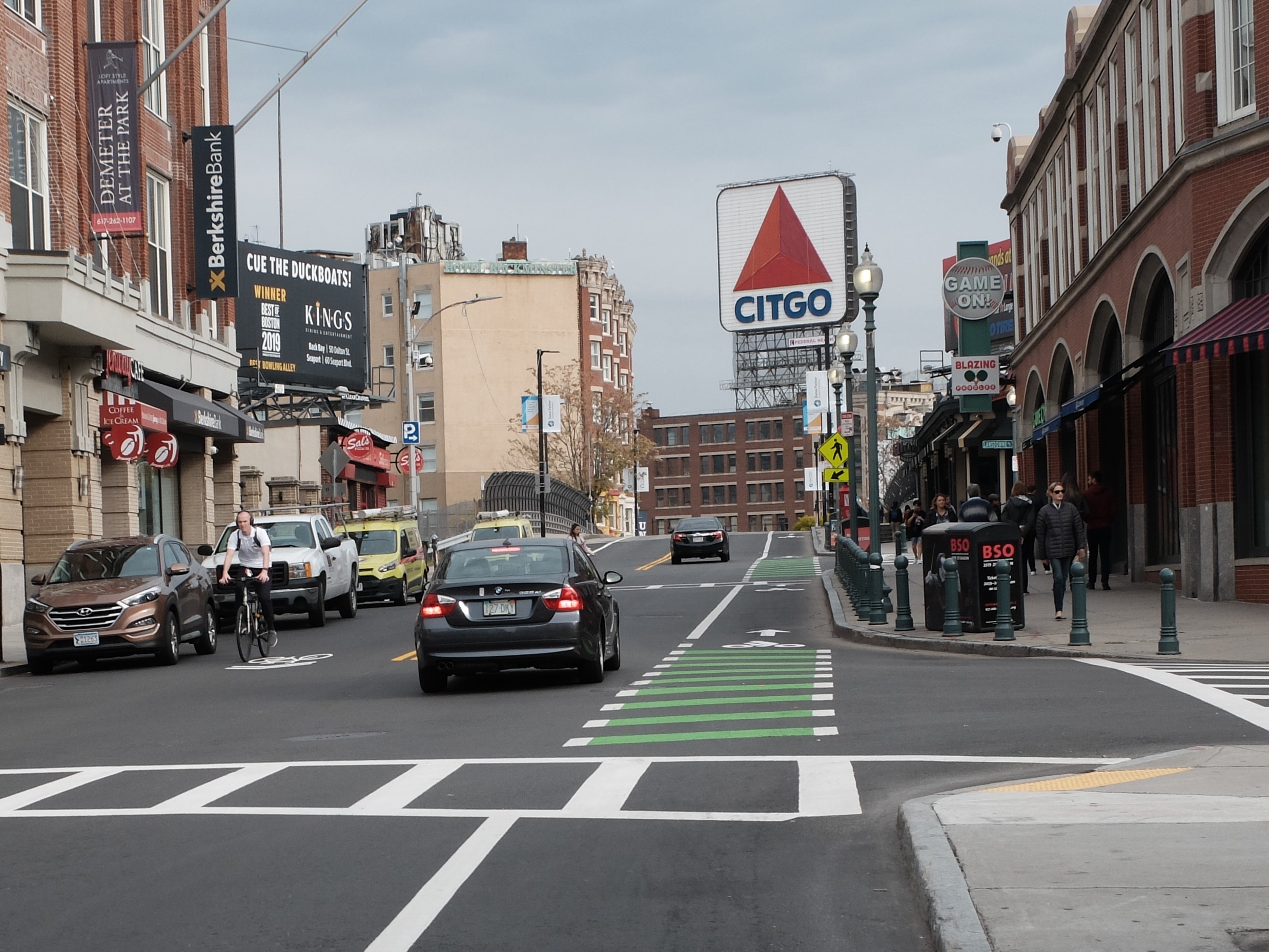 We mark our streets with green stripes where potential conflicts between drivers and bicyclists can occur. Most commonly, these stripes remind drivers of exiting driveways. They also alert drivers turning onto another street to look for people on bikes.

In some places, we use green stripes to help show people riding bikes where they should be in the street. This is especially important when they are crossing Green Line trolley tracks. 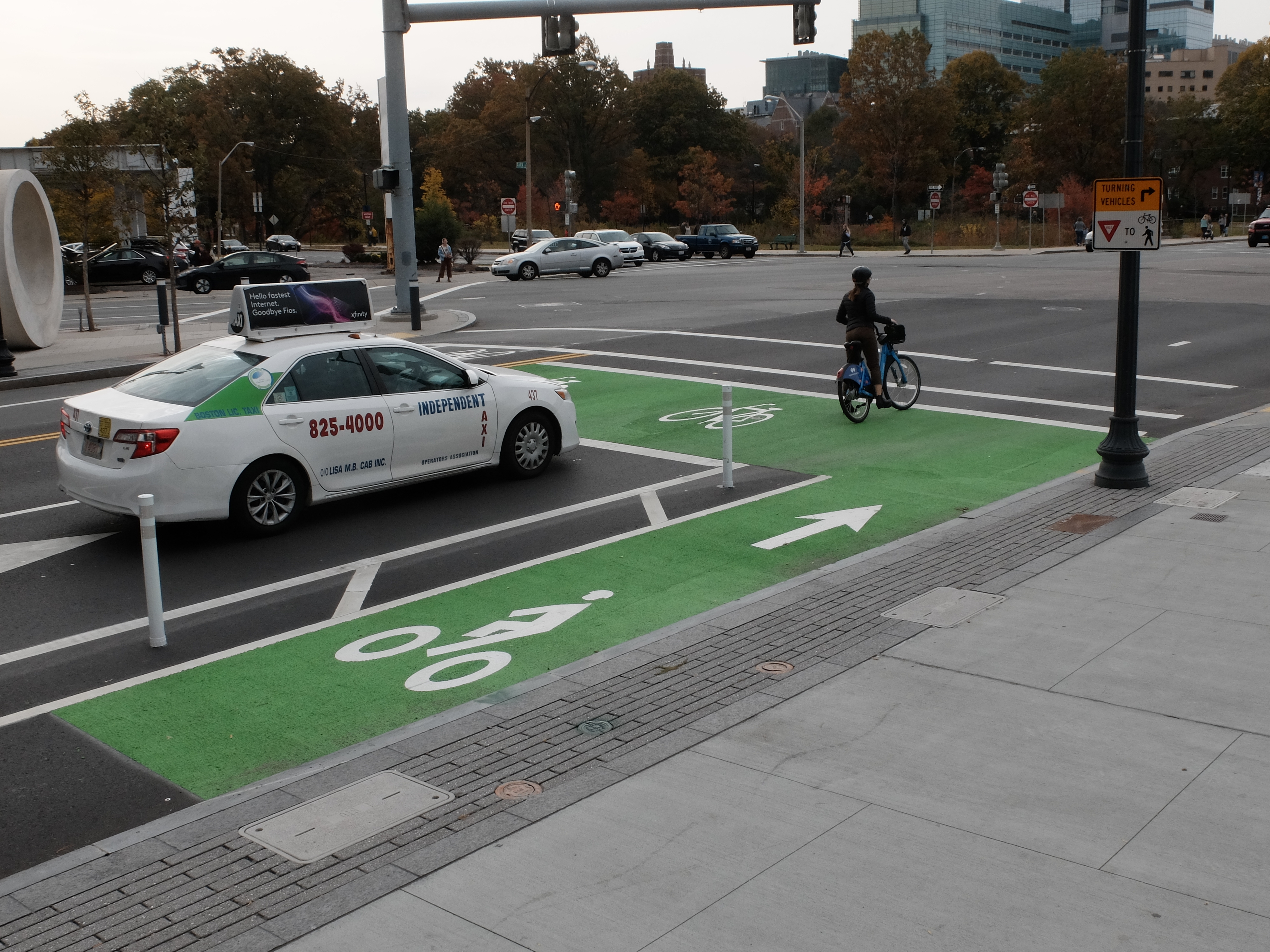 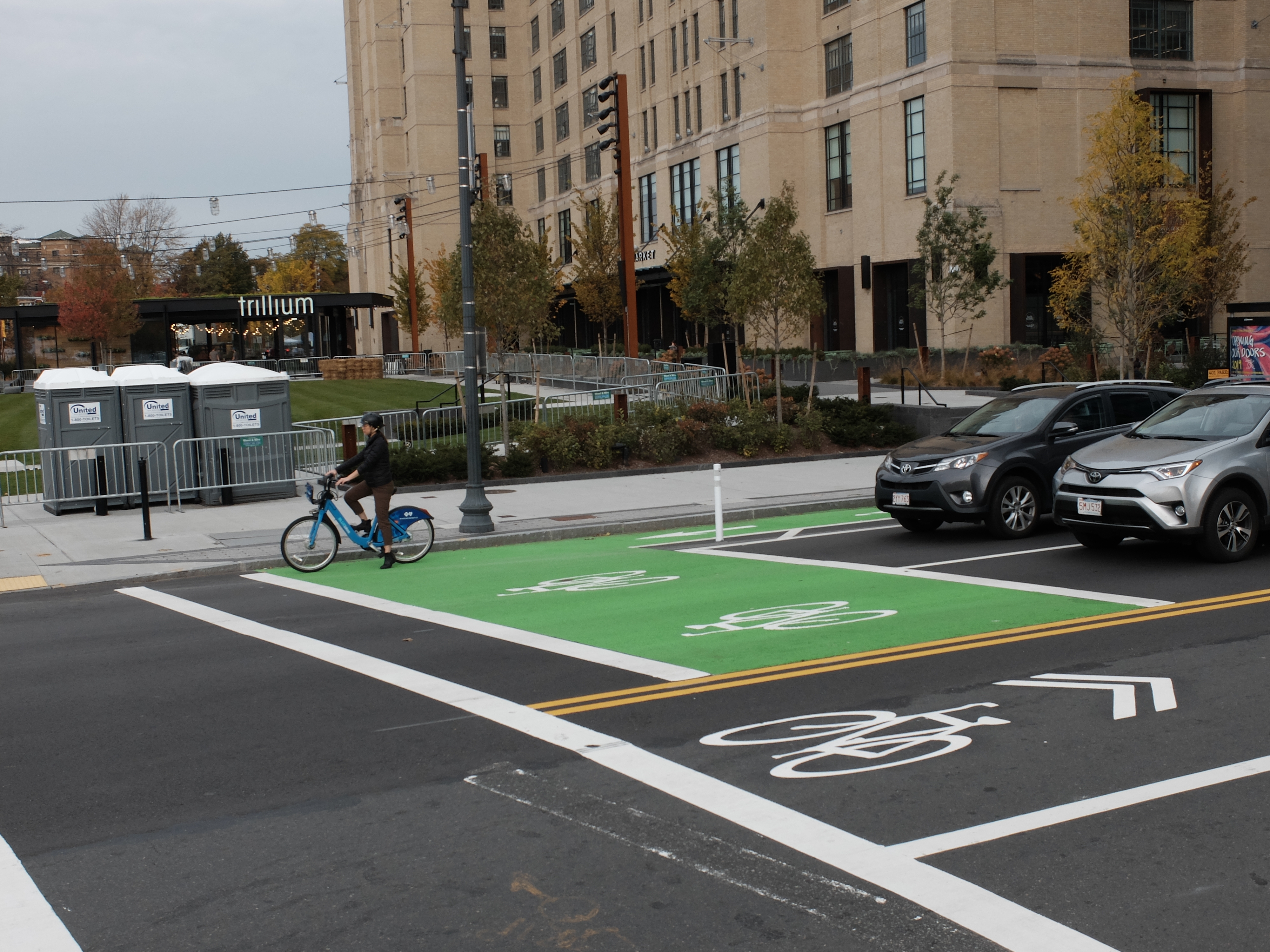 Merging across traffic on a busy street to make a left turn can be tough or scary for people riding bikes. Where possible, we provide a two-stage turn box. The box helps make that turn safer and less stressful.

Bicyclists first ride through the intersection to the two-stage turn box. Then, they turn their bikes to head in the correct direction. When the light turns green, bicyclists continue straight.

Two-stage turns are often necessary on separated bike lanes. Exiting the bike lane mid-block is generally not allowed by design.