Leo began his career in City government in 1987 as a Charlestown Neighborhood liaison in the Mayor’s Office of Neighborhood Services under Mayor Raymond L. Flynn. In 1989, Leo moved to the Boston Parks and Recreation Department where he designed recreational educational and cultural programs for the City of Boston and its residents.

Realizing a major goal, Leo became a member of the administration of the Boston Housing Authority in 1995. As a product of public housing it was important to Leo that he have the opportunity to ensure that the young people in BHA had full access to educational, athletic and cultural opportunities.  He also played a role working with the BHA Police on residents public safety concerns across the city.

In 1999, Leo was offered his current position at Boston Inspectional Services and welcomed the chance to continue to focus on his primary purpose in government which is constituent services and assistance.  This is the very basis of what we are all about at ISD.  The focus of this department is on life safety and ensuring the public health.  There are very few places in city government that impact the quality of life on every level such as we do at ISD.

Leo resides in Charlestown with his wife Diane and son Aidan. He is very active in his neighborhood, coaching Charlestown Little League, serving as a Board member of the Charlestown Boys and Girls Club, and is the current President and long–time member of the non-profit group the Bunker Hill Associates. He has also served as a high school basketball coach at Columbus HS, Cathedral HS, and St. Clement HS, being honored as Massachusetts HS Coach of the Year in 1994, 2004 and 2014 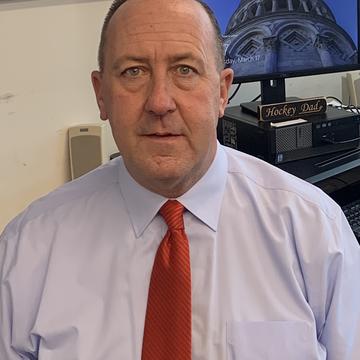