Martin J. Walsh, a lifelong champion of working people and a proud product of the City of Boston, was the City’s 54th mayor. Mayor Walsh was sworn in to serve a second term on January 1, 2018.

Mayor Walsh’s vision was of a thriving, healthy, and innovative Boston — a City with equality and opportunity for all, where a revolutionary history inspires creative solutions to the challenges of the 21st century.

The Mayor led Boston to the forefront of the global innovation economy, by attracting industry-leading private sector employers, upgrading the City’s digital infrastructure, and using technology to transform government services — from a parking meter payment app to a new City website.

At the same time, he created powerful tools for low-income workers, including a “learn and earn” job apprenticeship program and an Office of Financial Empowerment. He was the founding vice-chair of the Cities of Opportunity Task Force at the U.S. Conference of Mayors, elevating the national conversation on income inequality.

The Walsh Administration addressed the tremendous need for housing in the City with an ambitious plan, setting records for new affordable and middle-class homes. In addition, he built a state-of- the-art homeless shelter and put the City on a path to effectively ending chronic homelessness.

The Administration was been hailed by President Obama for expanding young people’s opportunities and breaking new ground in crime prevention and police-community relations.

Other milestones include the nation’s first municipal Office of Recovery Services to prevent and treat substance abuse; the City’s first Cultural Plan in a generation, to restore Boston’s identity as an arts leader; and, in a sign of strong fiscal management and economic policy, the City’s first perfect AAA bond ratings, unlocking unprecedented investments in parks, libraries, and public safety.

Finally, the Mayor invited the people of Boston to help build a blueprint for the City’s future in Imagine Boston 2030, the first citywide plan in half a century. Before taking office, Mayor Walsh served in the Massachusetts House of Representatives, where he was a leader on job creation and worker protections; substance abuse, mental health, and homelessness; K-12 education; and civil rights. He played a key role defending Massachusetts’ pioneering stand on marriage equality.

Mayor Walsh also made his mark as a labor leader. After following his father into Laborers Local 223 in Boston, he rose to head the Building and Construction Trades Council from 2011 to 2013. He worked with business and community leaders to promote high-quality development, and he created a program called Building Pathways that has become a model for increasing diversity in the workplace and providing good career opportunities for women and people of color.

Born and raised in the neighborhood of Dorchester by immigrant parents, Mayor Walsh was driven to make sure Boston is a City where anyone can overcome their challenges and fulfill their dreams. As a child, Mayor Walsh survived a serious bout of Burkitt lymphoma, thanks to the extraordinary care he received at Boston Children’s Hospital and Dana Farber Cancer Institute. His recovery from alcoholism as a young adult led to his lifelong commitment to the prevention and treatment of addiction. And while working full-time as a legislator, he returned to school to earn a degree in Political Science at Boston College.

Mayor Walsh continues to reside in Dorchester, where he shares his life with longtime partner Lorrie Higgins. 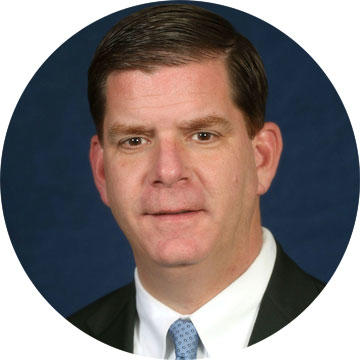