This EXTRAordinary Woman has built her business on compassion, community, and a really good cup of coffee.

Judging by customer reviews online, Boston coffee drinkers love Recreo Coffee & Roasterie. And it’s not just the caffeine they rave about. Almost every patron mentions the staff, the atmosphere, and the mission, describing Recreo as “SO welcoming,” a “neighborhood jewel,” and “truly one big family.”

At the head and the heart of that big family is Miriam Morales. Morales and her husband, Héctor, own Recreo. They source their coffee from El Recreo Estate Farm in Jinotega, Nicaragua. It’s been in Morales’s family for 60 years; her parents continue to run it today.

Growing up, Morales never really envisioned herself taking on the family business. Instead, she left Nicaragua to attend Northeastern University and became an industrial engineer. She spent 20 years as a Minister, overseeing a congregation of 500 members in the Boston area. But six years ago, her plans changed.

When her father was injured in an accident, she was compelled to help her family more directly with the farm and the coffee business. “It all started with the motivation of helping my family,” she says. At first, she and Héctor expanded her parents’ distribution network, selling unroasted coffee to other U.S. roasters. Then they started tabling at farmers’ markets in the Boston area.

“That’s when we started building a following,” she says, “people really loved our coffee, so we started roasting. We had heard about the help that the City of Boston gives to small businesses, and through Main Streets, we were able to find this location in West Roxbury,” she recalls. With growing demand and positive feedback, they opened their first cafe in 2015.

By all accounts, Recreo makes great coffee, but it’s Morales’s compassion that drives the business. Forty families live and work on Recreo’s farm in Nicaragua year-round, and another 200 farmers work there seasonally. After Morales pays her operating expenses, all profits go toward resources for them, particularly for education and healthcare.

There are two schools onsite, the Children’s School and the School for Technical Training. “If you're in the farm and you want to learn how to read and write so you don't have to be a coffee picker for the rest of your life, you can go to school on the farm,” Morales explains. There’s also a small clinic with a full-time nurse on the farm, providing residents with services they’d otherwise have to travel hours to receive. Morales hopes to expand the healthcare center and further develop the schools. On her most recent visit, she brought funds to install a solar-panel system on the Children’s School to power computers for the kids. She’s also saving up to get a portable ultrasound machine for the clinic.

Morales encourages her Boston-based baristas to share those stories with customers. “I think there's a lot of good coffees out there, but I want people to know that they’re not just drinking coffee, they're helping,” she says.

Even better than telling consumers about their impact is showing them. So, Recreo developed Origin Trips, which are now offered for interested customers about once a year. The group travels to Jinotega and spends four nights on El Recreo Estate Farm. They engage directly with the people, the land, and the labor behind their daily cup of coffee. “I want to show them that even just what they spent on that cup of coffee matters. And I want to inspire people to really care about where they get whatever they get,” Morales says, ”because it's going to count. It's not just going to give you a product, it's going to count.”

Recreo’s genuine commitment to social responsibility and ethical production has resonated with customers and fueled its growth. When the City of Boston announced plans to include a coffee shop in its renovated City Hall lobby, a number of Recreo’s devotees emailed Morales and insisted she apply for the spot. After a proposal, a presentation, and rounds of interviews, Recreo won the bid. Their City Hall location celebrated its one-year anniversary in June of 2018.

With two cafes to manage now, Morales starts her days at 5 a.m. and splits her mornings between West Roxbury and City Hall. She works side by side with her baristas. She strives to cultivate community at every level — on the farm, in the City, and behind the counter. She makes a point to emphasize how much she respects and cares for her baristas. “I could never do what I'm doing without my team, and I'm not just saying that to say it. I totally believe it,” she says. “They come to my house, we have dinners together, we celebrate their birthdays. We're a family.”

Since stepping into this new role six years ago, Morales has held her business to a high moral standard. She brings care and consideration to every decision. Even the bags of ground coffee, with a printed image of two hands cradling a pile of coffee beans, showcase Recreo’s values. “They're my dad's hands,” Morales explains. “Anything that we do, it's our family. I do this with my whole heart.” 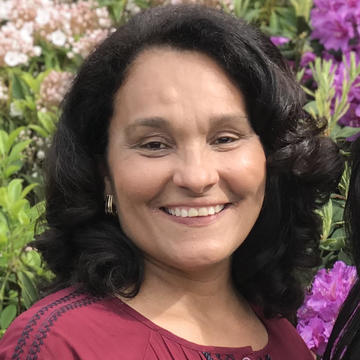