The office will support the nearly 3,000 individuals who return to Boston each year from incarceration.

Building on Boston's commitment to creating opportunities for all residents, Mayor Martin J. Walsh today launched the Office of Returning Citizens, a newly formed office that will support the nearly 3,000 individuals who return to Boston after being released from state, federal and county facilities each year, as well as others who were previously incarcerated. The Office of Returning Citizens will be part of the Office of Public Safety, which was created in 2014. 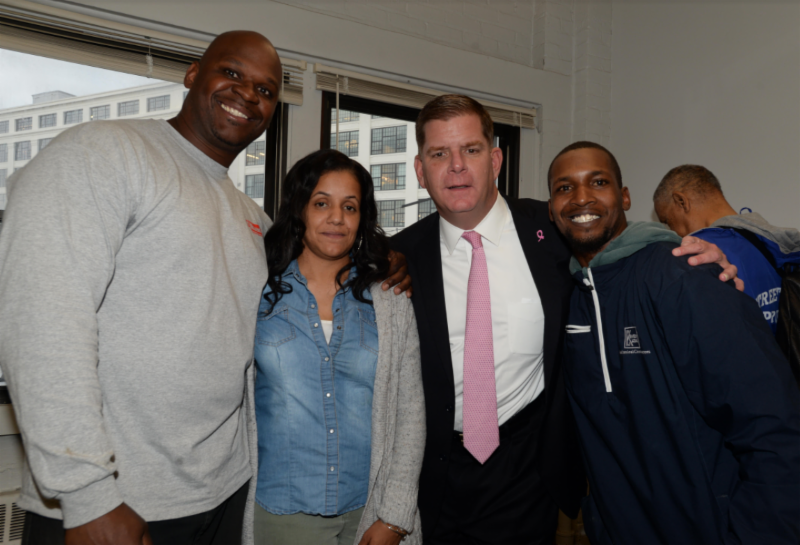 "No one should be defined by the hardest time in their lives. Everyone deserves a second chance and a fair opportunity at success. That's why we've created the Office of Public Safety, and continued our commitment to opportunity with the Office of Returning Citizens," said Mayor Walsh. "For those who have been incarcerated, accessing things like housing, jobs and healthcare can be difficult. The Office of Returning Citizens will connect returning residents to resources throughout the City, making Boston safer and stronger -- a better Boston for everyone."

Earlier this month, Mayor Walsh appointed Kevin Sibley as Director of the Office of Returning Citizens. Sibley brings over 18 years of experience in human resources, program development and grant funded initiatives specific to the well-being of underserved individuals to his new role.

"I know the power a second chance can have on a person's life, and I look forward to supporting every individual in need of that chance under the leadership of Mayor Walsh," said Kevin Sibley, Director of the Office of Returning Citizens. "I look forward to helping those residents who need a helping hand, giving them the resources they need to lead a positive life here in Boston."

"I grew up in Dorchester, and spent eight years in and out of being incarcerated. I know that support, and knowing where to go, are crucial to breaking this cycle," said Romilda Pereira, a speaker at the Office opening. "I have a different vision of life now than I did back then, and am working hard for a better future for my daughters. I appreciate what Mayor Walsh is doing, and am happy that someone is recognizing that just because you were locked up, doesn't mean your past should follow you forever. I'm glad that opportunities are being put in place for people, like me, to have a chance to change their lives."

The Office aims to help individuals who have taken healthy steps and prepared themselves to move past the consequences of their past actions, and coordinate the work done by Boston's social service and law enforce partners. This office will incorporate best practices from local, state, and federal partners and include a review of similar offices in Washington D.C. and Philadelphia.

According to The Boston Reentry Study from Harvard University, individuals reentering society need assistance accessing resources to help them find permanent housing and employment. The new Office of Returning Citizens aims to empower men and women reintegrating into their communities to reach full potential as individuals, family members and residents of Boston.

"As a social worker, and now as the leader of YouthConnect, I see the need for stabilization programs every day," said Andrea Perry, Executive Director of YouthConnect. "For those leaving incarceration, trauma and a lack of resources hinders residents from successfully reentering society. The Office of Returning Citizens is a crucial step that will help Boston's residents connect, or reconnect, to the comprehensive resources they need to reintegrate successfully into their families and communities. I'm thankful for Mayor Walsh and Boston's leadership on this important program, and look forward to collaborating with them in the future."

Mayor Walsh created the Office of Public Safety in 2014 with the mandate of establishing cross-agency and cabinet coordination to tackle the challenging and complex problems in our neighborhoods that lead to and perpetuate violence. Part of the work of the office has included looking at services and opportunities available for individuals that are returning home. The new office will help fill gaps that exist within local, state, federal and county efforts.

Previous successful programs the City has established for those leaving incarceration include Operation Exit, Boston's reentry program. Mayor Walsh established Operation Exit in 2014 to help at-risk residents, or those with a criminal background, by providing the knowledge and skills required for entry into an apprenticeship program. Through career readiness and occupational skills training, the intensive training program provides hands-on learning experiences with peer-to-peer mentorship to prepare participants for good careers.

The Office of Returning Citizens will be located at 22 Drydock Ave. in Boston's Seaport District, a neutral location designed to be accessible for all residents. For more information on the Office of Public Safety Initiatives, visit boston.gov.