On this day in 1721, Dr. Zabdiel Boylston inoculates his son against smallpox

On June 26, after smallpox broke out in Boston, Dr. Zabdiel Boylston inoculated his 13-year-old son with the controversial smallpox vaccine.

In 1721, smallpox broke out in Boston, threatening to devastate the City.  Zabdiel Boylston, a Boston doctor, learned of the smallpox inoculation from Cotton Mather. At the suggestion of Mather, he agreed to inoculate Bostonians. On June 26, he inoculated his son and two of his slaves against the disease.

Zabdiel also inoculated between 180 and 250 other Bostonians. Many feared that the smallpox inoculations would only  spread the disease. They violently opposed Boylston’s work, and his opponents even threatened his family. At one point, one of his opponents threw a hand grenade into his home. Shortly after inoculating his son, Boylston was arrested. Authorities released him after he promised to only inoculate with government permission.

By the early 1800s, most Bostonians understood that inoculation was a valuable tool. But, despite the success of inoculation, smallpox still plagued Boston and other cities. Boston regularly quarantined smallpox patients on Rainsford Island in Boston Harbor. Officials hoped to prevent the spread of the disease to the larger City. Most of the patients on the island were from quarantined ships. 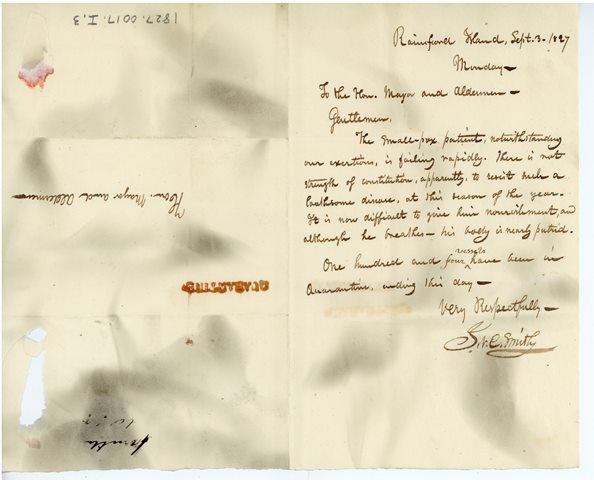 The above letter, from 1827, documents the condition of a quarantined patient on Rainsford Island.  The patient is very ill, and the letter states that "although he breathes, his body is nearly putrid." The letter also notes that 104 vessels are currently in quarantine. Note that the letter is smudged with smoke. Letters sent from Rainsford Island were regularly “purified” with smoke. This was another effort to prevent the spread of the disease.

Want to learn more about the 1721 smallpox outbreak and the fight over inoculation? Visit the Harvard University Open Collections Program's website.