Digging into the digitizing of Boston's Hero Squares

Have you ever walked by a Hero Square and wondered who it was named for? The City Archives is digitizing the documentation for Boston's Hero Squares. Now, you can learn more about the squares, parks, and playgrounds named after Boston's heroes.

Boston has more than 1,200 Hero Squares located across the City. Each Hero Square is dedicated to a military service member killed in action.  At the City Archives, we have the dockets for each Hero Square in our City Council proceedings. The dockets give information about the service member who's name is on the square. Boston has not only named squares after her heroes, but also parks and playgrounds. We have documentation of any squares, parks, or playgrounds named after a Boston hero.

Some of the dockets simply give the name of the service member and a short summary of their service and when they died.  Other dockets, however, tell a story about the service member. Ernest Carraher was known as "Boots" and died at the Battle of Verdun in WWI. In 1921, when City Councilor James Moriarty proposed that they rename the pier at City Point "Carraher's Walk," because it was one of Ernest Carraher's favorite places to walk in Boston. Moriarty also gave details about Carraher's death at Verdun. Carraher died when he made a dangerous trip to the front lines to try to scout out the safest route for the soldiers under his command.  He received the Distinguished Service Cross for his heroism. 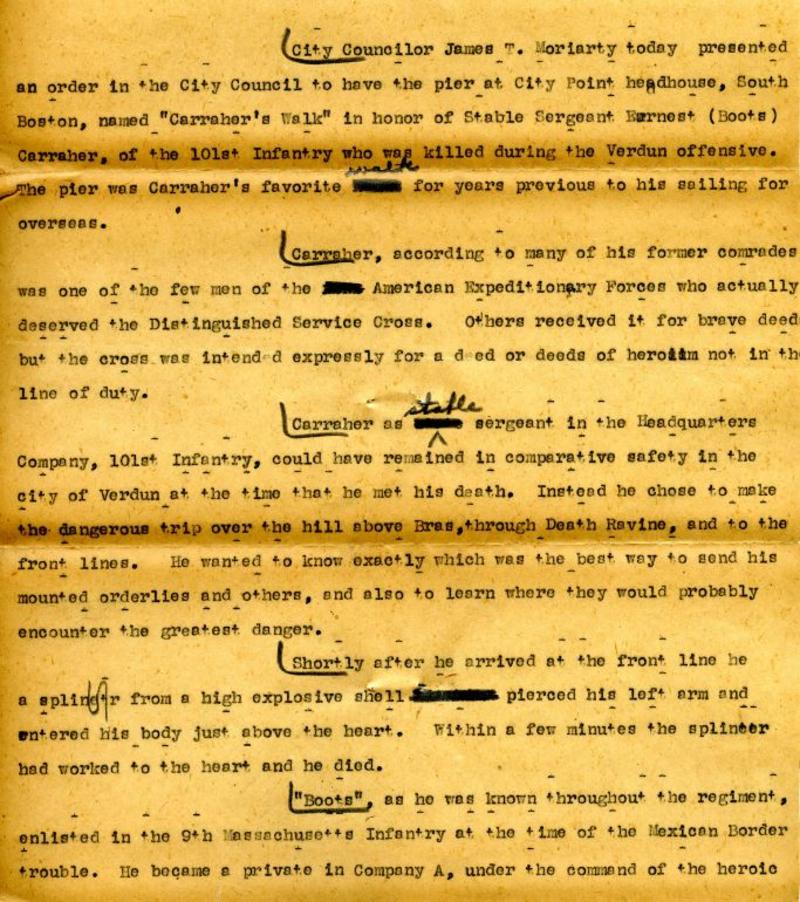 The documentation also includes information about heroes who don't have a square.  The dockets include both accepted and rejected proposals for Hero Squares. In the 1920s, some City officials declined to rename squares that already had a well-known name. In 1921, the City Council ordered that Monmouth Square be renamed Agnes Queenan Square after Agnes Queenan of the Army Nurse Corp who died in action on November 7, 1920. Mayor Andrew Peters vetoed the order because the square was already commonly known as Monmouth Square. However, we still have the docket proposing Agnes Queenan's Square.

This project is just getting started! We've currently digitized the documentation through 1924, which covers almost all World War I Hero Squares. In the months to come, we'll be digitizing more Hero Square dockets. Keep an eye out for the dockets of squares dedicated after WWII, the Korean War, and the Vietnam War.  You can see what we've done so far, by browsing the Hero Square dockets. You can also use the Veterans Services Hero Square Database to find information about where Hero Squares are located and who they are named after.