Mayor Janey signed an executive order declaring the second Monday of October to be Indigenous Peoples Day in the City of Boston.

Mayor Kim Janey today signed an executive order establishing Monday, October 11, 2021 and every second Monday of October as Indigenous Peoples Day in Boston. As part of this effort, the City of Boston is committed to recognizing the Indigenous history, celebrating cultures, strengthening relationships, denouncing colonial past, and increasing dialogue with local tribes to foster reconciliation and support for the rights of Indigenous people. 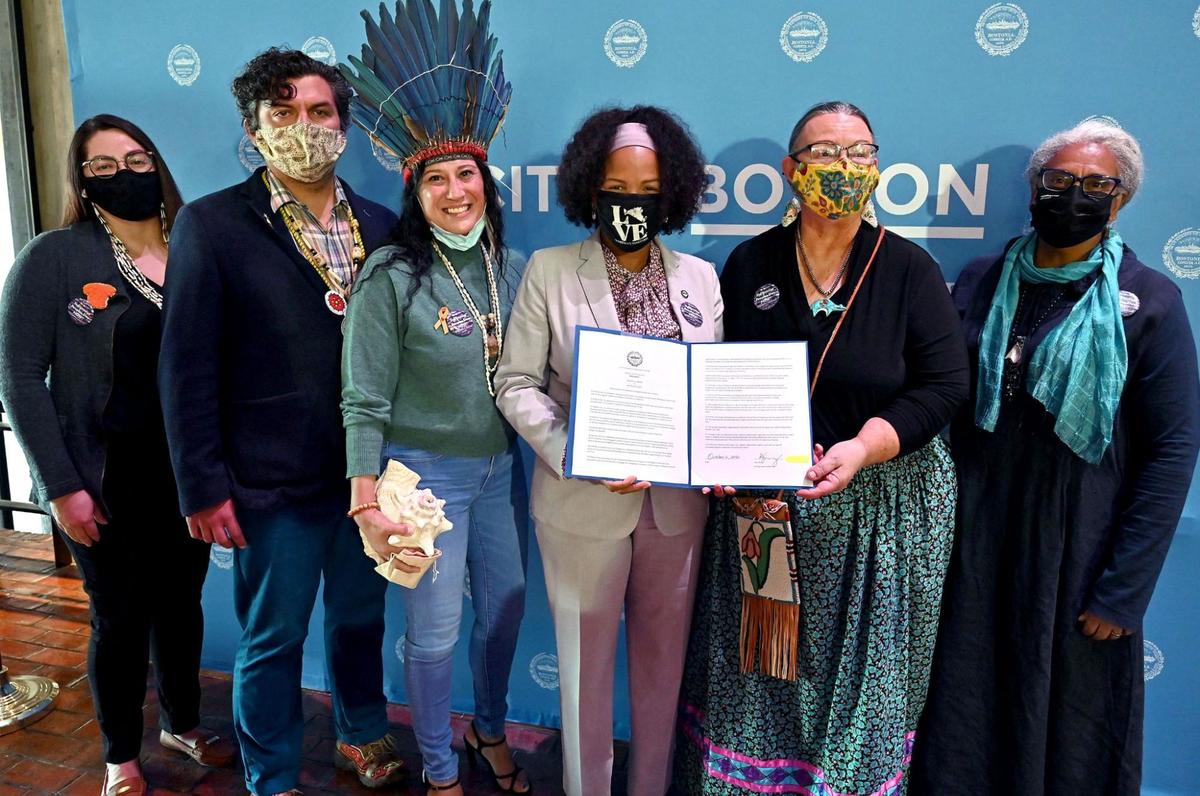 Indigenous Peoples Day recognizes the history of the land where Boston sits, the traditional homeland of the Massachusett Tribe and the home of neighboring Wampanoag and Nipmuc tribes. Mayor Janey encourages local businesses, organizations, and public institutions to use this day as a moment of reflection of historic policies that actively suppressed Indigenous cultures.

“Indigenous Peoples Day celebrates the rich cultural legacies of our Indigenous communities while also declaring Boston is ready to work with our neighbors to create a more just future,” said Mayor Kim Janey. “With Boston’s long history comes an opportunity and obligation to acknowledge the difficult parts of our past and dedicate ourselves to fostering a more equitable City. Observing Indigenous Peoples Day is about replacing the colonial myths passed down from generation to generation with the true history of the land upon which our nation was founded.”

Wednesday’s signing at Boston City Hall is a result of collaboration with the United American Indians of New England (UAINE), the North American Indian Center of Boston (NAICOB), and members of the Massachusett Tribe - all a key part of increasing the City’s engagement with Indigenous communities in Boston.

Boston take the important step of recognizing and celebrating Indigenous peoples in Boston, the Americas, and around the world. Many thanks to Mayor Janey and the many members of her administration who worked with the indigenous community to make this happen.”

“As someone who was born in Boston but never felt that Indigenous people were welcomed by the city government, I am very happy about Mayor Janey’s actions today,” said Kimimilasha James, an Aquinnah Wampanoag youth leader with United American Indians of New England. “Indigenous Peoples Day brings a positive message about Indigenous survival and resilience in the face of genocidal actions directed against Indigenous peoples since 1492. It’s a day to learn about and celebrate Indigenous history and contemporary Indigenous peoples and cultures. And it is just a first step for the city to begin to build relationships with Indigenous people and begin to address the many injustices faced by Indigenous people here in Boston and elsewhere. It is time for us to stop being largely ignored and erased.”

“As a First Nation Migmaw mother, I am pleased that the city of Boston is honoring Indigenous Peoples Day,” said Gloria Colon, Outreach Coordinator for the North American Indian Center of Boston (NAICOB). “Growing up in Dorchester I experienced racism, I was targeted just for being Indigenous. While our city still has work to do to make all people safe, it is important that Indigenous children are appreciated and included.”

“We have been working for several years to get Boston to properly acknowledge and be in relationship with Indigenous nations and people here,” said Mahtowin Munro (Lakota) from United American Indians of New England and the statewide Indigenous Peoples Day campaign. “We wish to thank Mayor Janey and her staff for listening to the concerns of Indigenous people in the city and for her expressed commitment to Indigenous sovereignty and racial justice for Indigenous peoples in the Boston area. She and her staff have set an example as well by thoughtfully consulting and considering future steps that need to be taken by the city. We are elated that she has declared October 11, 2021 to be Indigenous Peoples Day in the City of Boston.”

“I’m so proud to have a Mayor who listens to community and works to make Boston an inclusive city,” said Raquel Halsey, member of the Mandan, Hidatsa, and Arikara Nation and Executive Director of NAICOB. “As a service provider, we have heard countless stories of Indigenous people feeling unwelcome in Boston, and they have felt the lasting consequences of genocide and colonialism everyday. Recognizing Indigenous Peoples Day is an important step towards addressing the lived experiences of many residents and building trust between municipalities and Indigenous nations.”

“We must commend the tribal leaders, Indigenous activists, and the City of Boston’s internal working group for their dedication towards the action steps to enable the health and wellness of our community members,” said Jean-Luc Pierite, member of the Tunica-Biloxi Tribe, president of NAICOB, and member of the executive committee of the Black Mass. Coalition. “NAICOB, following our over 50 year tradition and commitment to the New England Native American community, looks forward to being a partner in ensuring improved government-to-government relationships.”

Boston joins over two dozen Massachusetts cities and towns in recognizing Indigenous Peoples Day, a movement that has garnered allies within the Italian American community.

“We also call on the MA Legislature to pass bill H.3191/S.2027, ‘An Act Establishing Indigenous Peoples Day’," Leavell continued, “to officially designate the second Monday of October as Indigenous Peoples Day across the Commonwealth. Italian Americans for Indigenous Peoples Day believes that a holiday that celebrates the resilience of Indigenous peoples is far more truthful and uplifting than one that honors a man whose legacy is characterized by conquest, slavery, and genocide. Any association with Christopher Columbus diminishes our culture and does not honor the struggles and contributions of our ancestors or the long tradition of human rights activism in the Italian American community.”

As a way to turn this new day of recognition into action, an internal working group of City employees has developed a series of proposals as the beginning of a long-term healing process, in collaboration with Indigenous community leadership. Those proposals include recognition of Indigenous Peoples Day; land acknowledgement; expanded capacity within the City to engage the Indigenous community and to support Indigenous youth and families; increased public representation of Indigenous peoples in the City; and an increased focus on housing, economic and workforce development for tribal members.