Mayor Martin J. Walsh today signed the City's $3.15 billion Fiscal Year 2018 budget, which through strong fiscal management and strategic savings initiatives allows for further investment in quality City services in neighborhoods across Boston, and builds on the success of existing City programs. During a signing ceremony hosted outside of a building marked by graffiti, Mayor Walsh joined members of his Cabinet and City staff, neighbors, community partners and local elected officials for the signing ceremony, that concluded with the graffiti busters team removing the graffiti from the wall.

"This budget invests in our broadest vision of the future and in the details that support quality of life everyday," said Mayor Walsh. "Behind each line in the budget is a person and a neighborhood benefiting from these city services. It reflects the voices and the values of the people of Boston, and it is one that we can be proud of as a City." 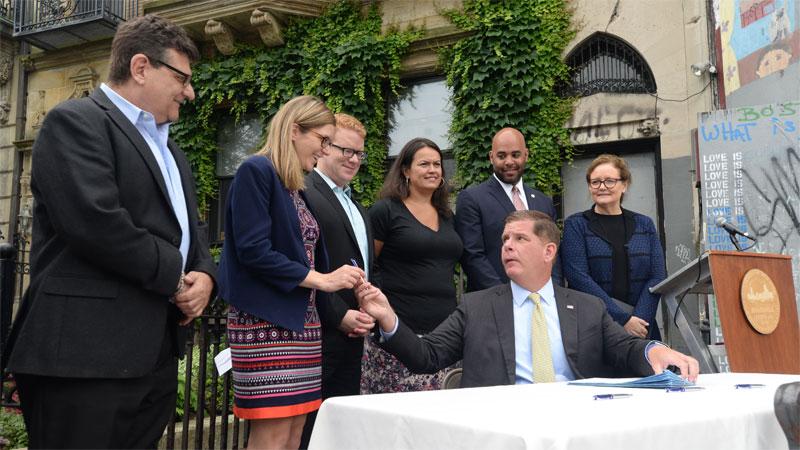 The $3.15 billion budget proposal represents an increase of $148.5 million, or 5 percent, over the FY17 budget, and follows 27 City Council hearings that identified opportunities for further targeted investments, while still balancing sustainability and fiscal responsibility. Investments in this budget are made possible due to savings initiatives launched under this Administration such as reduced overtime hours, health care cost containment reforms,  and lower debt service costs achieved as a result of the City's triple A bond rating.

"The FY18 budget expands investment across City departments, improving fire safety, providing expanded learning opportunities to the City's children, and providing the resources to make our parks and streets safer and cleaner," said David Sweeney, Chief Financial Officer for the City of Boston. "Because of Boston's robust economic development climate, the Mayor is able to build new firehouses, invest one billion dollars in school buildings, expand Vision Zero, and incorporate more Art into our public assets."

"As the Chair of the City Council Committee on Ways and Means, I was honored to lead the Council's review of this year's budget with a focus on providing a responsible and sustainable financial blueprint for our city," said City Councilor Mark Ciommo. "In an era of gridlock and divisiveness at the federal level, and financial uncertainty in our state government, the City of Boston's duty to provide a stable fiscal outlook has never been more important. I have always said that a city's budget reflects its priorities; this year's budget showcases Boston's commitment to its students, seniors, and safe streets for families across the city."

The Boston School Committee approved a $1.061 billion budget for the Boston Public Schools (BPS) , which is projected to increase to $1.081 billion once collectively bargained cost increases are added, the largest appropriation in BPS history. That represents a projected $40 million increase since last year, and a $143 million increase since Mayor Walsh took office. In total funding increases for education surpasses all other areas combined. Funding directed to schools, will increase by almost 4 percent, a $25 million increase over FY17, even before employee collective bargaining increases are negotiated. In total, with this budget, staff levels at BPS will have increased by approximately 250 since Mayor Walsh took office in 2014.

Mayor Walsh's Administration will continue ensuring that city streets are clean by adding a full-time hokey (street cleaner) to every Public Works District, to help patrol neighborhoods, empty our litter baskets, and pick up trash. In addition, to improve safety and expand access to our streets, Boston is launching a citywide, multi-year campaign to bring all crosswalks, lane markings and bike lanes into a good state of repair.

Mayor Walsh will double the capacity of the Mobile Sharps Team to pick up more improperly discarded hypodermic needles, due to an increase in requests submitted through 311. Over 20,000 needles were collected by the team in 2016.

Other investments in health and safety include:

The budget supports Housing a Changing City - Boston 2030, the Walsh Administration's comprehensive plan to accommodate Boston's rapid growth and stabilize the housing market over the next 15 years. By combining the City's annual $7.25 million general fund investment in housing with federal grants, state, grants and developer fees, the City leverages a wide variety of source to invest in the creation and preservation of affordable housing Citywide.

Following on the successful creation of the Office of Housing Stability last year to assist Boston residents experiencing housing crises, programming will be expanded in FY18 by offering training for both landlords and tenants, developing a tenant orientation guide, and funding families in need of emergency placement.

To support the Mayor's Action Plan to end chronic and veteran homelessness, Boston's Way Home, the the City will provide additional support services for veterans not eligible for veteran's affairs programs and modify the City's Homebuyer Financial Assistance Program to provide down payment assistance to veterans.

As a response to federal funding cuts, the City will provide additional resources to BPHC to ensure that the city's homeless shelters continue to operate 24/7. Moreover, in recognition of the U.S Department of Housing and Urban Development's "Housing First" approach to ending chronic homelessness, the FY18 budget will support rapid rehousing programs that focus on helping households obtain permanent housing as quickly as possible.