Notes from the Archives: Mary Dyer executed #onthisday in 1660

On this day in 1660, Mary Dyer was executed on the Boston Common for defying her banishment from Boston.

Mary’s execution is one story in a larger narrative of frequent religious clashes in Boston's early days. Her death is often linked to the easing of anti-Quaker laws in Boston. 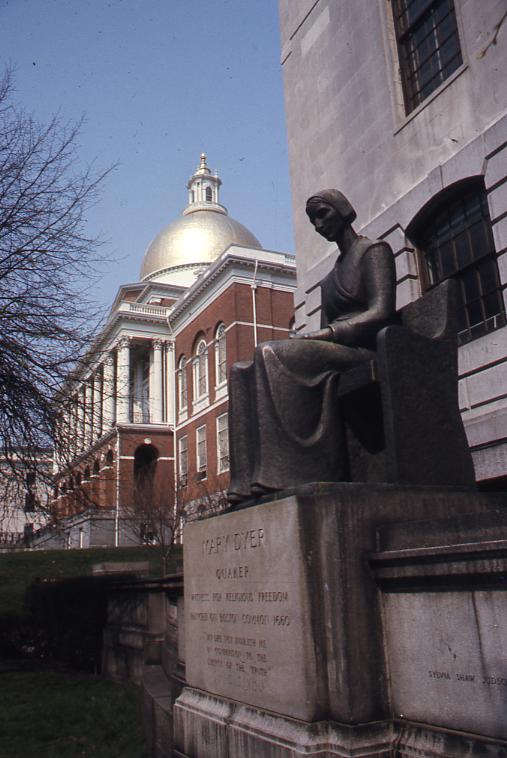 Mary Dyer was born in England and emigrated to Boston with her husband in about 1635. The Dyers, like many others emigrating to Boston, were fleeing religious persecution in England. Shortly after arriving in the Massachusetts Bay Colony, the Dyers joined the church in Boston.  Less than a year later, the Dyers became embroiled in a theological controversy called antinomianism. This controversy engulfed the Boston church between 1636 and 1638 and tore it apart. Boston's leaders took dissenting community members to trial for their beliefs. But, dissenters typically refused to change their convictions.

In the midst of the controversy,  Mary gave birth to a severely deformed stillborn child.  Common cultural beliefs of the time held that physical deformities indicated spiritual unfitness. Boston's church leaders exhumed her child's grave. They declared the child's deformities both a sign and result of Mary's deformed religious beliefs. Shortly after the exhumation, the Dyers left Boston for Rhode Island with other antinomians. These included Anne Hutchinson and John Wheelwright.

In the early 1650s, Mary Dyer returned to England where she was introduced to the Society of Friends. They were widely known as the Quakers. She became a devoted Quaker, committed to spreading her new found spirituality.  Boston’s Puritan establishment did not tolerate Quaker proselytism. When Dyer returned to Boston in 1657, she was immediately imprisoned. Dyer was then banished for both her Quaker beliefs and her attempts to spread her beliefs to others.

Dyer defied the banishment order. She returned to Boston with the intention of spreading her religion. She was again banished, and threatened with execution if she returned. Dyer broke the banishment order a third time. She traveled to Boston in October of 1659 where she was immediately sentenced to death. However, on the date of her execution, she was pulled from the gallows and given a reprieve. She left Boston, but returned again in the spring of 1660. She was again sentenced to execution, and this time, did not receive a reprieve.

On the day of her execution, Mary was given a chance to recant her beliefs and escape execution. She stated, “Nay, I cannot; for in obedience to the will of the Lord God I came, and in his will I abide faithful to the death.”

Quaker sculptor Sylvia Shaw Judson created the bronze statue of Mary Dyer seen above. The statue stands in front of the Massachusetts State House, and was photographed by Peter Dyer in 1976.