Elizabeth Amberman was born around 1910-1915 and lived most of her life in Jamaica Plain. Jamaica Plain was originally part of Roxbury and West Roxbury, but was incorporated into the City of Boston. Jamaica Plain, or “JP” as the locals call it, is surrounded by the Emerald Necklace, Arnold Arboretum, Franklin Park and Jamaica Pond.

Elizabeth reflects on the popularity of Betty Crocker’s angel cake, what she calls a revolution in baking. According to her, all the angel cakes prior to Betty Crockers were like rubber, making the new variety soar in popularity. She believed the White House Bakery was the first in the area to start selling it.

Elizabeth began her discussion of Betty Crocker’s angel cake in reference to a time that the payroll was robbed at the White House Bakery.

This influx of workers made it appear that the White House Bakery had a lot of cash on hand, and payroll was on Saturday. Elizabeth recalls the robbery of the bakery, where it was “held up.” She recalls how the headlines and how the newspapers covered it.

The robbery occurred in November, so the fund for their Christmas party was fairly substantial before the theft. However, Elizabeth claims the insurance company would not pay back these funds and the woman in charge of organizing had to pay it herself.

Elizabeth worked in payroll, but she was luckily not present for the actual robbery. The other women who were working were Elizabeth’s friends. One of her friends saw one of the robbers on a bus, but nothing came of it because there was not a policeman nearby. 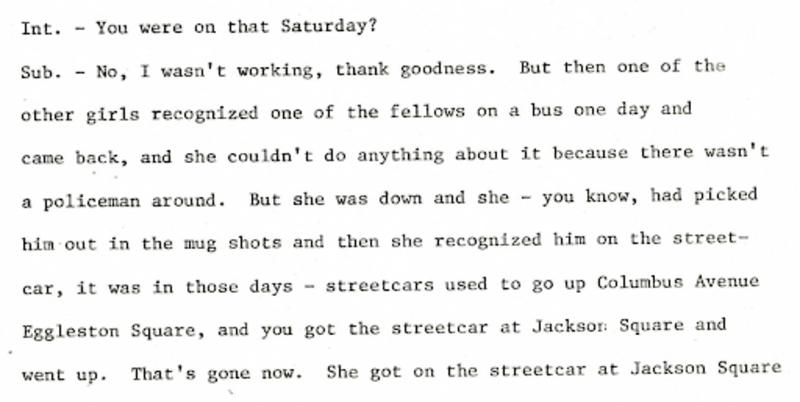 The frequency of robberies during the Great Depression was so different than the way it was in the 1970s when Elizabeth was interviewed. She claims that in those days, robberies were not even daily occurrences — more like hourly! 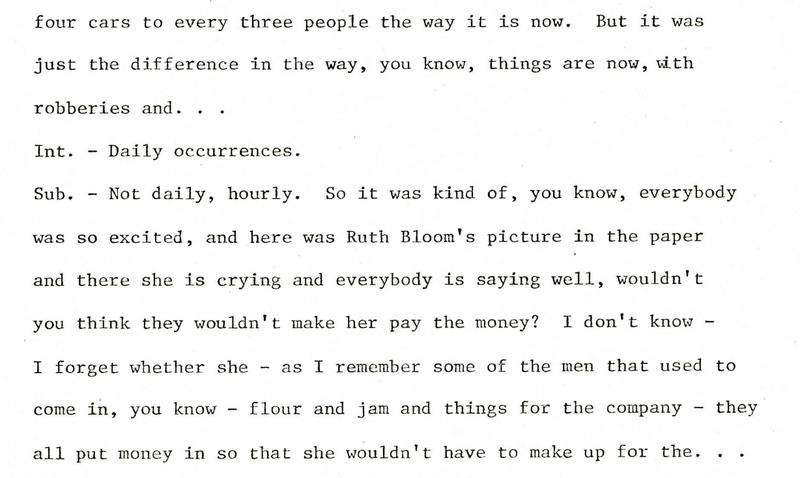 Ruth Bloom was the name of the woman Elizabeth said had been organizing the funds for the Christmas party. She remembers people coming in to donate to her, so she wouldn’t have to pay it back all by herself. Elizabeth emphasized how generous this was during the height of the Depression, when everyone was short on money. Elizabeth was supporting her entire family, making only $20 a week!

The Depression was a hard time, but Elizabeth remembered the White House Bakery with a fondness. The Bakery survived robberies and the depression, but went out of business shortly after the end of World War II.

Her time at the White House Bakery is just one topic of discussion in Elizabeth’s fascinating oral history interview. Read it here!