Voices of Boston: In the wake of WWII, Morna Crawford moves to Fenway

Morna Crawford came to Boston after World War II to take a job at the Museum of Fine Arts. She reflects on how Fenway has changed since her arrival more than 30 years prior.

Morna Crawford was born around 1910, and moved to Boston in either 1946 or 1947. She settled in the Fenway neighborhood of Boston. Fenway is a neighborhood in downtown Boston, named after The Fenway. It is also the location of the Back Bay Fens, or the Fens, and the Boston Red Sox’s iconic Fenway Park. She came to Boston shortly after the end of World War Two. Morna’s career was in museum work, and she remembers coming home after the end of the war.

Morna Crawford arrived home to New York, but did not stay there long. She came to Boston shortly after the war's end to work for the Museum of Fine Arts. The Museum of Fine Arts (MFA) was founded in 1870, and moved to its current location in Fenway in 1909. The MFA features one of the most comprehensive collections of art in North and South America. 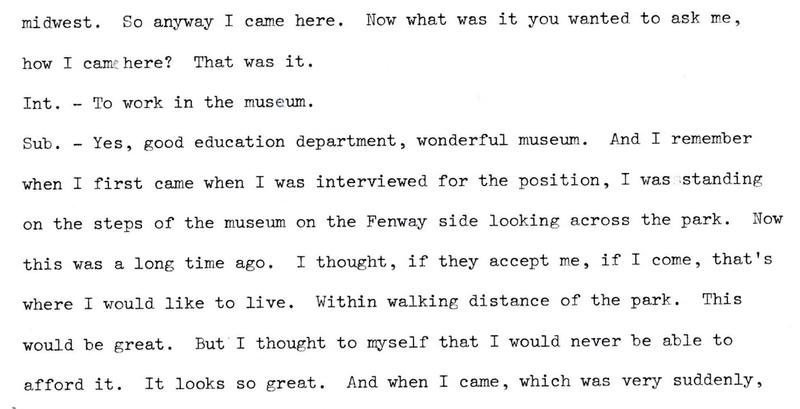 She decided to make the move from New York to Boston because she was unhappy with her job at Dealer’s in New York City. Morna’s decision to come to Boston came very suddenly, as did her move. She reflects on how quickly she was expected to start the job.

Morna had no issues finding her apartment in a day. She highlights how different renting in the Fenway area was back then, pointing to her low rent. She recalls only paying $75 a month to live in a nice apartment in Fenway.

When Morna first came to the Fenway area, she remembers how there were no children and it was as she described “a depressing place.” For her, she noticed big changes come about when students from the nearby colleges and universities began moving into the neighborhood

.Morna remembers how students were not permitted to live outside of the campuses, in dormitories. She recalls when the students of Radcliffe College began asking for the permission to live outside of the school. Radcliffe College, now incorporated into Harvard University, was an all women’s liberal arts college. It functioned as the female coordinate institute for Harvard University.

Morna claims that the colleges and universities were resistant to their students living outside of the school because it was bad for economic reasons. But as the schools grew in size, particularly Boston University (BU) and Northeastern University, more and more students began living in Fenway.

Morna identifies the growing student population as the cause of the biggest changes to the Fenway area. She discusses how both BU and Northeastern began buying more property in the Fenway area as they expanded.

When asked whether landlords were hesitant to rent to students, she emphasized the economic benefit to landlords of renting to students. She recalls how students in that time were packed into small apartments, such as her own.

Interestingly, the influx of students to the area caused rents to increase. Morna emphasizes how she would not want to live anywhere else but Fenway, in part because it is so close to her job at the MFA. She reflects on how the increasing university presence brought with it a more racially diverse neighborhood; another aspect of Fenway she really values.

Morna did not initially like living in Fenway, before the students and families began moving in. She emphasizes how much the area has changed, and how it grew into a more friendly neighborhood. For her, the changes have overall been for the better. 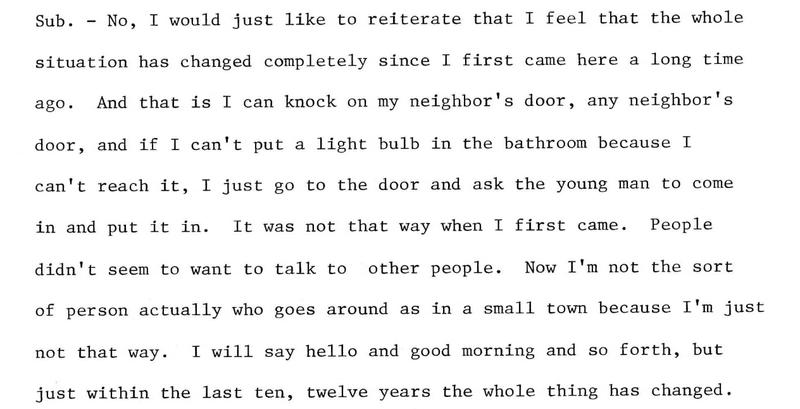 To read more about Morna’s reflections on the role of cultural and educational institutions in Fenway, read her 34-page oral interview!