The galleries at Boston City Hall promote and exhibit the work of Boston artists only.

You can find information about the galleries, as well as what's currently showing, on this page.

Want to exhibit your Artwork in City Hall? The galleries at Boston City Hall promote and exhibit the work of Boston artists.

The Haitian Artists Assembly of Massachusetts is a volunteer group of Haitian artists in different domains ⁠— visual arts, writers, performers ⁠— created in 1995 in New England. It promotes Haitian arts and culture, facilitates fellowship among artists, and collaborates with other like-minded organizations. The exhibit commemorates the tenth anniversary of the Haiti earthquake, and is presented in collaboration with the U.S. Haitian Chamber of Commerce, Haitian Mental Health Network, Brockton Arts, and the Haitian Americans United Inc.

Robyn E. Thompson-Duong is a contemporary realist painter and teacher who works mostly in acrylics. Robyn studied visual art at Syracuse University, earning a BFA in 2002. She later went on to earn an MEd from Lesley University. Combining her passion for art with her love of teaching, Robyn has been an art teacher in both private and public schools. Robyn is a lover of nature and all things magical, which is represented in her figurative paintings including mysterious landscapes and magical realism.

The paintings of "Black Tie" represent a time in our nation’s history when African-Americans, by social norms, were forced to socialize among themselves.  Denied access to white institutions, they formed their own social clubs, fraternities, and sororities that still function in modern times.  Much like their white counterparts, they developed their own rules for inclusion and exclusion.  The "Black Tie" paintings represent one such group who peer from the canvas with a questioning eye.  They seem to be asking, “Who are you?” and more importantly, “Do you belong at my party?”  Indeed the paintings are incomplete without a viewer in front of them, engaging in a dialogue with its elegant characters.  The paintings highlight the beauty of a people who have not been formally represented in American art. The heavy use of black and white paint within the painting is a metaphor for being black in white America and the tension that these seemingly dichotomous races have created between themselves.

Design Museum Foundation's newest exhibition, "We Design: People. Practice. Progress.", is a multimedia exhibition celebrating a variety of creative professionals — of differing ages, genders, backgrounds, races, ethnicities, sexual orientations, and abilities. The exhibit showcases their unique career paths through stories and photos, along with examples of their work throughout their careers including design process imagery and artifacts. The exhibition also explores the need for more diversity in the design and innovation industries through quantitative and qualitative data visualizations and case studies.

The Mayor's Poetry Program is an annual program in which Boston residents are invited to submit poems to be displayed throughout City Hall for one year. This year's theme was "Home", and 19 poems were selected by City of Boston Poet Laureate Porsha Olayiwola.

Aged Air: a found Poem – Melissa “City” Saunders
Home is Where You Know Where Everything is in the Grocery Store -
Patrick Casey

The Salt and Pepper Bridge – Margaret A. Lowe

inside a salem parlor – Jake Trangali

In honor of Boston City Hall’s 50th anniversary, we are looking for out-of-the-box ideas to reimagine City Hall. 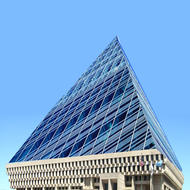 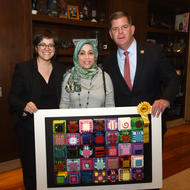 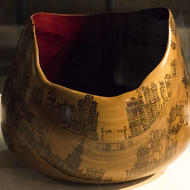 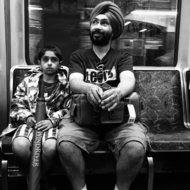 The Mayor's Gallery exhibits work by Boston artists who have received recognition for their artwork through grants, awards and other types of public display.

Directions: It's located on the 5th floor of City Hall. From City Hall Plaza or Congress St. entrances, take South Elevators to the 5th floor, follow signs to Mayor's Office: signage marks the gallery entrance. If you are planning to attend an opening you must enter from Congress Street.

The Scollay Square Gallery showcases the many arts organizations and artists community groups that support Boston artists throughout the City.