Through Community PlanIt, an online game becomes part of a community discussion.

The goal of the platform is to create a bigger and more engaged audience for community talks. We also want to create greater empathy and understanding among participants. The Engagement Lab at Emerson College first designed this community planning approach with Boston Public Schools in 2011.

Why we did this

Boston Public Schools wanted input on how to figure out the relative quality of its schools. In the past, they used traditional outreach methods, like surveys and community meetings. But, these methods hadn’t always engaged the broadest audience, or led to the best feedback.

For years, Emerson’s Engagement Game Lab had tested the use of games to build better civic engagement. This includes the previous Hub2 project. Another one of their projects was a platform called Community PlanIt.

Our hypothesis? A non-traditional approach to community input will bring in more people and give us better feedback. Those involved will also work together to find solutions.

Community PlanIt is a game that makes planning playful. It includes online interaction and in-person meetings. Participants engage in a series of talks with fellow players, earning credit for their level of participation. Those points can then be spent on advocating for the ideas they think are most important.

From September 15, 2011, until October 20, 2011, we gave participants seven “missions.” These missions asked for feedback on how the City was measuring schools and students. These players:

After the online phase, participants gathered at a Town Hall meeting to meet in person. They continued the talks started online and role-played in small groups. This experience allowed them to build a shared understanding of the City’s challenges. They were also able to hear different ideas, and offer input to school administrators. 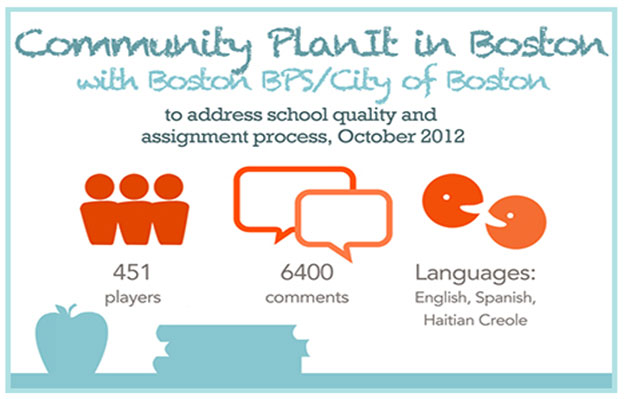 The mix of people who took part reflected the school community more than typical public forums. Many found that hearing different ideas led to greater empathy and mutual respect.

Those who took part were skeptical that their input would make a long-term impact. As a pilot project, the Community PlanIt sessions lacked the institutional commitment to make that happen.

Other cities embrace the forum

Community PlanIt has since been used in Detroit and Philadelphia, among other cities. If used again in Boston, we would make it a bigger part of the decision making process. In the future, we want to make sure input leads to action.