The galleries at Boston City Hall promote and exhibit the work of Boston area artists.

You can find information about the galleries, as well as what's currently showing, on this page. 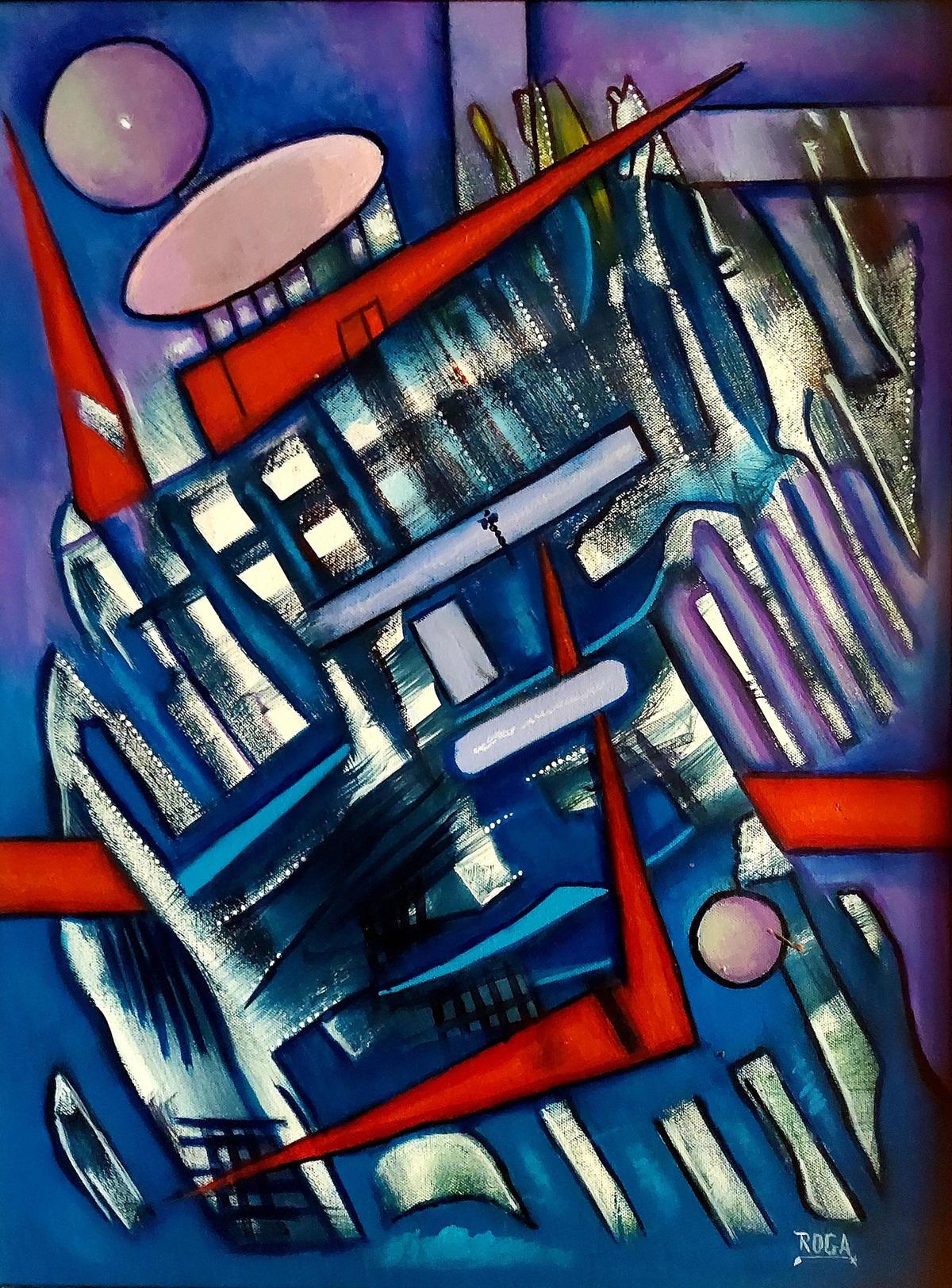 This year’s 2023 Haitian Artists Assembly of Massachusetts (HAAM) art exhibition features the beautiful artworks of Hatian artists highlighting the richness, creativity, culture, and history of their native land, as they negotiate their existence as immigrants living abroad.

This year's exhibition, Color of Resilience, also embraces themes beyond New England as HAAM is supporting young artists from three different towns of Haiti in Limonade, La Gonâve and Île-à-Vache to ensure that they preserve the originality and the value of their culture and connect with their diaspora counterparts.

The public is invited to partake in this resilient, artistic tradition that has been taking place at Boston City Hall since the devastating Haiti earthquake of 2010, thanks to a partnership between the Mayor’s Office, HAAM, and its partners.

Rhythm is the core of the art, as what we know. Branches of the tree are always staggered, especially the elder tree. The vine is the same. They are interlaced with each other, to make a relationship, to kiss, to rely. The branch is small and big, short and long, curved and straight, inside and outside, on the top or under, they are covered by the sun, by the rain, then they have shadows, show up different colors. Those are creating so much rhythms, so much lovely rhythms. The mother nature is so poetic. As a artist, I love that situation. That’s the reason I made up this show. Show up how we can get back to the nature.

Mr. Mei is the founder of The Chinese American Fine Arts Society which has been in Chinatown for 25 years. He has also been its president for over 20 years as well. This nonprofit organization has done so much for the community including middle fall festival, Chinese New Year, etc.

He has presented more than 25 solo shows including at Harvard University, New York, Chicago, and Beijing, among other cities. His artworks “Dragon”, “The Blue Waves are Ripping”, “Quiet to See All”, and others are in the collections of the Worcester Art Museum and Peabody Essex Museum. Mr. Mei has delivered courses and lectures at the Museum of Fine Art, Boston, Harvard, Wellesley, MIT, and other universities throughout New England. His publications include calendars and books of calligraphy and poems.

To celebrate the Millennium 2000, Boston Mayor Raymond Flynn invited Mr. Mei to write a tablet of calligraphy to be displayed at the gateway of Chinatown and a big public work consisting of 2000 different styles of the Chinese character for “longevity” in the Garden of China. 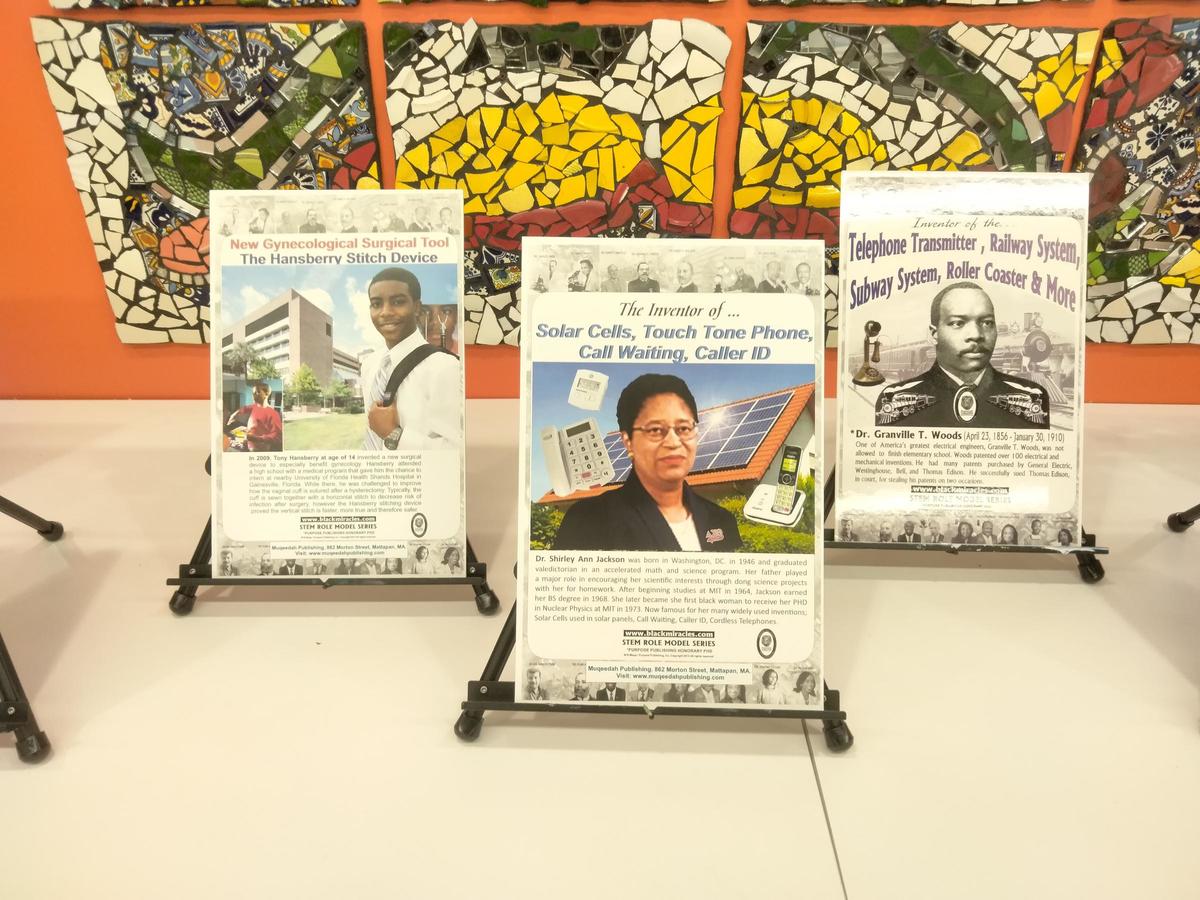 Vanessa Leroy (b. 1996) is a freelance photographer and photo editor based in Boston. She holds a BFA in Photography from Massachusetts College of Art and Design. She remains on the hunt for new ways of seeing, remembering, and altering the world through photography. She is drawn to image-making because of the power it holds to create nuanced representations for marginalized people and uplift their stories. She sees photography as a tool for social justice, and with it, she hopes to create worlds that people feel as though they can enter and draw from, as well as provide a look into an experience that they may not personally recognize. Her photojournalism work has been featured in The New York Times, The Washington Post, The Wall Street Journal, NPR, STAT News, Bloomberg, The Guardian, HuffPost and exhibited at Vermont Center for Photography and Gallery Kayafas in Boston, MA — where she is represented.

Within this book of cloth cyanotypes, I’ve created a dreamlike map of my experience of black girlhood, and these pages serve as a bridge to my present experience. You’ll find journal entries from the 5th grade, family scrapbook photographs, passing thoughts, music lyrics, and images I’ve taken between 2014 and 2019. I wanted to re-contextualize these artifacts by exposing them to light, creating diptychs, inserting text and illustrations, and binding the timeline with thread.

The Mayor's Poetry Program is an annual program in which Boston residents are invited to submit poems to be displayed throughout City Hall and in an online gallery for one year. Our Poet Laureate Porsha Olayiwola selected 15 poems in 2022.

Artist Sophia Ainslie brightened up the eighth floor of City Hall with a new mural this past summer. As an extension of her project, she documented the reactions of City employees who walked by, and took photos of them with the mural. 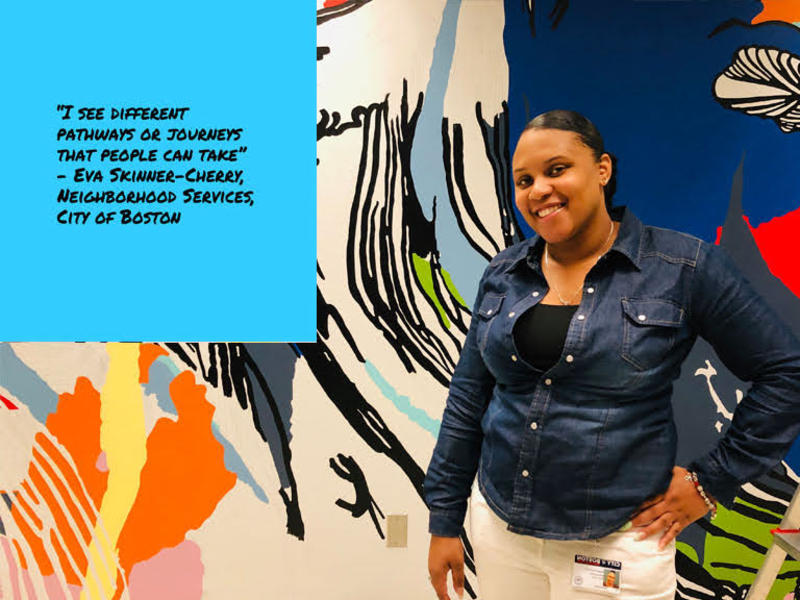 The Mayor's Gallery exhibits work by Boston area artists who have received recognition for their artwork through grants, awards and other types of public display.

Directions: It's located on the 5th floor of City Hall. From City Hall Plaza or Congress St. entrances, take South Elevators to the 5th floor, follow signs to Mayor's Office: signage marks the gallery entrance. If you are planning to attend an opening you must enter from Congress Street.

The Scollay Square Gallery showcases the many arts organizations and artists community groups that support local artists throughout the City.

This is the newest of City Hall's galleries. It showcases Boston's up and coming artists.

Directions: It is located on the 8th floor of City Hall. When entering from Congress Street or Cambridge Street, take the elevators to the 8th floor. The gallery is in the hallway to the left of Room 801, which is perpendicular to the elevators.

Re-imagine City Hall
In honor of Boston City Hall’s 50th anniversary in February 2019, we sent out a call artists to reimagine and redesign the exterior of City Hall.
National Arts Program 2018
As part of this program, City of Boston employees and immediate family members were invited to display their art.
'Alone Together: Photos' by Jerry Russo
An examination of people while confined to the crowded spaces of the MBTA.
Boston Public Schools Youth Arts Month Festival
Each year we showcase the work of young Boston Public Schools artists from across the district.
'The Art of Science'
"The Art of Science" featured artists who work in new media, including Michael Moss and Claudia Ravaschiere's piece "Precious", an interactive mixed-media sound installation.
'A Summer Proposal'
Paul C. Ha invited eight Boston and Cambridge-based artists to create work for Boston City Hall, keeping in mind the building's architecture.