In 2017, the Boston community emitted 6.1 million metric tons of greenhouse gases (GHGs). Emissions came from energy use in buildings and other facilities, and from transportation. This is an almost 4% decrease from 2016, when Boston emitted 6.4 million metric tons according to revised estimates. Overall, Boston’s 2017 emissions represent a 21% decrease from 2005. This reduction has occurred at the same time that the population and the number of jobs in Boston have increased. The decrease is in large part due to a cleaner electric grid and fuel switching from fuel oil to natural gas. 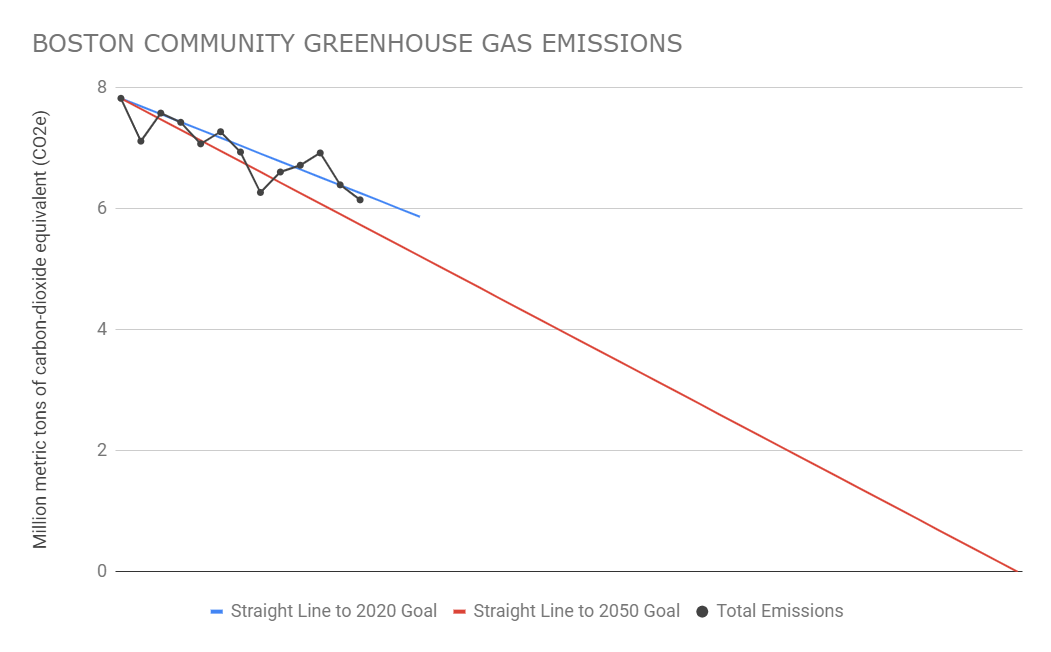 Boston Local Government Operations emitted 116 thousand metric tons of GHGs. This is a 41% reduction from 2005 including renewable energy credits (RECs), and a 33% reduction without RECs. We met our municipal 2020 goal of reducing GHG emissions 25% below 2005 levels in 2015.

Read through the inventory report and methodology.

The reduction in Boston’s emissions has occurred at the same time that the population and the number of jobs in Boston have increased. Since 2005, the Boston community has grown from 520 thousand to more than 680 thousand residents in 2017. Boston’s economic growth, as measured by Gross City Product (GCP), has increased from 91 billion to 129 billion dollars. Meanwhile, emissions per Boston resident decreased 40%, from 15.0 to 9.0 metric tons per year. And emissions per million dollars of GCP decreased 45%, from 86 to 48 metric tons per million dollars. 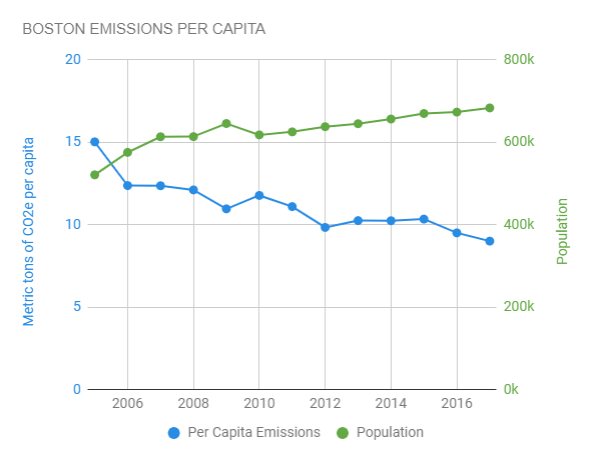 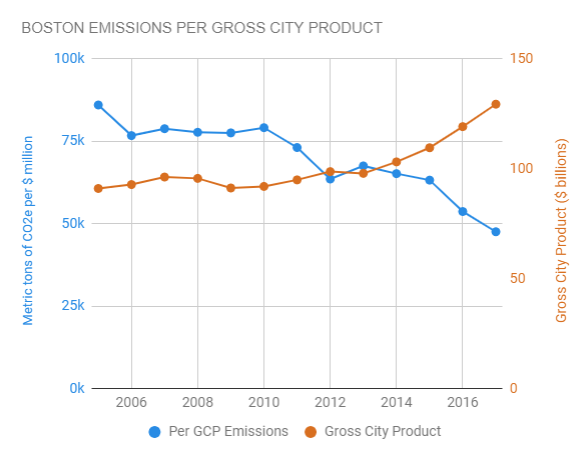 In his 2017 State of the City address, Mayor Martin J. Walsh announced the City’s goal of carbon neutrality by 2050. This commitment underlies the City’s Climate Action Plan, soon to undergo its third update. To measure progress, Boston follows the Global Protocol for Community-Scale Greenhouse Gas Emission Inventories (GPC). The baseline year is 2005, the first year in which consistent and reliable data was collected. Boston has an interim goal to reduce citywide emissions by 25% by 2020.

The annual greenhouse gas inventory is based on a combination of direct data and estimates for data that cannot be obtained directly. Data sources include City records, utility company reports, and information from state and federal agencies. Reporting is separated into community-wide and local government operations inventories. Because the data for these inventories is collected using separate protocols on separate timescales, the Local Government Operations Inventory should be considered to be overlapping, but not completely contained within the Community Inventory.

The goal of the community inventory is to include GHG emissions associated with all activities — residential, commercial/industrial, institutional, transportation-related — within the administrative boundary of the City of Boston. The Boston community-wide inventory accounts for emissions from the following sources: 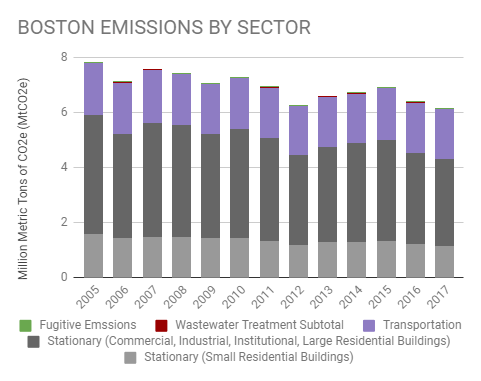 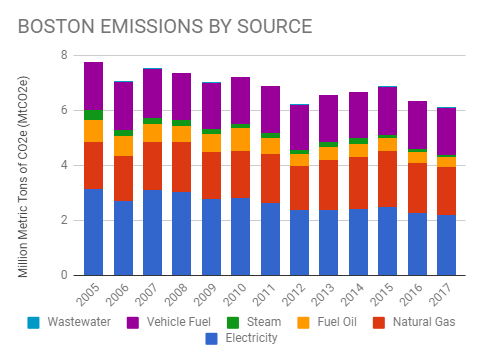 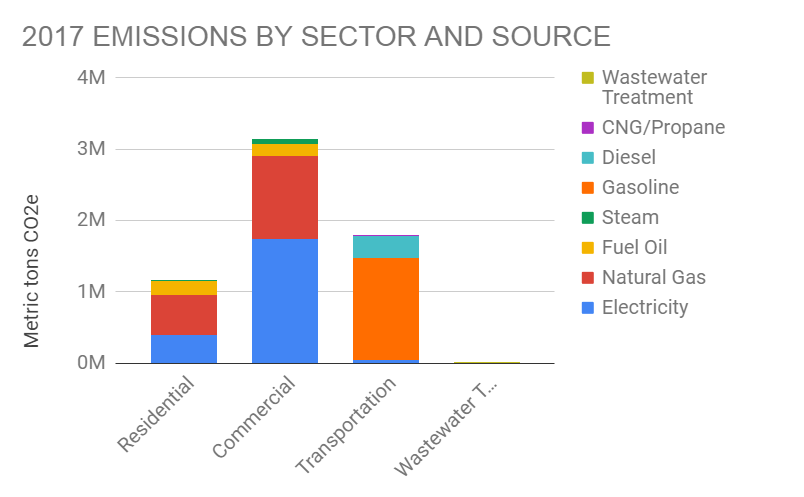 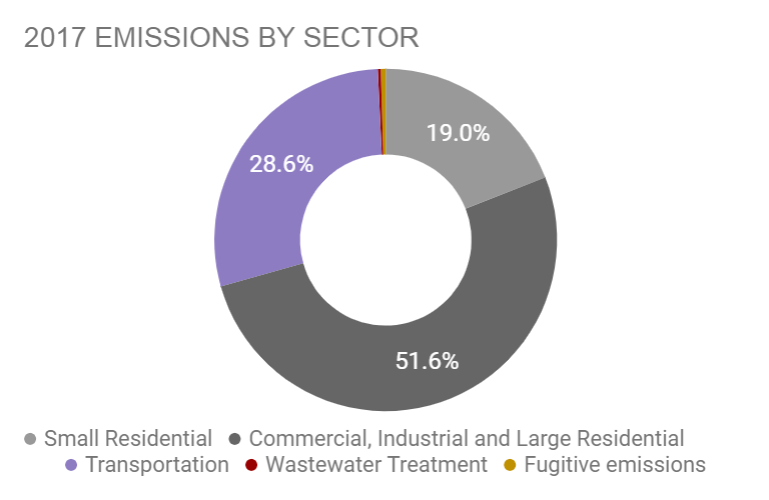 In Boston, energy use in stationary sources dominates, accounting for 70% of total emissions (4.3 MtCO2e). Commercial, industrial, and large residential buildings generated 51% of total emissions (3.1 MtCO2e), while small residential buildings accounted for 19% of emissions (1.2 MtCO2e). Fugitive gas emissions for all sectors account for less than 1% (29 thousand tCO2e) of emissions. Emissions in the building sector stem from the use of electricity (50%), natural gas (40%), fuel oil (8%), and steam (2%).

Individual buildings over 35,000 square feet publicly report their energy and water usage annually. The data is available at: BERDO

Emissions from transportation comprise 29% of the inventory (1.8 MtCO2e). This is lower than transportation’s share of statewide or national emissions because of Boston’s density and robust public transportation system. More than half of Bostonians get to work via a mode other than a car (Go Boston 2030).

The inventory captures the emissions from the estimated Vehicle Miles Traveled (VMT) inside the City, plus public transportation vehicles and off-road vehicles used at the airport and wastewater treatment plant. Primary sources of energy in transportation include gasoline (76%), diesel (20%), natural gas (2%), electricity (2%), biodiesel and propane combined (<1%).

GHGs reported in the waste sector refer to emissions from wastewater treatment only and account for less than 1% of total emissions (17 thousand tCO2e). All, or almost all, of Boston’s solid waste is sent to Waste To Energy (WTE) incineration plants that feed the electricity grid, so emissions are counted as part of regional electricity generation. Boston has a Zero Waste initiative and the indirect accounting of emissions from solid waste in our GHG inventory does not affect the City’s commitment to waste reduction.

The Carbon Free Boston analysis estimated that Boston’s waste sector accounted 393 thousand tons of direct carbon emissions in 2017, if the WTE emissions are broken out from the electricity emissions factor. The Zero Waste Boston initiative has issued strategies to reduce, reuse, recycle and compost at least 80 to 90 percent of Boston’s solid waste. The Carbon Free Boston analysis determined that a 90 percent diversion rate would reduce waste emissions by 78% relative to 2017 emissions, including the WTE emissions. 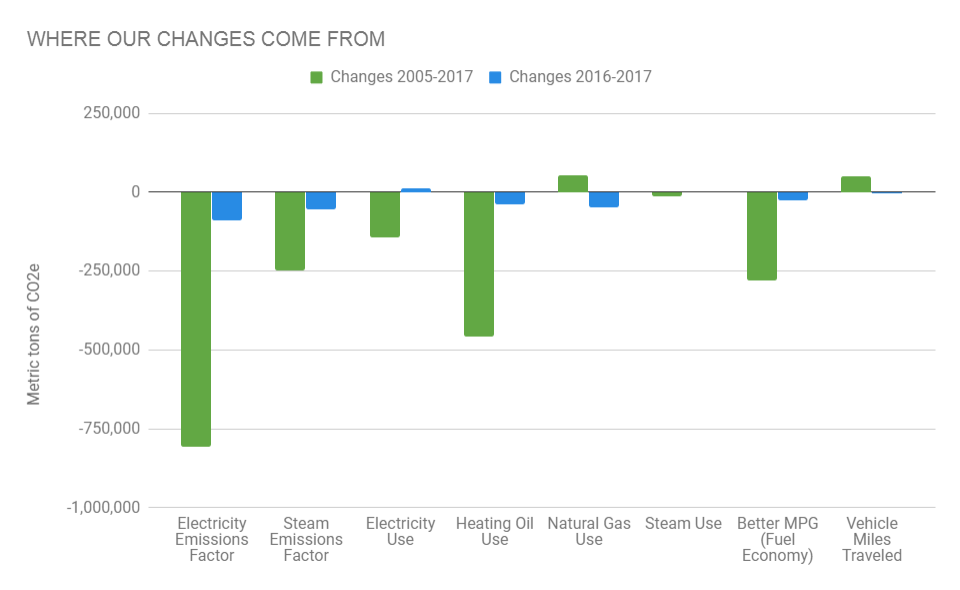 In 2017, the community’s GHG emissions decreased 4% (248 thousand tCO2e) from the previous year. These decreases reflect that:

Boston’s GHG emissions from 2005 to 2017 have declined by more than 21%. 44% of GHG reductions are the result of state-level and regional action to clean the New England electric grid. As a result, the electricity emissions factor has improved continuously over time, as electricity has been less carbon-intensive. Another 25% of GHG reductions may be attributed to reduced fuel oil use. This is because many households and businesses are switching from fuel oil to natural gas to heat their homes. Steam has become cleaner thanks to fuel-switching from oil to natural gas and the addition of the Kendall cogeneration plant in 2014. The average fuel economy of vehicles registered in Boston has also improved from 19.8 miles per gallon (mpg) in 2009 to 21.2 mpg in 2014 (most recent year for which Boston-specific data is available). 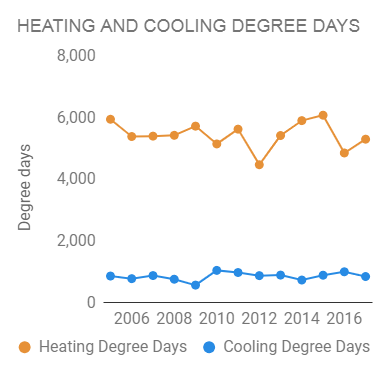 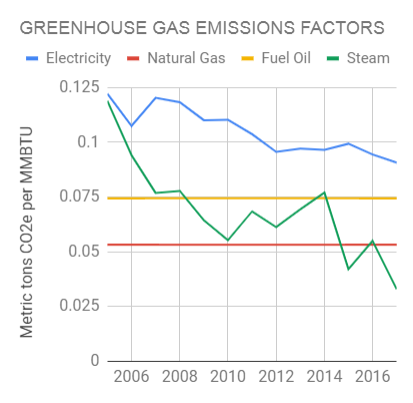 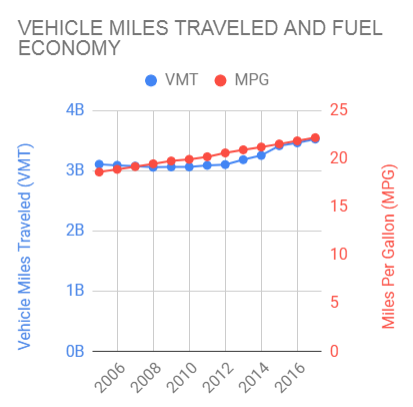 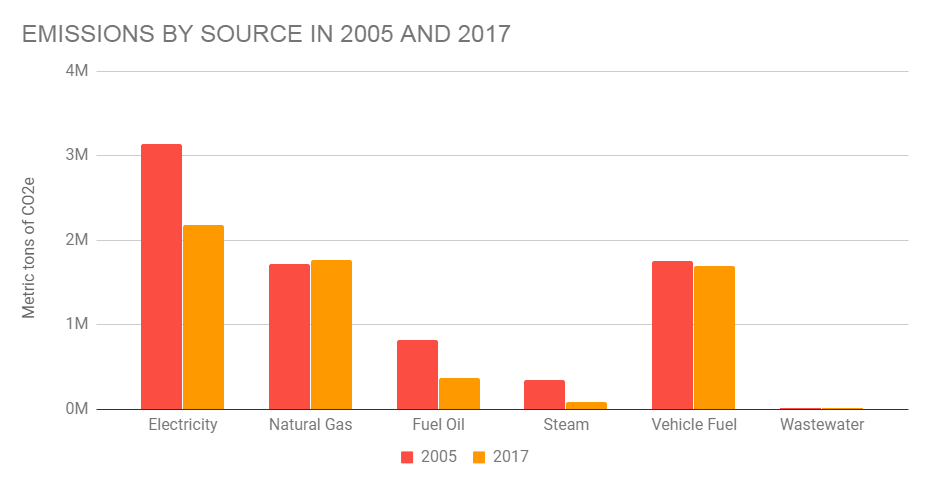 The inventory employs measured data, projections, models, and, where data is scarce, best estimates. All of these sources have some level of uncertainty, most of which have not been quantified. Furthermore, the inventory is frequently revised as new and better data become available, models are improved, new methodology is developed, and international standards evolve. For these reasons, longer term trends are likely more reliable than absolute numbers or year-to-year changes.

The Local Government Operations (LGO) inventory calculates all greenhouse gas emissions generated by municipal operations in the City of Boston. This includes the burning of fuels in the City’s facilities, vehicles, and other equipment, and the energy used in municipal buildings, vehicles, parks, street lights, and traffic signals. The LGO inventory is based on the ICLEI greenhouse gas reporting protocol for local government operations.

While the timeframe for the citywide inventory is the calendar year, the LGO inventory is conducted on the fiscal year, from July to June. Because the data for these inventories is collected using separate protocols and on different timescales, the LGO should be considered to be largely overlapping but not completely contained within the Citywide inventory.

FY17 municipal emissions are down more than 33% from FY05, before including adjustments for the purchase of renewable energy credits. Adjusting for the City of Boston’s purchases of Green-E Certified Renewable Energy Certificates (RECs) equal to approximately one fourth of our total electricity consumption, emissions in FY17 are down nearly 41% from FY05 levels. This means the City of Boston met our municipal 2020 goal of a 25% reduction, five years ahead of schedule. 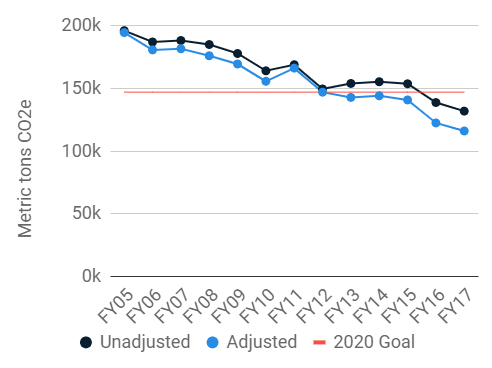 Similar to the community-wide inventory, Boston’s municipal operations GHG inventory trends are driven by a number of external and internal factors. Diesel consumption is continuing to decrease as Boston Public Schools switches its fleets from diesel- to propane-powered school buses. The continued downward trend in the regional electric grid emissions rate also contributed to reduced emissions. 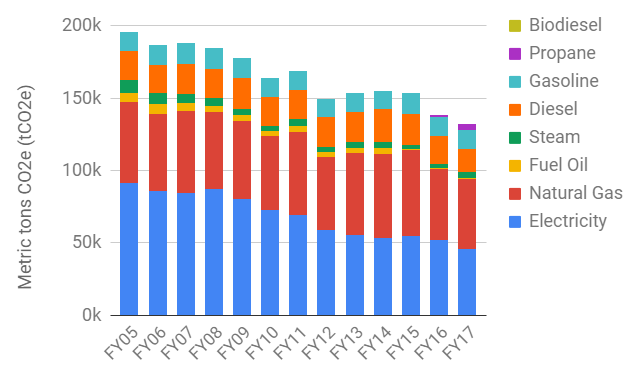 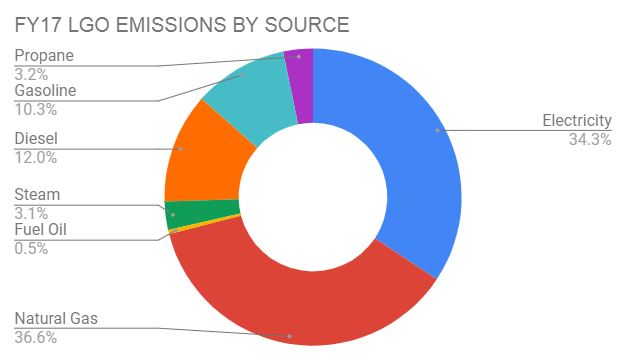 As the department with the largest building portfolio, and the second largest vehicle inventory (after Boston Police Department), Boston Public Schools represent the largest source of municipal emissions. BPS owns and operates approximately 12 million of the City’s 16 million square feet of building space across the roughly 127 school buildings in the district. These buildings represent one third of municipal electricity consumption and two thirds of municipal gas consumption.

The BPS Department of Transportation (DOT) fleet of over 700 vehicles uses nearly two thirds of all the diesel fuel consumed by City government. BPS has continued their replacement of the oldest, dirtiest diesel buses to lower emissions propane engines, which now comprise over one quarter of the fleet. Since BPS-DOT is on a roughly 10-year replacement cycle, these lower emissions vehicles will provide emissions reductions over the next decade. 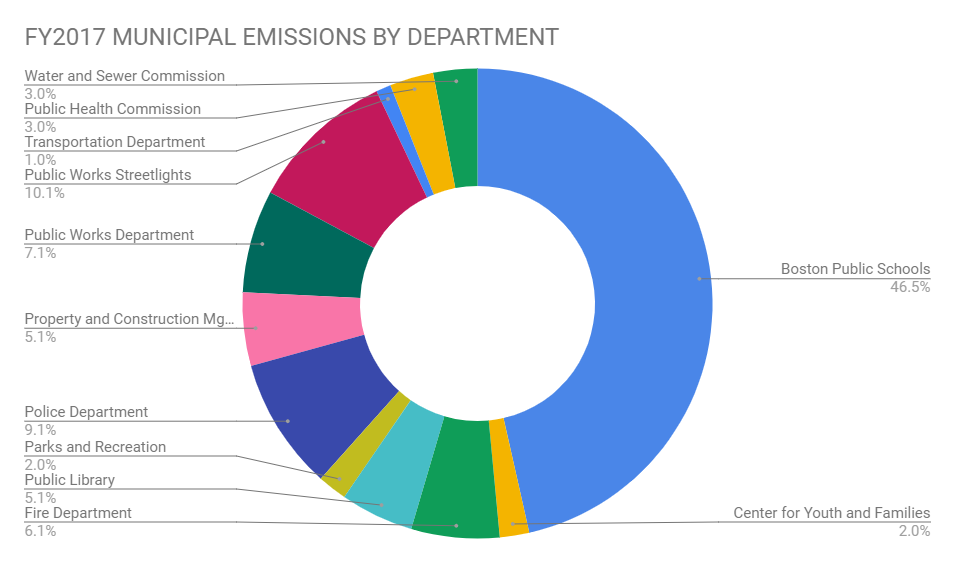 In 2015, Mayor Walsh signed on to what is now known as the Global Covenant of Mayors (GCoM), which required the City to follow the Global Protocol for Community-Scale Greenhouse Gas Emission Inventories (GPC). ICLEI Local Governments for Sustainability, whose guidance the City already followed, was a co-developer of the GPC, so the differences were not major. The two main changes were in the categories in which the data is collated, and in two new categories of emissions collected. The GPC requires the ethanol content of gasoline to be reported as a separate biogenic source of emissions, and for an accounting of fugitive gas emissions from the natural gas supply system.

Boston’s GHG inventories are reported in CO2 equivalents (or CO2e) which is a universal unit of measurement that accounts for the global warming potential (GWP) of different greenhouse gases. Boston’s GHG inventory includes carbon dioxide (CO2), methane (CH4), and nitrous oxide (N2O), and uses Global Warming Potentials (GWPs) from the latest version of the International Panel on Climate Change (IPCC) Guidelines (currently 5AR). The formula used to determine the CO2e from a given energy use is Activity Data x Emissions Factor1+2+3 = GHG Emissions from the activity.

Our full methodology may be found in “Boston Greenhouse Gas Inventory Methodology,” most recently updated for the 2016 inventory year.

The Local Government Operations inventory methodology for calculating GHG emissions is based on the ICLEI greenhouse gas reporting protocol for local government operations, developed by ICLEI and the National Association of Clean Air Agencies. The protocol categorizes emissions as direct (Scope 1) or indirect (Scope 2). Direct emissions come from the burning of natural gas, fuel oil, gasoline, diesel fuel, and other fuels in the City’s facilities, vehicles, and other equipment. Indirect emissions come from the burning of fuels in facilities owned and operated by others to produce electricity, and steam that the City uses. Emissions that are not under the operational control of the City government, or involve leased properties, are excluded. Emissions from the Boston Housing Authority, the Massachusetts Water Resources Authority (MWRA), and the Boston Planning and Development Agency (BPDA) are not included in the inventory. Those from the Boston Public Health Commission (BPHC), and the Boston Water and Sewer Commission (BWSC) are.

In 2013, the City invested in an Enterprise Energy Management System (EEMS) and an Energy Manager to track and report local government energy consumption, cost, and GHG emissions. Prior years’ reporting relied on annual data collection from numerous stakeholders in the auditing, budget, and purchasing offices. This manual process sometimes led to inconsistent data collection from year to year. Now the process is almost entirely automated, and with complete invoice data for over seven calendar years entered, the City can track progress towards energy and GHG reduction goals on a monthly basis. By tracking this data more closely, the City is able to identify which departments, buildings or assets are contributing most to our overall portfolio, and in the process, has identified errors in utility bills worth over $1.2 million in credits back to the City.

One notable correction in accounting methodology was a double-count identified in fleet fuels. When the City began reporting vehicle fuels based on delivery point in FY15, it did not account for the fact that Boston Public Health Commission (BPHC), and Emergency Medical Services (EMS) fueled their vehicles at Department of Public Works (DPW) and Boston Fire Department (BFD) fueling stations. Fueling reports from BPHC and EMS were counted separately, even though said fuel use was already included in the DPW and BFD. This correction results in an approximately 141,000 gallon reduction between diesel and gasoline for the FY15 inventory. The correction is included in the new FY16 inventory, and all years FY05-FY14 are not affected by this correction.