David Leonard, President of the Boston Public Library, leads the 170-year old institution, one of Boston’s great educational, cultural and civic treasures. David began working at the BPL in 2009, bringing a wealth of experience from the technology, management and consulting fields. Appointed president by the Library’s Board of Trustees and former Mayor Martin J. Walsh in June 2016, David’s focus is on developing the BPL as a twenty first century institution providing dynamic library experiences to the residents of Boston, of Massachusetts and beyond.

Boston Public Library has a Central Library in Copley Square, 25 neighborhood branches, an archival center, and also serves as the "Library for the Commonwealth" of Massachusetts. In his role David oversees a collection of more than 23 million books, maps, manuscripts, prints, and an expanding digital collection.

Prior to his appointment as President, David served as Interim President for one year. During that time he focused on the completion of the $78 million renovation of the Central Library in Copley Square, which opened in July 2016, as well as a significant number of branch and collections management improvement projects, enhancing access and the customer experience; collaborating with city departments and with local cultural institutions; and supporting the Mayor’s arts and culture vision.

During his time at the Boston Public Library David has also served as Director of Administration & Technology, acting Director of Administration & Finance, acting Chief Financial Officer, and Chief Technology Officer. He led the Library’s capital improvement project for the Norman B. Leventhal Map Center, worked to modernize the library’s technology infrastructure - including the migration to the new Integrated Library System, and deployment of new Pay-for-Print Systems system wide - and oversaw master planning and design for the renovation of the Central Library in Copley Square.

David initially pursued an academic career, transitioned to the non-profit sector, and then spent ten years in the private IT consulting world in roles that spanned business development, management, and technology consulting, working on both strategic and tactical projects and services. David is currently enrolled in a PhD program in Library Information Science at Simmons College. He holds a Bachelor’s Degree in Philosophy and Mathematics and a Master’s Degree in Philosophy from the University College Dublin. 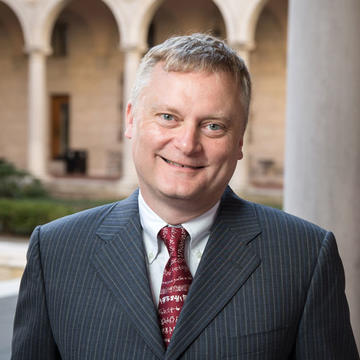