Michelle Wu is the Mayor of Boston. She is a daughter of immigrants, Boston Public Schools mom to two boys, MBTA commuter, and fierce believer that we can solve our deepest challenges through building community. As Mayor, Michelle is working in coalition to deliver bold, systemic change and make Boston a city for everyone.

Mayor Wu has been a voice for accessibility, transparency, and community engagement in city leadership. First elected to the Boston City Council in November 2013 at the age of 28, Wu is the first Asian-American woman to serve on the Council. In January 2016, she was elected President of the City Council by her colleagues in a unanimous vote, becoming the first woman of color to serve as Council President.

As a Councilor, Mayor Wu was the lead sponsor of Boston's Paid Parental Leave ordinance and Healthcare Equity ordinance prohibiting discrimination based on gender identity — both of which passed unanimously through the Council and were signed into law by former Mayor Martin J. Walsh. She also authored Boston’s Communications Access ordinance, which guarantees translation, interpretation and assistive technology for access to City services regardless of English language proficiency or communications disability.

Wu got her start in City Hall working for Mayor Thomas M. Menino as a Rappaport Fellow in Law and Public Policy, where she created the city’s first guide to the restaurant permitting process from start to finish, and was also a driving force to launch Boston’s food truck program. She later served as statewide Constituency Director in the U.S. Senate campaign of her former law professor, Elizabeth Warren.

As a former restaurant owner, legal services attorney, and legal guardian of her younger sister, Wu understands firsthand the barriers that families and communities face.  She has a background in community advocacy, having worked at the WilmerHale Legal Services Center in Jamaica Plain, providing legal advice to low-income small business owners, as well as at the Medical-Legal Partnership at Boston Medical Center on immigration law cases for survivors of domestic violence.

In 2016, Councilor Wu was honored as one of Ten Outstanding Young Leaders by the Greater Boston Chamber of Commerce and as part of Marie Claire magazine’s New Guard: The 50 Most Influential Women in America.

Mayor Wu graduated from Harvard College and Harvard Law School. She is fluent in Mandarin and Spanish, and lives in Roslindale with her husband Conor and her sons Blaise and Cass. 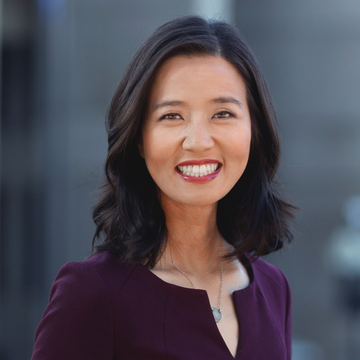