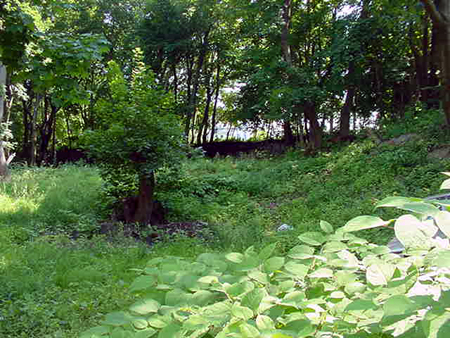 The Eldon Street I urban wild is located to the east of the Arnold Arboretum and is roughly bordered by Hazelmere Road, Weld Street, Robken Road, Selwyn Street, and the Eldon Street II Urban Wild. The area is generally surrounded by the backyards of abutters; however, several obscure entrance points do exist into the urban wild. In an area of low topography, the Eldon Street urban wild serves primarily as a catch basin for the area's stormwater and is thus dominated by a forested wetland habitat. The area has been overrun by non-native, invasive species, especially multi-flora rose and buckthorn. At one time, a boardwalk permitted entrance into the wetter sections of the wild from Eldon Street. However, the overwhelming presence of multi-flora rose now makes this entry impossible.

The Eldon Street II Urban Wild is located to the east and contiguous with Eldon Street I. The site is bordered by Walter Street, Selwyn Street, and Coniston Road. Like Eldon Street I, this area is surrounded by the backyards of abutters. However, two vacant lots do provide access into the urban wild. Although containing some higher topography than Eldon Street I, this urban wild still serves primarily as a catch basin for the area's stormwater, and is dominated by a forested wetland habitat.