Mu-Chieh Yun is a co-founder of We, Ceremony, a visual platform that uses storytelling to empower and celebrate the unique voices of women of color. As outlined in its mission statement, We, Ceremony is a network of women who “take pride in their lived experiences and are redefining what it means to be both a woman and a person of color.”

One half of We, Ceremony’s leadership, Yun immigrated to Boston from Taiwan at age 7. She headed to New York City for college and worked in fashion and art for a few years after earning her degree. When she eventually moved back to Boston, she didn’t know many people in the area she could relate to anymore – until she received a request to connect on LinkedIn from Iliana Panameño, a childhood friend from elementary school. Panameño had also recently moved back to Boston, and soon she and Yun renewed their friendship.

They valued the support and validation they found in one another immensely, and they realized there must be other women like them seeking similar kinship. And so, the concept for We, Ceremony was born. The name followed shortly thereafter – just two words they liked that, when paired, embodied the inclusive and celebratory spirit they sought, with a little intrigue to boot. Rooted in equal parts compassion and rebellion, the platform is both a space for community and a reaction to failings of our current media landscape. “There's just not enough representation of women of color in social media and the media in general, so we thought, alright, well, we have our cameras, and we think we're pretty friendly,” Yun recalls with a laugh. “Why don't we go to different neighborhoods in Boston, find women of color, and just talk to them?”

With an early focus on street style and self-expression through fashion, We, Ceremony quickly garnered a following online. “That was really affirming,” Yun remembers. “We saw that women of color did want a platform to talk about who they are in a positive way and to reclaim their own identities.”

We often hear that “representation matters,” but Yun and Panameño internalized that theory as a call to action. First, they focused on visual aesthetics, snapping portraits of women and uploading them to a dedicated Instagram account. Then they built a website to accommodate more written features. “We wanted to offer the women we were interviewing more space to really tell their stories,” Yun explains. So, they developed Spotlight, a Q&A series that highlights women of color working to better their communities.

In the past few years, We, Ceremony has grown further still, with a monthly newsletter, public speaking gigs, and local events among its offerings. The digital component fosters a global reach, while the events help build meaningful interpersonal connections within the network. Their most recent panel, for example, called Contemporary Women of Color Making History, drew a packed house at Cambridge Public Library. Yun and Panameño have also been tapped to discuss programming for City Awake, a program within the Boston Chamber of Commerce strategizing how to keep millennial talent in the city.

When asked about her successes thus far, Yun balks a bit, instead crediting those who have supported her, especially her parents. They worked to ensure Yun and her sisters would be the first ones in the family to go to college. “I continue to thank my parents for their open-mindedness,” she says. “They’ve always encouraged us to do what makes us happy, as long as we do it with dignity.”

It's admirable advice, but it’s not surprising – that dignity resonates throughout We, Ceremony’s content, with imagery that’s bright, fresh, and decidedly self-assured. It’s evident, as well, in how Yun and Panameño manage their organization. “As we continue to grow, it's never been a compromise for us to think about paying or compensating our speakers or the women we work with,” Yun says, so they secured a mentor through the Small Business Administration’s SCORE program – he’s helping them design a profit model so they can put their money where their values are. “Our time and personal stories [as women of color] are valuable, and people need to start recognizing that.”

Learn more about We, Ceremony 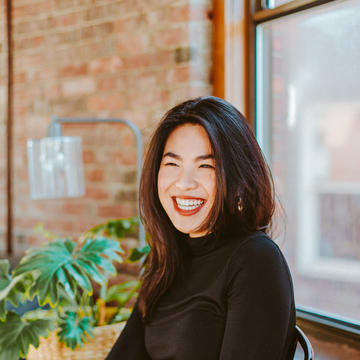