The event was held at Boston University’s Agganis Arena. 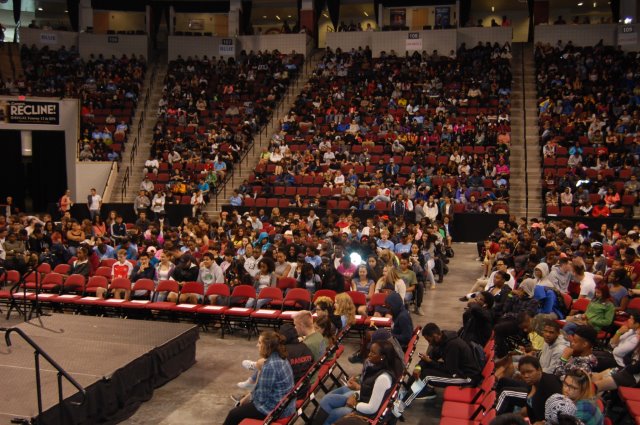 “You are the future and I have no doubt --and hope-- that one of you will have my job someday,” said Felix Arroyo, Boston’s Chief of Health & Human Services. “Today is about providing you with the knowledge and tools to help you get the most out of your summer job experience and laying the foundation for success.”

“A summer job is so important because it helps shape the person you become, foster relationships you will rely on and develop the work ethic you have throughout your life,” said William Morales, Commissioner of Boston Centers for Youth & Families (BCYF.) “In this room are people who care about you and are here to make sure you feel confident and supported as you head off to work.”

The young people who attended Youth Enrichment Day will be working across the City in a variety of jobs such as staffing summer camps and programs, helping out at Boston’s museums and cultural locations, supporting businesses downtown and more. The workshops provided the youth - many of whom have never worked  before - with the tools for success at work, how to make better decisions with the money they will earn and addressed the important topic of teen suicide with the older youth at the event. The Samaritans shared that suicide is the second leading cause of death among teenagers and adults up to age 34 and the annual number of suicides in Massachusetts is almost 4 times higher than all homicides, and greater than all homicides and traffic fatalities combined.  People can now call or text Samaritans Statewide Helpline 877-870-HOPE (4673) in MA 24 hours per day.

In addition to the City's Chief of Health & Human Services, Felix Arroyo, Boston Centers for Youth & Families Commissioner, William Morales, and Jermaine Wiggins, also participating in the event was Kenneth Elmore, Associate Provost and Dean of Students at Boston University.

Mayor Walsh has made youth summer employment a priority for his Administration, pledging to place approximately 11,000 Boston youth in meaningful summer employment. In the FY17 budget, Mayor Walsh has allocated over $5 million to fund youth jobs through the BCYF Division of Youth Engagement & Employment. In addition to SuccessLink, several partnering organizations help the City to hire youth through the Mayor's Summer Jobs Program.