"Boston's older residents are strong in so many different ways -- with strong experiences, cultures, and voices," said Mayor Walsh. "We want to evolve the conversation around aging and make sure that the images and stories we share help expand what it means to age in our city. Older Bostonians bring so many dynamic experiences to our community, and we want more people to see that and embrace it."

The multifaceted campaign features eight older Bostonians who defy negative stereotypes about aging. In the advertisements, the models stand boldly under labels that often get placed on older people: frumpy, cranky, inactive, senile, frail, childish, over the hill, and helpless -- and their stories counter those biases. The advertisements will be featured across the city on bus shelters, in Boston Public Library locations, in a 30-second television commercial, and on digital signage through this fall. 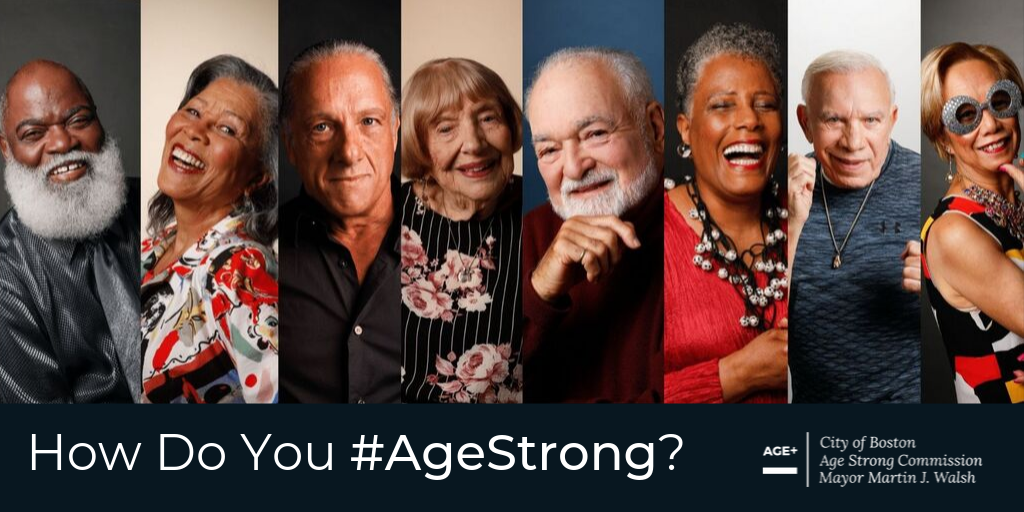 The Age Strong Commission has actively engaged with the community to learn how Bostonians are aging now and what their hopes are for aging in the future. Those conversations reflect a growing trend and national movement towards more inclusive aging language and actions, designed by the FrameWorks Institute, the research partner for the Reframing Aging Project.

"The stories of real people matter. Boston's reframing aging campaign challenges us to rethink older people and the words we use," said Nora Moreno Cargie, president of Tufts Health Plan Foundation and vice president for corporate citizenship at Tufts Health Plan. "This is one of many actions already taken by the city. It is adapting its systems and programs to be relevant for older people and include our voices, our stories, our experiences in solutions. City leaders are showing us what it means to Age Strong."

This Age Strong public awareness campaign comes three years into the Commission's Age-Friendly Boston Action Plan which details 75 concrete action items the City will take to become even more age friendly. Currently in its third year, it has already celebrated the successful launch of several action items including the City's first pilot Senior Civic Academy; an interactive public restrooms map; an age- and dementia-friendly business designation; an employment guide for people over 50; and most recently the unveiling of a bench program raising the availability of resting locations for older adults.

"Prejudices about groups of people negatively contribute to their health and well-being outcomes," said Boston Chief of Health and Human Services Marty Martinez. "This anti-ageism campaign helps us counter those stereotypes about aging that can hold people back, so that we can age even better in Boston."

"I am living my best life and I am thrilled to be a part of Boston's Age Strong campaign!" said Sandra Harris, Massachusetts state president of AARP and featured model in the campaign. "As a Boston resident, I am blessed to live in a city that values all I continue to bring to the table, and I appreciate the opportunity to redefine what it means to get older. It's not about defying or denying aging, it's about owning your age."

"Just because you're older doesn't mean you are inactive," said 103-year-old Irene Morey, a Boston resident featured in the print and multimedia campaign. "I'm far from senile--I'm aging strong!"

For more information about the campaign, please visit boston.gov/agestrong

About the Age Strong Commission

The Age Strong Commission works towards making Boston a city that fully embraces aging. Our mission is to enhance the lives of people 55+ with meaningful programs, resources, and connections so we can live and age strong together in Boston. For more than 50 years, we have served constituents as a City department, Council on Aging, and Area Agency on Aging. In 2017, the Commission launched its Age-Friendly Action Plan, which is the City's blueprint to make Boston the best city to live and age in. Learn more at www.boston.gov/age-strong.