Today, we look back to the day the Frederick Douglass first spoke at Faneuil Hall.

In 1829, Mexico abolished slavery, threatening the power of slaveholders who wanted to expand the territory in which slaves could be legally held. For the next two decades, a battle would be fought over the status of Texas. In a speech in Belfast, Ireland, in 1846, the fiery abolitionist Frederick Douglass described the U.S. annexation of Texas as a "conspiracy from beginning to end— a most deep and skillfully devised conspiracy — for the purpose of upholding and sustaining one of the darkest and foulest crimes ever committed by man." In this speech1, delivered in Boston in 1849, Douglass, speaking to other abolitionists, calls for forcible resistance against the invasion of Mexico — and against slave owners in the South. 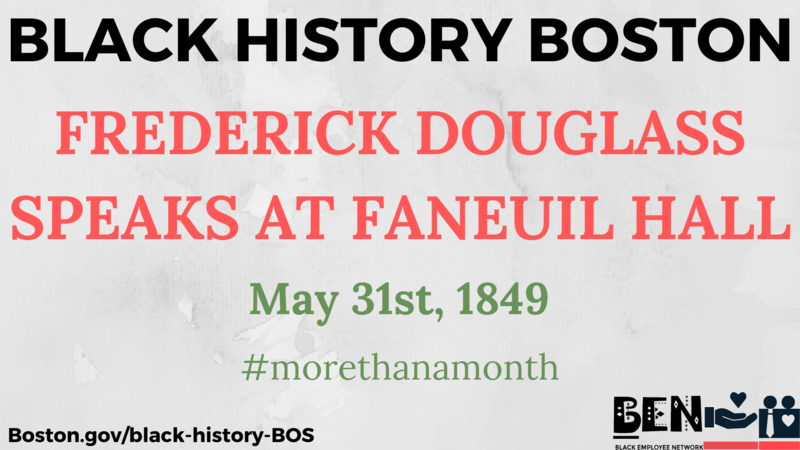 You know as well as I do, that Faneuil Hall has resounded with echoing applause of a denunciation of the Mexican war, as a murderous war — as a war against the free States — as a war against freedom, against the negro, and against the interests of the workingman of this country — and as a means of extending that great evil and damning curse, negro slavery.(Immense applause.) Why may not the oppressed say, when an oppressor is dead, either by disease or by the hand of the foeman on the battlefield, that there is one the less of his oppressors left on earth? For my part, I would not care if, tomorrow, I should hear of the death of every man who engaged in that bloody war in Mexico, and that every man had met the fate he went there to perpetrate upon unoffending Mexicans. (Applause and hisses.)

A word more. There are three millions of slaves in this land, held by the U.S. government, under the sanction of the American Constitution, with all the compromises and guaranties contained in that instrument in favor of the slave system. Among those guaranties and compromises is one by which you, the citizens of Boston, have sworn, before God, that three millions of slaves shall be slaves or die — that your swords and bayonets and arms shall, at any time at the bidding of the slaveholder, through the legal magistrate or governor of a slave State, be at his service in putting down the slaves. With eighteen millions of freemen standing upon the quivering hearts of three millions of slaves, my sympathies, of course, must be with the oppressed. I am among them, and you are treading them beneath your feet. The weight of your influence, numbers, political combinations and religious organizations, and the power of your arms, rest heavily upon them, and serve at this moment to keep them in their chains. When I consider their condition — the history of the American people — how they bared their bosoms to the storm of British artillery, in order to resist simply a three-penny tea tax, and to assert their independence of the mother country — I say, in view of these things, I should welcome the intelligence tomorrow, should it come, that the slaves had risen in the South, and that the sable arms which had been engaged in beautifying and adorning the South, were engaged in spreading death and devastation there. (Marked sensation.) There is a state of war at the South, at this moment. The slaveholder is waging a war of aggression on the oppressed. The slaves are now under his feet. Why, you welcomed the intelligence from France, that Louis Philippe had been barricaded in Paris — you threw up your caps in honor of the victory achieved by Republicanism over Royalty — you shouted aloud — "Long live the republic!" — and joined heartily in the watchword of "Liberty, Equality, Fraternity" — and should you not hail, with equal pleasure, the tidings from the South, that the slaves had risen, and achieved for himself, against the iron-hearted slaveholder, what the republicans of France achieved against the royalists of France? (Great applause, and some hissing.)