Today, we look back to the day Dr. Martin Luther King Jr. led a march from Roxbury.

It’s 1955 in Boston, Massachusetts. Students, parents, families, and loved ones converge on a special day. It is commencement day at Boston University. All of the students in the Boston University School of Theology are grateful to receive their degrees, and reflect back on their times in class. None reflect back more fondly on the papers, presentations, and interactions more than the professors. However, the day is bittersweet for some because there is someone missing from the Commencement. 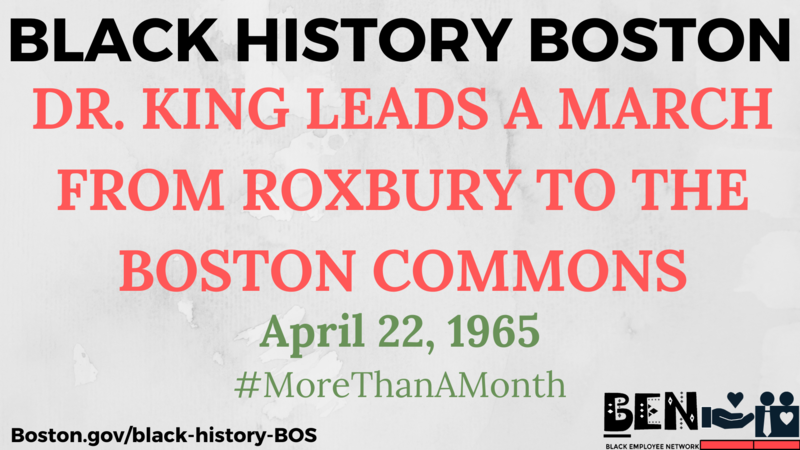 That person that is missing is none other than the great Dr. Martin Luther King jr. He was, unfortunately, unable to attend his graduation then because he and Coretta Scott King, the civil rights leader and Dr. King's wife, were expecting a child and financial reasons made it difficult to travel from Atlanta. Six months later, he was focusing on the Montgomery Bus Boycotts in Alabama, where he began getting national attention for his work.

Martin Luther King Jr. would return to Boston a few times between 1955 and 1965. However, when he returned in 1965, it came a month after the events of Selma. On April 22, 1965, he appeared before a joint legislative session at the Massachusetts State House. During that time, the Ministerial Alliance of Boston was focusing on issues of diversity, race, education, employment and economics. Although all were a concern of Martin Luther King Jr.’s speeches, School Desegregation was the major focus of his speeches.

On April 23, he was taken to Roxbury to lead the first Civil Rights March in the Northeast. He rallied people at the Patrick T. Campbell Middle School (renamed to Martin Luther King Jr. K-8 School), and more than 20,000 people marched from Roxbury down Columbus Avenue to Boston Common.

Learn more about what happened: