Today, we are proud to honor the life and contributions of the inspirational Melnea Cass, the First Lady of Roxbury!

Melnea Agnes Cass (Jones) was born on June 16 1896, in Richmond, Virginia. When she was five, she moved to the South End. Following her mother's passing, her aunt took custody of her and sent her to St. Francis de Sales Convent School in Rock Castle, Virginia, upon seeing her academic potential. Later, Melnea moved back to Boston to find work after graduating from High School. She then met and married an American soldier, Marshall Cass. When her husband was re-deployed to serve in the World War 1, Melnea, with the encouragement of her mother-in-law, got involved in her community as an activist. 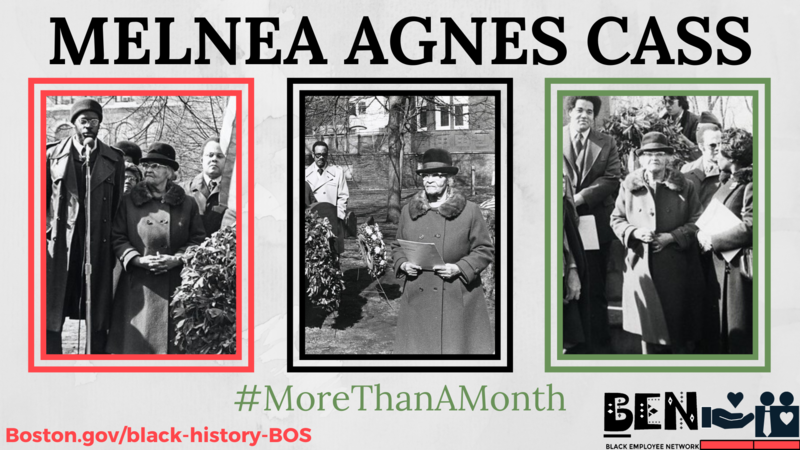 Melnea's first instance of organizing came when she helped African american women register and cast their first vote in 1920. Being deeply influenced by Civil Rights Activist William Monroe Trotter, Melnea decided to join the National Association for the Advancement of Colored People (NAACP). During the 1930s, Melnea volunteered much of her time to helping at community centers, organizing mothers to encourage early education, and helped to form the Boston chapter of the Brotherhood of Sleeping Car Porters, founded by the legendary A. Philip Randolph.

Melnea served as the president of the Women’s Service Club for more than 15 years, helping to ensure access for women to social security and other benefits. With the leadership of Muriel and Otto Snowden, she helped to found Freedom House, an organization dedicated to advocacy for African Americans in Boston.

In 1950, John Hynes, the Mayor of Boston, appointed Melnea as the only woman charter member of the Action for Boston Community Development (ABCD), which assisted people who lost their homes to urban renewal efforts. From 1962 to 1964, she served as the President of the Boston NAACP and organized demonstrations against the segregation in the Boston Public Schools. From 1975 to 1976, Melnea Cass was chair of the Massachusetts Advisory Committee for the Elderly.

Melnea Cass had an extensive organizing career and is one of Boston’s greatest advocates. Melnea was unmatched in her pursuits of educational equity, economic development, and racial equity for the black community. The residents of Roxbury gave Melnea the nickname the "First Lady of Roxbury" for her years of dedication to the people of Roxbury. She was known for saying: "If we cannot do great things, we can do small things in a great way.”

Thank you, Melnea, for your tireless service to the people of Roxbury!!