Bluebikes expand into Mattapan and Roslindale

Eighty new Bluebikes stations being installed throughout Boston include the first bike share stations for Mattapan and Roslindale.

Mayor Martin J. Walsh today joined community members, Blue Cross Blue Shield of Massachusetts, and the Boston Transportation Department to celebrate the bike share stations that have been installed in Mattapan and Roslindale, marking the first stations in those neighborhoods. The new installations are part of a larger expansion project that will add 80 new Bluebikes stations in Boston, bringing the total number of stations in the city to 215 by the end of 2019. Expanding access and improving reliability in bike share is a goal of Go Boston 2030, the City of Boston's transportation plan. 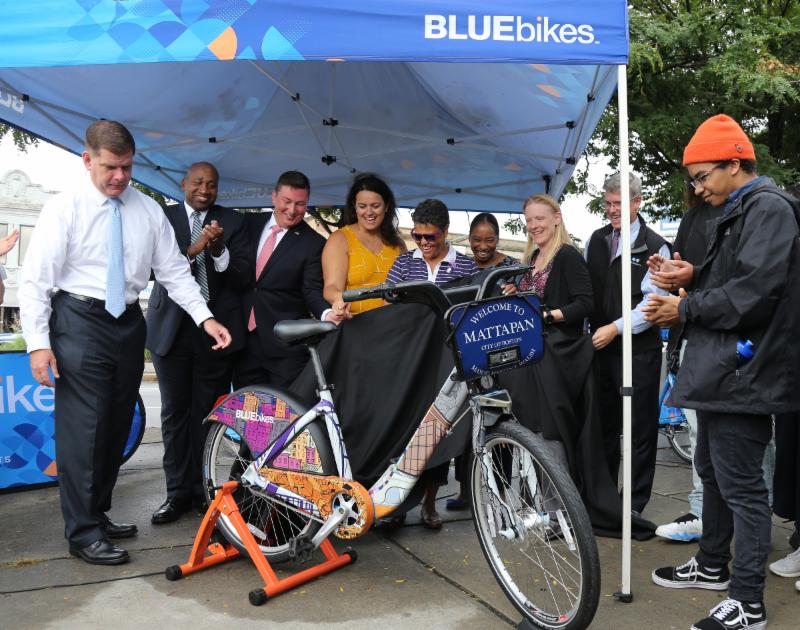 "Celebrating the opening of the first bike share stations in Mattapan and Roslindale represents a milestone reached as we work to improve transportation safety and access for all users of Boston's streets," said Mayor Walsh. "Expanding Bluebikes further into Boston's neighborhoods is a key goal of Go Boston 2030 and reflects the priorities of thousands of residents who actively participated in guiding the development of the plan."

Bluebikes is a bike share program jointly owned and managed by the municipalities of Boston, Brookline, Cambridge, and Somerville. Systemwide, by the end of 2019, Bluebikes members will have access to 3,000 bikes to be found at 300 conveniently located docking stations throughout the four partner municipalities.

"To support Bluebikes riders and all cyclists on our streets, the City of Boston is also improving its bike infrastructure," said Chief of Streets Chris Osgood. "We continue to plan, design, and build out a network of safe bike lanes that are protected or low-stress and that better connect neighborhoods, open space, employment centers, and educational services."

"Bluebikes is public transportation by bike," said Transportation Commissioner Gina N. Fiandaca. "Our bike share program gives residents and others a low-cost, healthy, and reliable transportation option in Boston, Brookline, Cambridge, and Somerville. Bluebikes is also handy for people to use in conjunction with the MBTA to connect from the bus stop, trolley stop, or train station directly to their end destination."

Blue Cross Blue Shield of Massachusetts, title sponsor of Bluebikes, is providing the financial support necessary to expand the popular bike-share system throughout the four partner municipalities. As part of the sponsorship, the existing system became Bluebikes in May 2018 to reflect Blue Cross' six-year commitment to supporting growth and expansion. This sponsorship has also allowed for upgrades to the Bluebikes system including improved gearing systems, new baskets, seat accommodations for a wider range of heights, and valet service at the busiest stations to ensure bike availability.

"BlueCross is thrilled to continue working alongside our Bluebikes partners to expand bike-share access throughout the Metro Boston area, especially for underserved areas where we know there's been high demand," said Andrew Dreyfus, president and CEO of Blue Cross Blue Shield of Massachusetts. "We're hoping these new station locations will encourage more residents to give Bluebikes a try. We're very proud to support this program, which reflects our mission to help Massachusetts residents lead healthy lives."

Over the past year, a comprehensive public process was undertaken to determine the optimal locations in Boston for Bluebikes expansion. The Boston Transportation Department (BTD) hosted 28 public workshops and 11 open houses, shared information at community meetings and through neighborhood newsletters, and provided a format for online participation that garnered more than 1,600 comments on 140 potential locations.

Two of the new bikes unveiled this week are specially designed to showcase the Mattapan and Roslindale neighborhoods of Boston. The bikes were created by youth artists involved with Artists for Humanity, which BTD hired to create unique bikes for the City's fleet. BTD worked with Artists for Humanity on other bikes in recent years, including those that celebrate Dorchester, Roxbury, and East Boston neighborhoods and to celebrate the Connect Historic Boston infrastructure project.