Boston on the '30s: the girls high school experiment

In 1830, Boston had just concluded a radical experiment — a high school for girls. 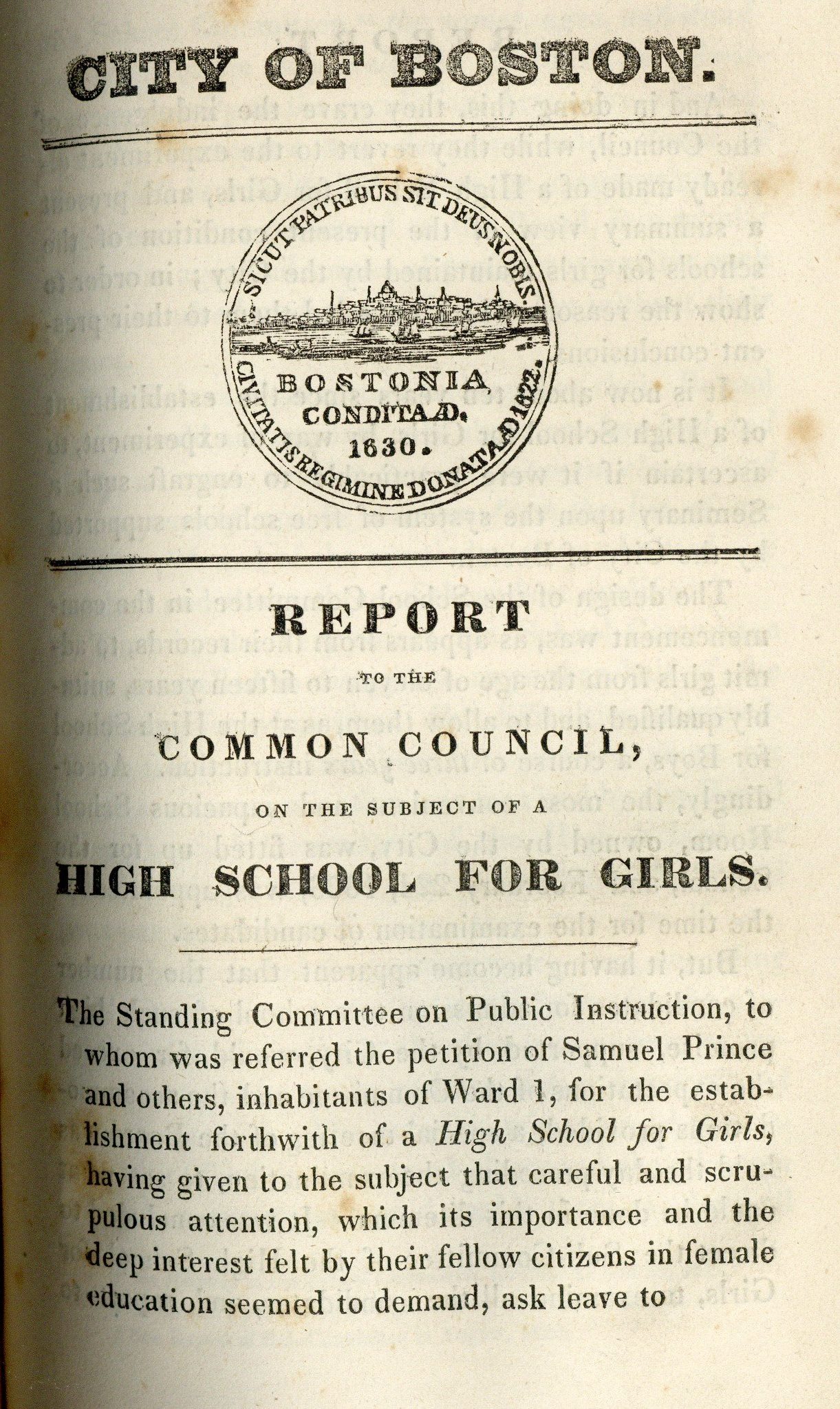 In 1826, a group of Bostonians, led by a man named Samuel Prince, petitioned the City to provide a high school for girls.  Prior to Samuel Prince's petition, girls in Boston were allowed to attend Boston's public grammar schools six months a year, from April to October. They could only attend public schools until they were 14 years old. In contrast, Boston's boys could attend high schools after age 14, provided that they passed qualifying examinations. Some of Boston's families sent their daughters to private schools, where girls could remain in school past the age of 14. Private schools, however, cost money, and many families could not afford  to send their daughters to private school.

Boston's Committee on Public Instruction decided to conduct an experiment. They would open a high school for Boston's girls on a trial basis.

On February 22, 1826, Boston held an examination for girls ages 11-15 who wished to attend the high school. They expected that a little more than 100 girls would pass the exam, so they planned to provide 130 seats for female pupils. To their surprise, 286 girls passed the exam. Because of a lack of space, the Committee was forced to deny admission to girls under the age of 12. 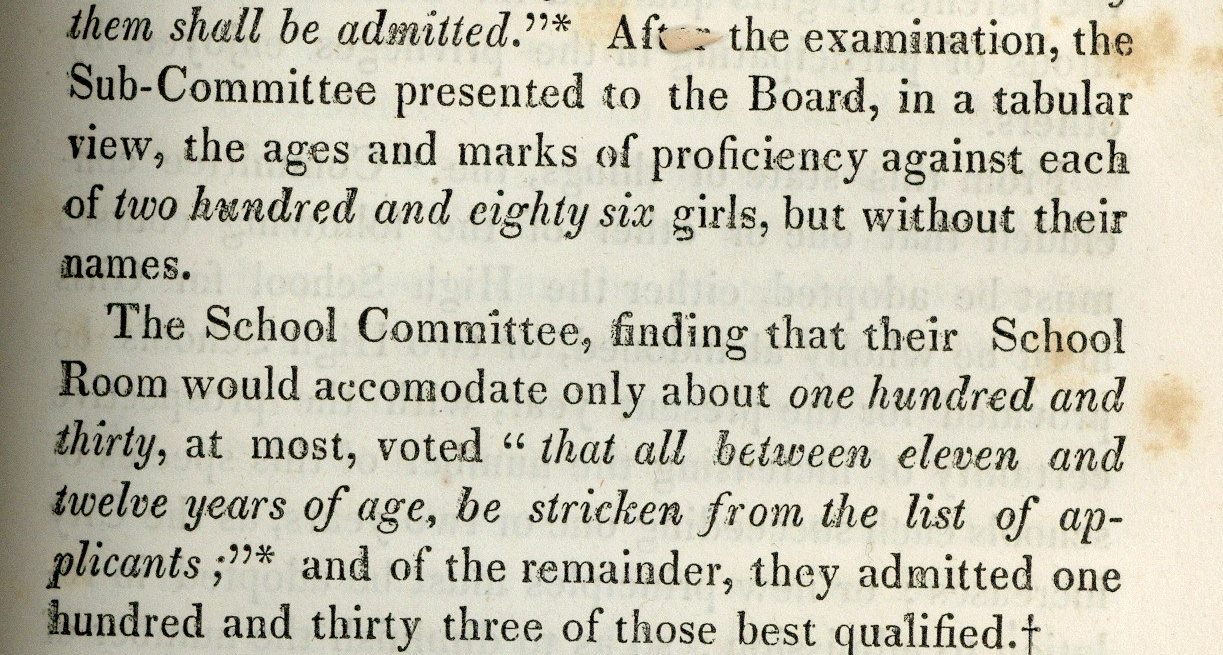 Classes started smoothly. After a few months, the high school reported that its pupils were doing so well and were so enthusiastic, that they expected few — if any — dropouts.  Furthermore, Boston had enough qualified female candidates for the high school that the school would need 427 seats the following year. This trend continued into 1827. By 1828, the school was so successful and Boston's girls were so interested in attending, that they needed seats for 800-1200 students.

Part of the reason that the high school's numbers increased exponentially was that Boston's girls were more likely to complete high school than Boston's boys. The Committee observed that during its experiment, "not a single Girl voluntarily left the High School....whereas the Boys who enter the High School are constantly leaving it as places in stores and counting rooms are found for them; and a very small proportion for those who enter continue thorough three years' course." Boston's boys took advantage of the many employment and apprenticeship opportunities available to them. Boston's girls, who had fewer employment options, stayed in high school.

At this point in the story, we would expect that the high school for girls would be pronounced a success, and that more high schools for Boston's girls would be started around the City. Instead, the City decided to close the school.

The Committee on Public Instruction decided that providing a high school education to such a large number of girls was unsustainable.  In 1836, the Committee wrote a report on their experimental high school. "If a High School for Girls be necessary," wrote the Committee, "we must establish not one only but an indefinite number."  The Committee believed that there would be at least 1500 qualified girls who would want to attend the school. These 1500 girls were never given the opportunity to attend. The City closed the school in 1828, after only 2 years. 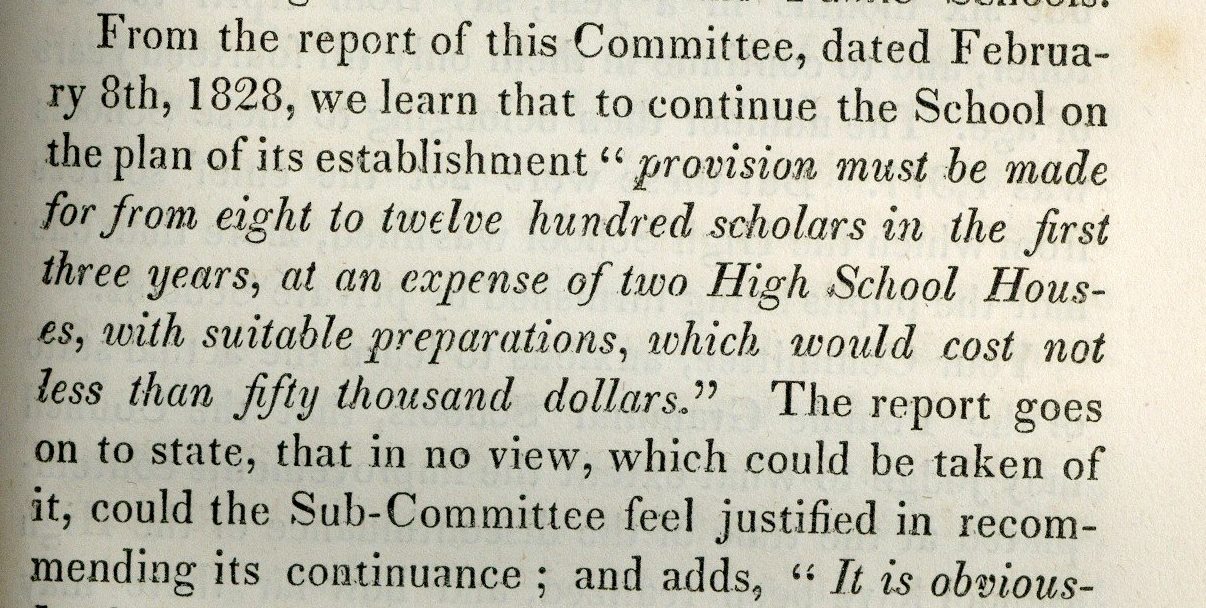 Though the high school closed, some small strides were made for women's education in the City. After the school closed, girls were allowed to stay in grammar school until they were 16 years old. Additional subjects were added to the grammar school curriculum for girls. By 1836, girls were learning history, geometry, algebra, astronomy, natural philosophy, and book keeping. Unsurprisingly, many of the girls showed an enthusiasm for and mastery of these subjects.

The Committee argued that this expanded curriculum made a high school for girls unnecessary. "Each of these Schools, with little or no additional expensive to the City, may be rendered capable of bestowing upon the Females of Boston an education similar and equal in value to that acquired at the late High School for Girls," argued the Committee.