"The Embrace" is a bronze figural abstraction based on a photo of an embrace between Dr. Martin Luther King, Jr. and Coretta Scott King.

Mayor Martin J. Walsh, together with the Mayor’s Office of Arts and Culture, the Boston Art Commission (BAC), and King Boston/The Boston Foundation, announced the Boston Art Commission has voted to approve the final design for "The Embrace", by artist Hank Willis Thomas on the Boston Common, as proposed by King Boston acting by and through The Boston Foundation. "The Embrace" is a bronze figural abstraction based on a photo of an embrace between Dr. Martin Luther King, Jr. and Coretta Scott King. The artwork differs from the singular, heroic form of many memorials to Dr. King and others, instead emphasizing the power of collective action, the role of women as leaders, and the forging of new bonds of solidarity out of mutual empathy and vulnerability.

The sculpture, which invites visitors to gather and enter into the Kings’ embrace, is a key component of an extensive vision led by King Boston to create a living memorial and programs honoring the legacy of Dr. Martin Luther King, Jr. and Coretta Scott King and ushering a climate of economic justice and racial equity in the city. The new memorial, initiated by a partnership between the City of Boston and King Boston as a result of calls for a memorial to Dr. King spanning several decades, will spark a public conversation about how to advance racial and social justice in Boston today.

“With this vote, we are one step closer to seeing this memorial come to life in our city, recognizing Dr. Martin Luther King, Jr. and Coretta Scott King’s trailblazing legacy,” said Mayor Walsh. “It will be a constant source of inspiration for all residents and visitors to Boston, and will play an important role in marking the progress we’ve made in addressing inequity in our city, and reminding us of the work that still needs to be done.”

The memorial will be located on the Boston Common, adjacent to the Parkman Bandstand, where Dr. King spoke in 1965. It is planned to be installed and accessioned as part of the City’s public art collection in 2022, and will serve as a living space for conversation, education, and reflection on the Kings’ time in Boston and the racial and economic justice ideals they put forth to the community.

This project was initiated by entrepreneur Paul English, who convened an Art Committee with his co-chair Rev. Liz Walker to begin the design process for the memorial. The City released a Call to Artists, and received responses from 126 artists teams around the world. The Art Committee selected five finalist teams, and their concepts were shared for public input in the summer of 2018. After receiving approximately 1,000 public comments, three teams were invited to move on to the feasibility stage, where a team reviewed the practicality of each design. In March 2019, the Boston Art Commission selected The Embrace by artist Hank Willis Thomas and MASS Design Group as the design for the memorial. 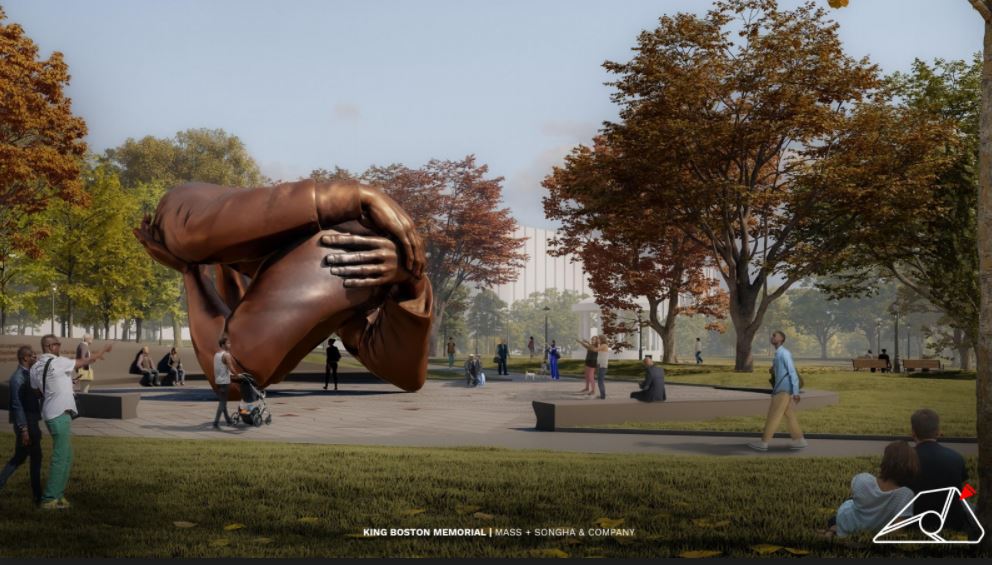 “This is a really exciting moment and opportunity for us in this project, which honors the legacy and love of Dr. Martin Luther King, Jr. and Coretta Scott King,” said artist Hank Willis Thomas. “The Boston Common is the oldest city park in the country, and we are proud that this public monument will make history in this historic place.”

The BAC vote for the final design of The Embrace was unanimous, contingent on the completion of a memorandum of understanding addressing details such as a maintenance fund, and with the understanding that King Boston would return to the BAC for further review if any substantial changes were made. King Boston will continue to work with the Parks Department on review of the plaza, which includes a quotation by Coretta Scott King. Because Boston Common is a Boston Landmark, the site will also need to be approved by the Boston Landmarks Commission prior to installation.

"It has been a pleasure to be able to witness all of the wonderful work that has gone into this project, especially the community process," said Ekua Holmes, Vice-Chair of the Boston Art Commission. "We were able to engage the multitude of voices that make up our city in conversation about the future of public art. The Embrace represents our rich history and our shining future.”

“It is no longer appropriate to build monuments of stone and steel without articulating the values and ideals of these structures,”  said Imari Paris Jeffries, Executive Director of King Boston, which the Boston Foundation hosts. “The Embrace Memorial is the first step alongside the King Center for Economic Justice and Embrace Ideas that represent Boston’s values of inclusion, racial equity, and justice. We appreciate the partnership of Mayor Walsh, the Office of Arts and Culture, and the Boston Art Commission in creating a sculpture that both honors the space, the enduring legacy of the Kings, and sets the tone for a post-pandemic city.”

Learn more about the project.

ABOUT MAYOR’S OFFICE OF ARTS AND CULTURE

The Office of Arts and Culture enhances the quality of life, the economy, and the design of the City through the arts. The role of the arts in all aspects of life in Boston is reinforced through equitable access to arts and culture in every community, its public institutions, and public places. Key areas of work include support to the cultural sector through grants and programs, as well as the production and permitting of art in public places.