The survey is available through April 2.

The Boston Parks and Recreation Department today announced that an online survey is available for members of the public to provide input on preliminary designs for an Action Plan being developed for Franklin Park, Boston’s largest park at 527 acres and the anchor of Frederick Law Olmsted’s Emerald Necklace. These designs are presented by project planners, based on three community workshops hosted by the Boston Parks and Recreation Department. Feedback provided through the survey will help the team refine design proposals and will inform priorities for implementation planning in the final phase of the project. The survey is available on the project website.

The recommendations, which were informed by feedback from community members through this process, are framed by four major themes. During the workshops, planners shared a preview of preliminary design ideas for Franklin Park as well as opportunities for attendees to inform the team’s design decisions by sharing ideas and feedback. The recommendations include: 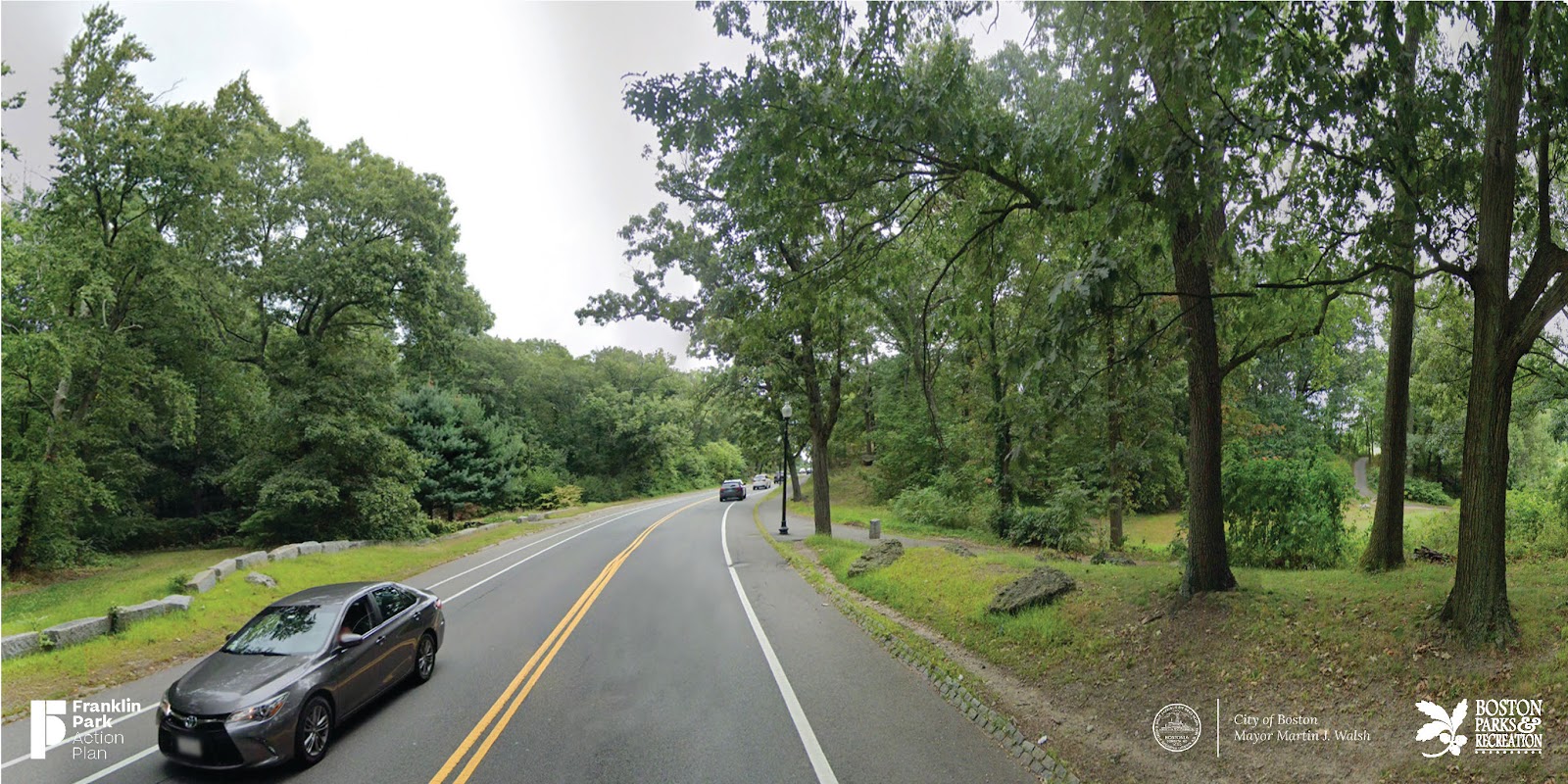 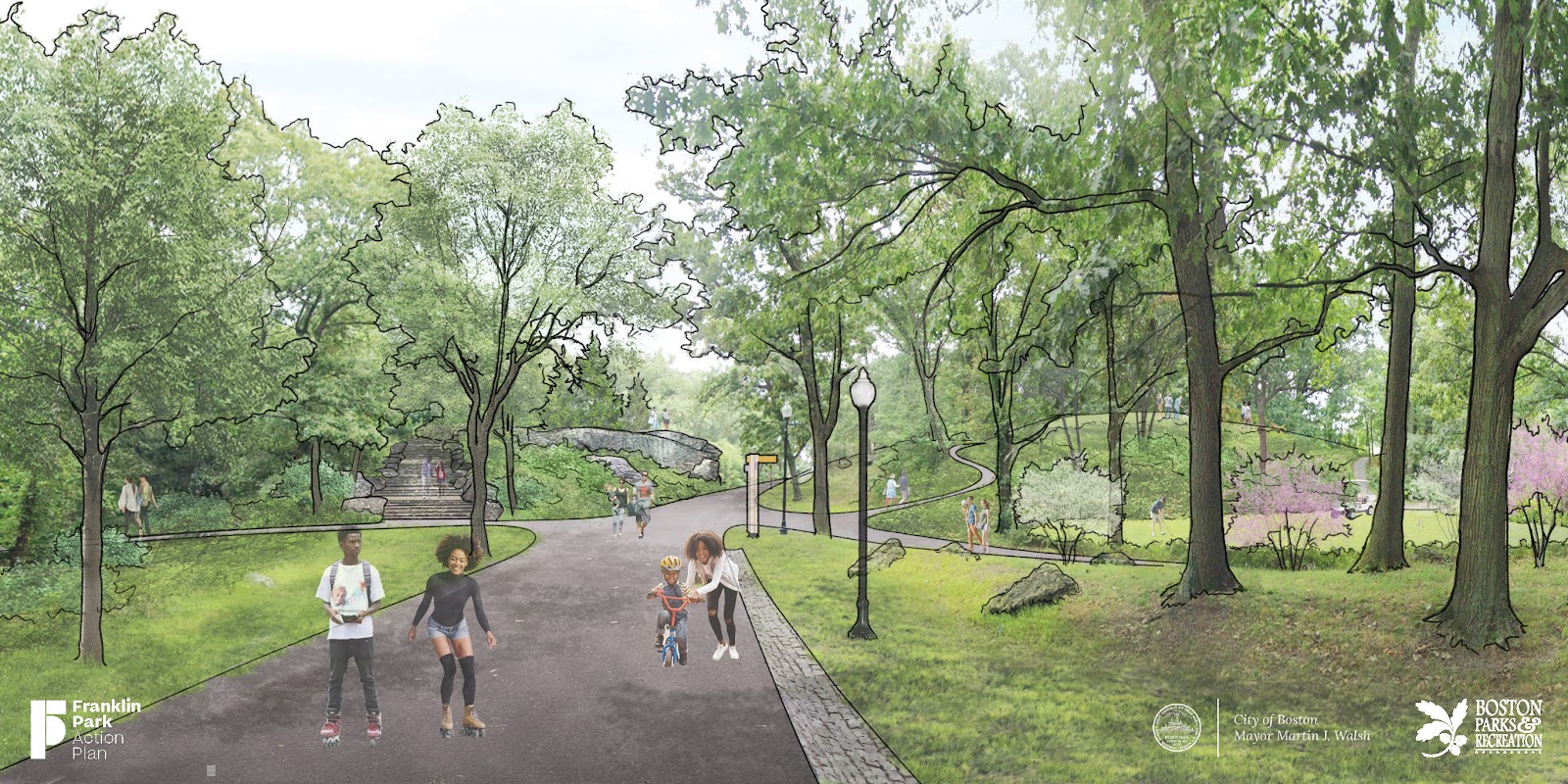 This recommendation reimagines four beloved areas of Franklin Park, including The Playstead, Ellicottdale near the Shattuck Hospital, Peabody Circle at the park’s main entrance, and the current Maintenance Yard. The proposals include site improvements, increased access, and programming. 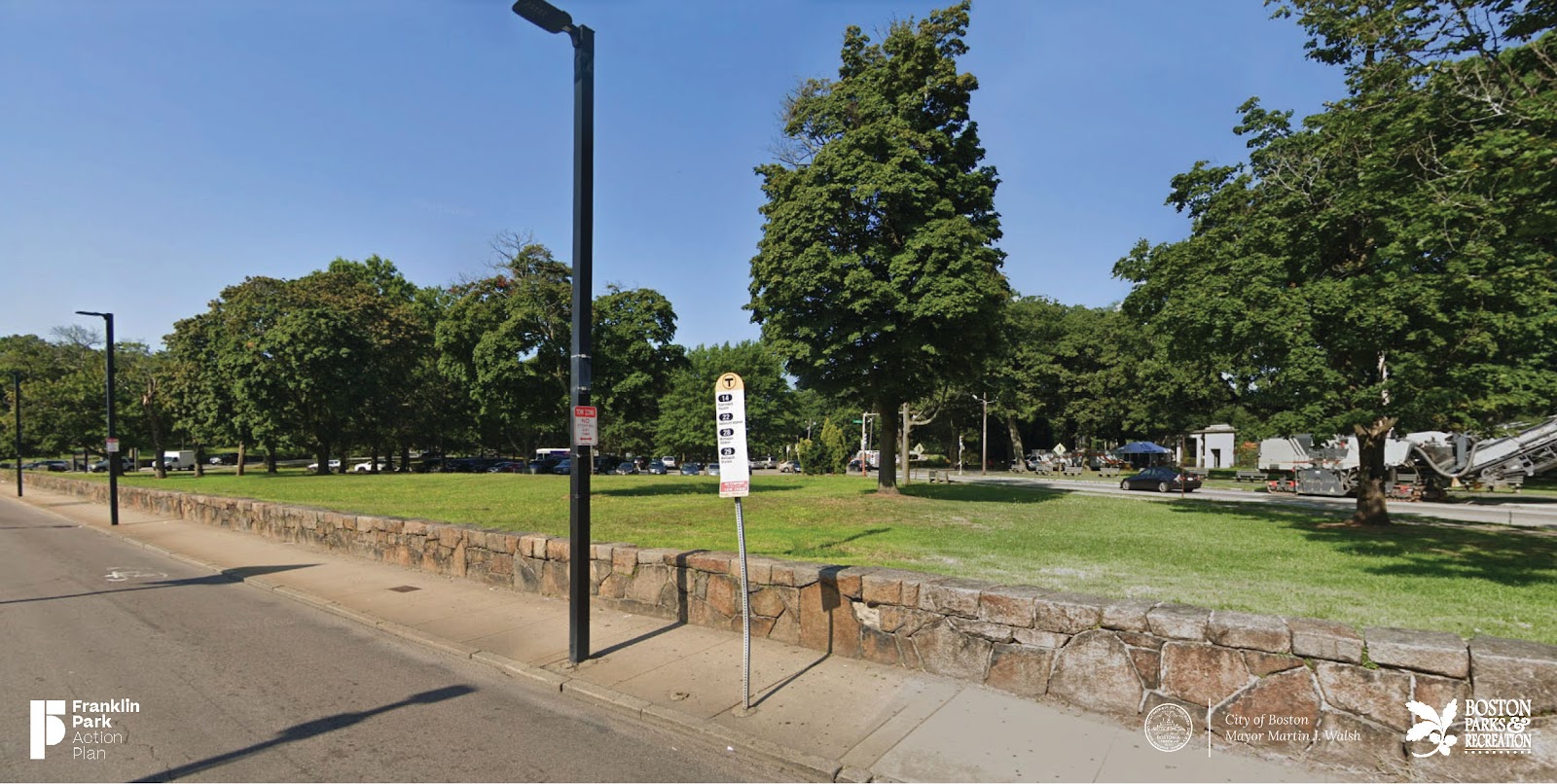 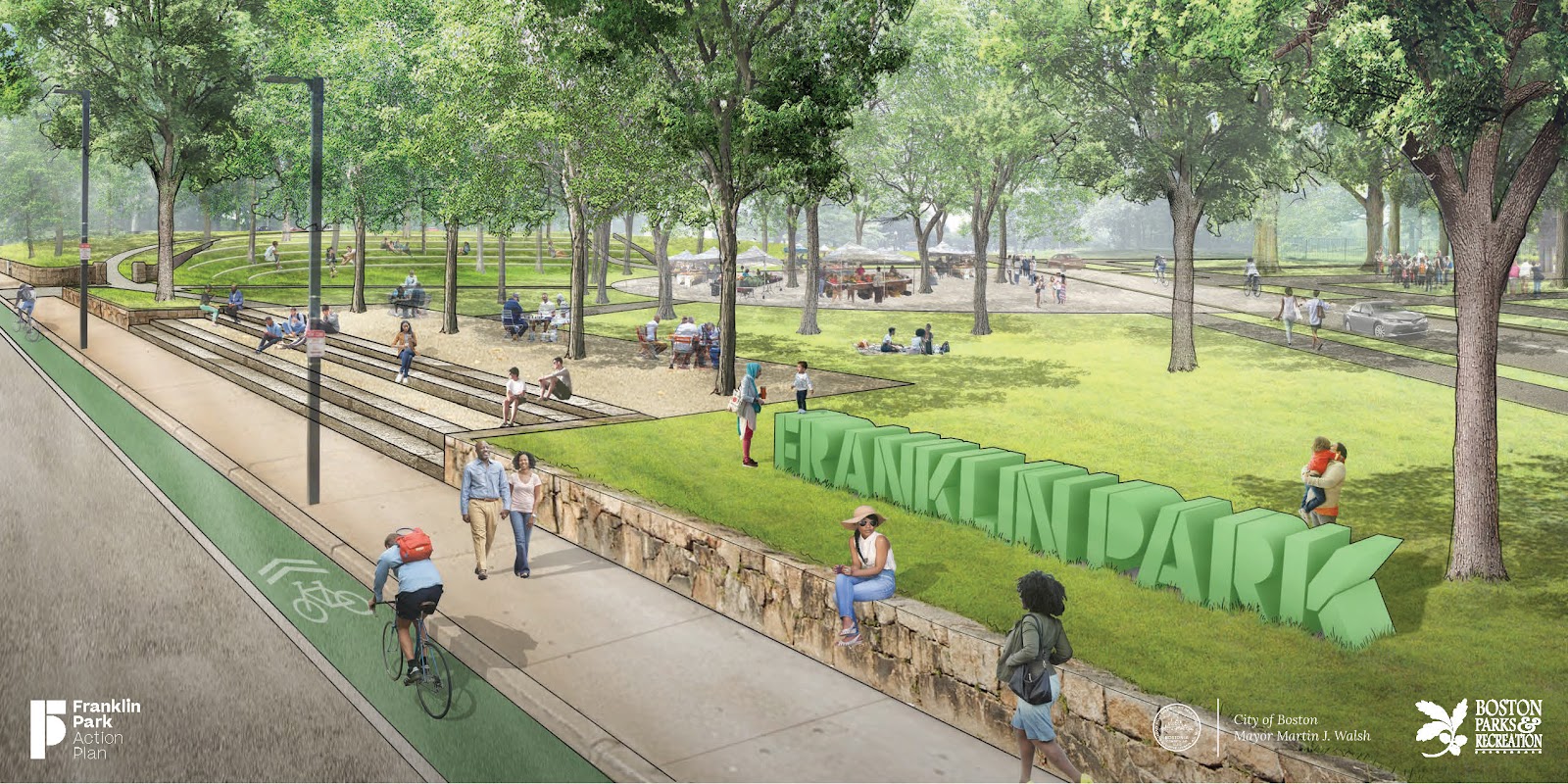 This recommendation considers ways to enhance or increase relationships between the park and its neighborhoods. This includes strategies to increase access through new and improved park entrances, making the park edge an inviting and comfortable place.

This recommendation identifies opportunities to connect the park physically and ecologically, including the park’s woodlands. This will require invasive management and selective clearing to increase biodiversity and cultivate a new generation of canopy trees. Additional proposals focus on increasing habitat diversity and improving stormwater management with buffer planting of meadow and understory flowering and fruiting plants, largely missing in the park landscape today. Proactive care of the park’s heritage trees, many of which date to the 19th century, is also highlighted as a management priority.

“More than 360 park neighbors and users attended our third round of public workshops on March 10,” noted Boston Parks Commissioner Ryan Woods. “These participants viewed the public presentation and took part in breakout room discussions with the design team, Boston Parks and Recreation staff, and members of the Franklin Park Coalition and Emerald Necklace Conservancy. We encourage park users to add their voices through the Franklin Park Action Plan survey as we map out the future of this historic landmark.”

“Franklin Park is a treasured resource for the neighboring communities and for the City of Boston. The design team strives to build on the park’s current strengths—it is so well-loved today—and to help the park work even harder for the community,” said John Kett, managing principal of design firm Reed Hilderbrand. “Rooted in Frederick Law Olmsted’s original goals of the park as a place for everyday encounters, we hope to unify the park and make stronger connections between the park and its adjacent communities. With these improvements, the park users will once again take center stage, with increased opportunity to move throughout the park and to take better advantage of all that it has to offer. We want to hear from as many people as we can to ensure that we are meeting the aspiration set forth by the City: a park that continues to be open and welcoming to all who visit.”

The 10-minute survey is open until April 2 on the project website. Individuals can also find resources, including a recording of the most recent meeting, a PDF of the full presentation, and a summary slide deck. For free interpretation and translation services, please contact Lauren Bryant at Lauren.Bryant@Boston.gov or 617-961-3019.

Following the previous announcement of the revitalization of Franklin Park with the sale of the Winthrop Square Garage, the Boston Parks and Recreation Department launched a new action plan for the park. This includes $23 million for the project budget and $5 million for a maintenance and programming endowment. The project team consists of landscape architects, planners, ecologists, and community engagement experts to create a community-driven action plan for an engaging and diverse Franklin Park. 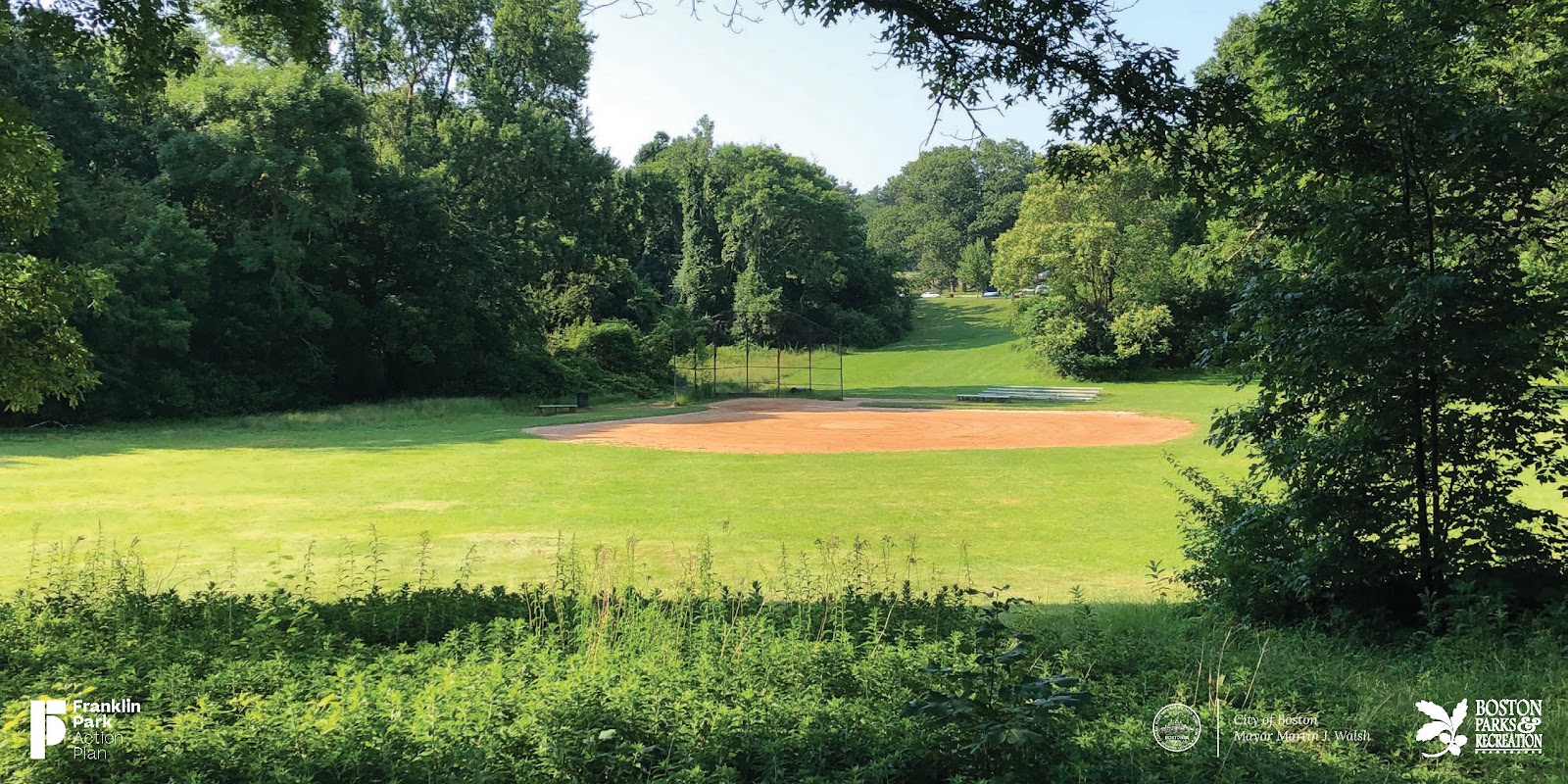 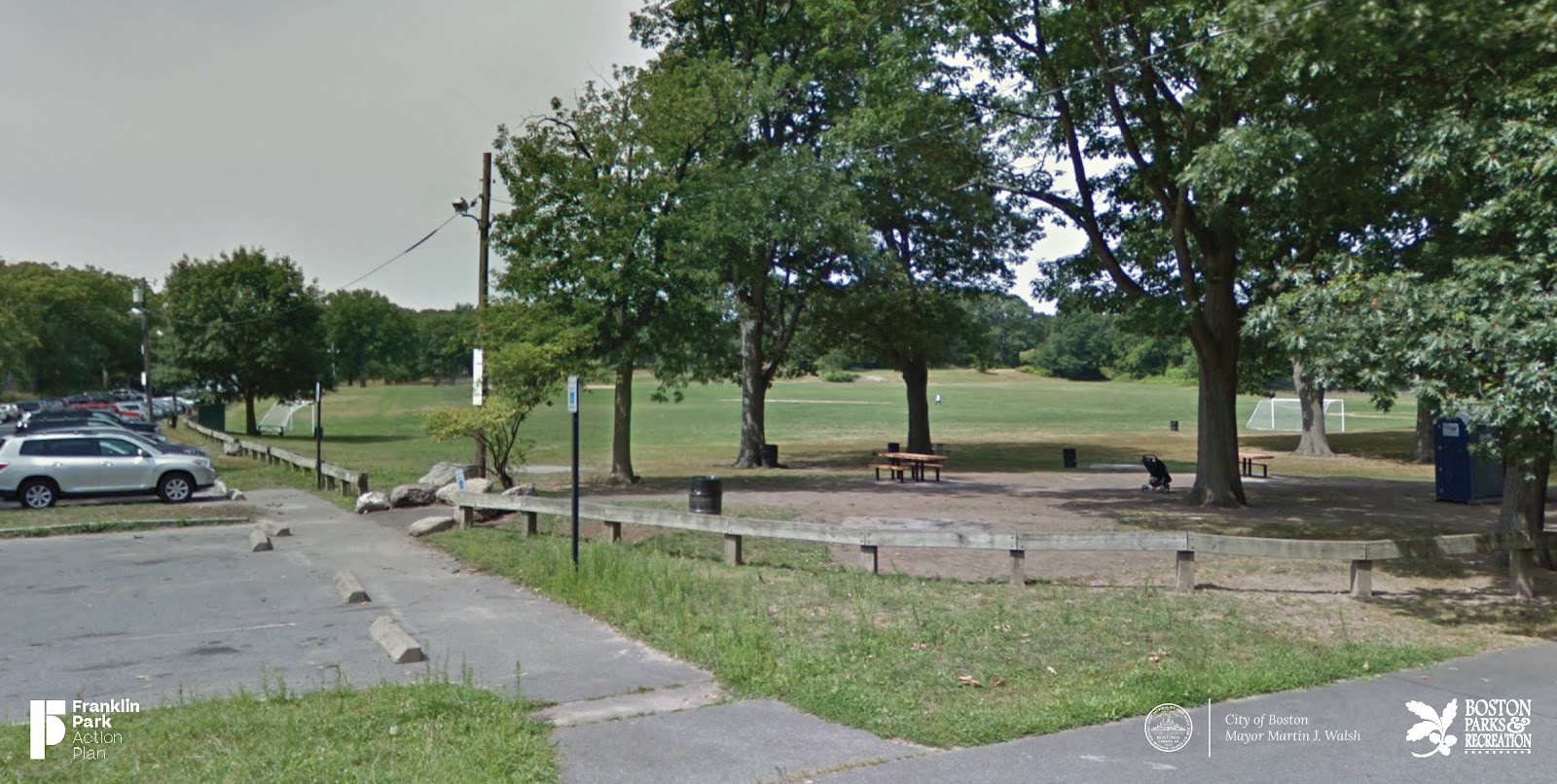 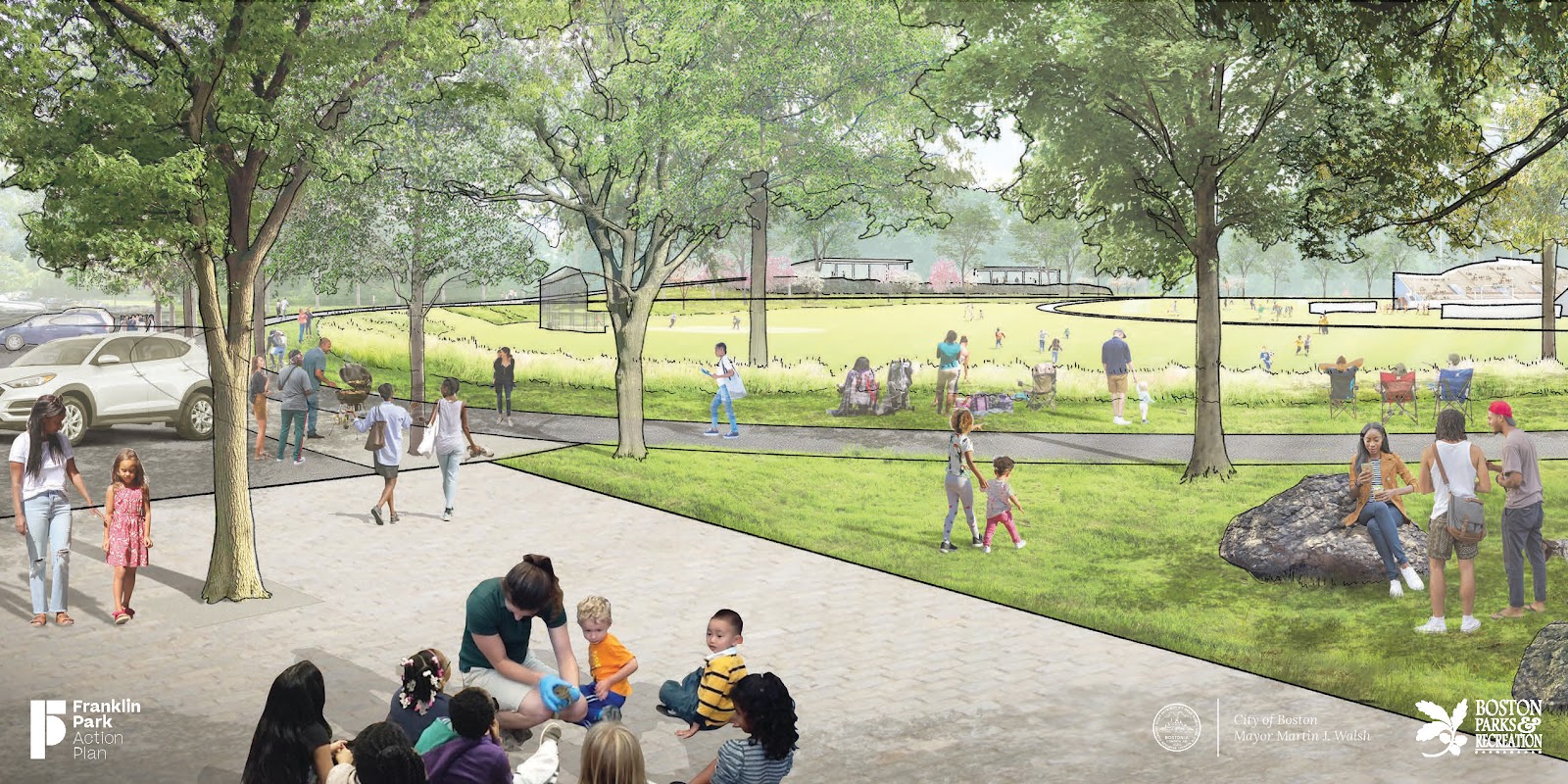 The Playstead now (top) and proposed improvements, including rejuvenated sports fields, increased access to White Stadium, and gathering areas, including new pavilions at The Overlook (bottom)