12-14 Winter Street is a small-scale version of the Gothic-inspired early 20th century terracotta commercial buildings located nearby at 143-47 and 31-39 Washington Street, notable for its green color and terra cotta detailing. 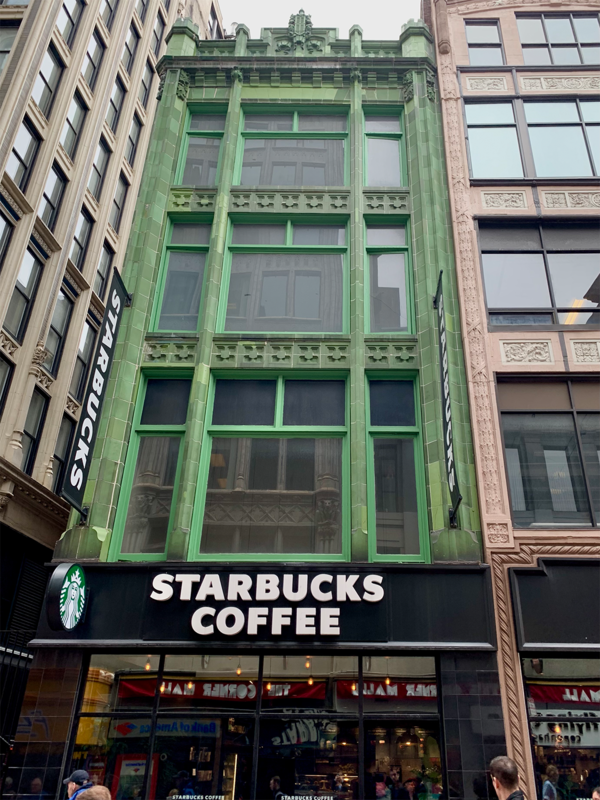 The original tenant may have been the Jackson Confectionery Co, which is first listed at this address in the 1917 Boston City Directory. Jackson's also had outlets on Federal St. and Summer St.

The terracotta facade may have replaced the facade of an earlier 1878 building that previously stood on this site. Building Department records contain a 1915 permit for interior alterations, signed by architect Arthur H. Bowditch. Although this permit is clearly for interior rather than exterior alterations, it does raise the possibility that Bowditch was the architect of the new facade as well. The facade closely resembles those of other Bowditch buildings, particularly the Gothic terracotta facade of the adjacent Winter Street Building of 1913.

This building has retained its essential historic character and architectural style dating to about 1915—despite a fire on the third floor of the four-story building on January 30, 1925, after which it was evidently restored. The original 1980 survey form states that the storefront had been modernized, though the associated photograph does not illustrate this. However, in 2000, the storefront was restored by Starbuck’s Corp.

The subject property was owned by Dr. David H. Storer, a physician who had his office and his home at 14 Winter Street in 1855. He was born on March 26, 1804, in Portland, Maine, and had relocated from there to Boston by 1826. Initially he was living and working at 298 Washington Street. By 1829 he had become a member and fellow of the Massachusetts Medical Society. It would seem likely that as his practice and wealth grew, he would purchase the subject property to house both his family and his practice. The 1850 Federal Census records him as having real estate worth $10,000 and the 1839 Boston Directory lists him at 14 Winter Street. However, by 1857 he had moved his practice and family to 132 Tremont Street. It was probably shortly after this date that the property was redeveloped as the four-story brick commercial building that shows up on the 1874 map of Boston and which would remain in the family until the early 20th century.

The subject property would remain in the Jackson’s Corp.’s ownership through at least 1938. In 1925, the building was heavily damaged by a fire on the third floor. At some point after 1938 the Winter Realty Corp. obtained the property and would convey it to Louis J. Binda (year unknown). Binda in turn would convey it to the Beth Israel Hospital Corp. on May 1, 1947, subject to a 20-year lease from that date to Markson Brothers, a women’s and men’s clothing store with branches in Cambridge, Quincy, and Somerville at that time. The hospital, which likely had purchased the property solely as an investment, conveyed it on March 2, 1971, to Slak Shak Associates, who in turn sold it to the current owner, S. S. Partners LP, on May 22, 1991.

This property is not a protected landmark nor is it in a landmark district.