BOSTON - Tuesday, October 8, 2019 - In his annual speech to the Greater Boston Chamber of Commerce, Mayor Martin J. Walsh today laid out his Administration's progress over the last five years in key areas including housing, transportation and education, and issued a call to action to the business community to take what opportunities Boston's progress has brought, and leverage the City's economic success into lasting, positive change for all. With Mayor Walsh's leadership, Boston is a city that is leading the way on building affordable housing, investing in tools and training for its workforce, prioritizing climate resilience in planning and development, and leading with values of inclusion and equity. 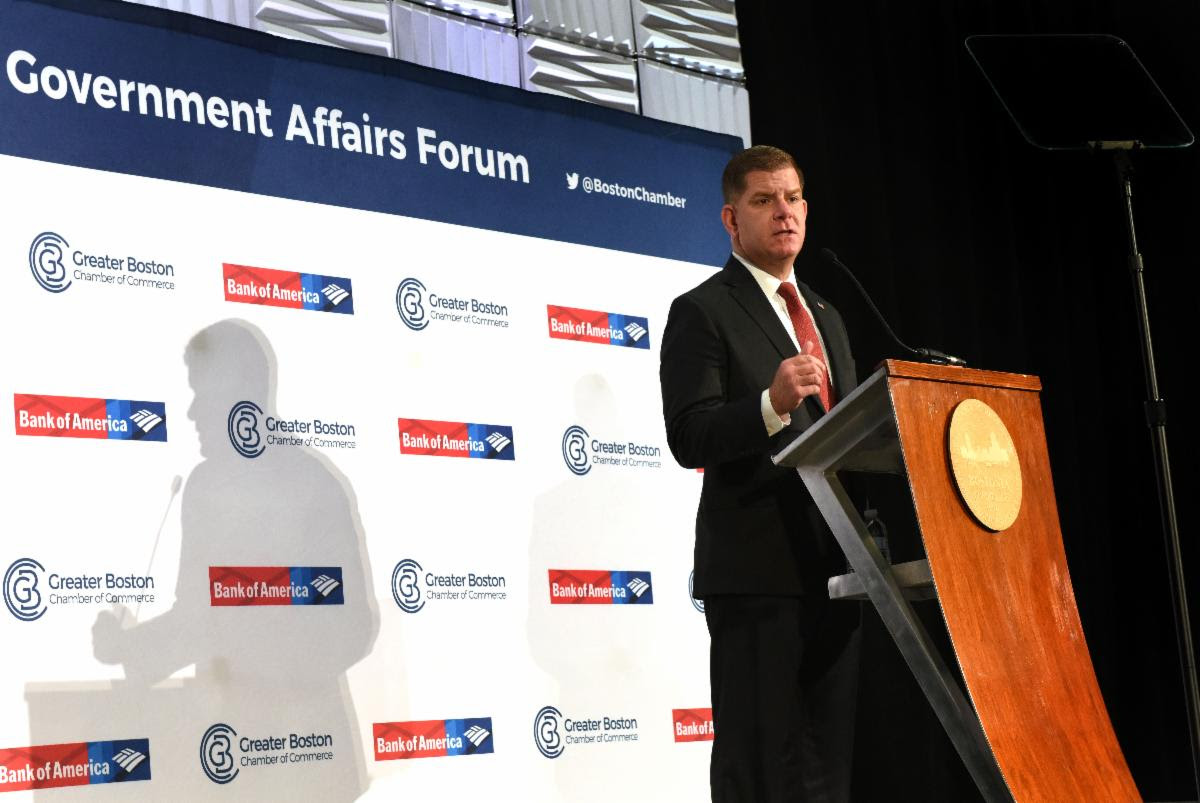 As the Walsh Administration has invested in its residents, Boston's economy has grown, adding 120,000 new jobs, with an unemployment rate under three percent, and new investments being made in Boston's housing stock, schools, parks, and libraries. With this year-over-year growth in mind, Mayor Walsh today challenged Boston's business community to step up as good corporate partners in helping address some of the toughest challenges the city faces, including the need for more affordable housing, safe and reliable public transportation, and high-quality education for all students.

"Boston is as strong as it's ever been, but if we're going to continue to thrive and meet our greatest challenges, then we've got more work to do. Today I come before you with an appeal to every industry, organization, and individual in a position of leadership in our city: to focus our energies, strengthen our partnerships, and combine our voices to meet our biggest shared challenges," said Mayor Walsh. "To keep our economy working, we must provide what working people need: in housing, in transit, at schools, and in jobs. We have to give every single person a place to live and a path toward their dreams. To do that, we need to be focused not just on the short term and the bottom line, but on the long term and greater good to build a strong middle class, an economy built to last, and a Boston that continues to lead in the 21st century."

In his speech, Mayor Walsh celebrated major transformations being made for the first time in a generation, including investing in the Boston Common and Franklin Park; building new schools focused specifically on STEM and arts education; building Boston's first new firehouse in 30 years; spearheading a redesign of City Hall Plaza; and earning perfect AAA bond ratings for six consecutive years, the first time that's been achieved in the city's history. Boston's work on racial equity and resilience has also brought attention to the city, and for the first time in nearly 40 years, the City of Boston will host the NAACP National Convention, welcoming members throughout the United States and the world who are the premier advocates for civil rights in their communities.

Mayor Walsh also announced that tomorrow he will travel to Copenhagen for the C40 World Mayors Summit discussing climate solutions with other leading cities committed to upholding the Paris Climate Agreement. As North American Co-Chair for C40's Steering Committee, Mayor Walsh will participate in a panel to share Boston's global leadership on preparing for rising sea levels and climate change. Earlier this morning, Mayor Walsh released an update to Boston's Climate Action Plan, accelerating action towards carbon neutrality and continuing Boston's ambitious goal to be a carbon free city by 2050.

In last year's speech to the Greater Boston Chamber of Commerce, Mayor Walsh introduced "Resilient Boston Harbor," a plan that lays out strategies along Boston's 47-mile shoreline that increases access and open space along the waterfront, while better protecting the city during a major flooding event. In just one year, the City opened Martin's Park along Fort Point Channel, started construction on the Langone-Puopolo Park in the North End, and moved forward with the redesign of Moakley Park in South Boston. Along with these upgrades to protect Boston's shoreline, in July of this year, the Administration proposed the city's first capital plan that dedicates 10 percent of all spending to resilience projects.

"We can't take the opportunity before us for granted, because as far as we've come, big challenges of success, like housing demand and transit capacity, remain," said Mayor Walsh. "These challenges, some national problems like inequality and the hollowing out of middle class, are threats to our economy. We have the opportunity now to address them by building on our success."

In his speech, Mayor Walsh focused on three cornerstones he called upon the business community to lead on: housing, transportation and education.

Since Mayor Walsh took office in 2014, the City of Boston has created over 31,000 new homes and has an additional 27,000 units in the pipeline, ahead of pace to meet its goal of 69,000 new homes by 2030. Twenty percent of those new homes are income-restricted units. Boston is currently are number one in the United States for income-restricted, affordable housing.

Boston's strategy is working. Rents have stabilized in some neighborhoods and we're on the way to creating 1,000 new homeowners. However, Boston needs the business community to ensure progress continues, and affordable housing does not remain out of reach for residents.

Mayor Walsh has called upon the business community to:

"The bottom line is, housing is not a commodity; it's a community," said Mayor Walsh. "It's where people build their lives. We have to be able to provide security and stability in our communities, and we have to be able to house our workforce. We also need owners and investors to take a step back and consider the human impacts of their actions. Profits can't come at this kind of cost. It's not a price and it's not a practice that we're going to accept in the City of Boston."

In addressing one of the most pressing challenges facing Boston and other municipalities, Mayor Walsh reaffirmed his commitment to fighting for a reliable, frequent and affordable public transportation system that meets today's needs and supports tomorrow's growth.

Together with input from residents across the city, the City has:

Under Mayor Walsh's leadership, the City has also put together its long-term transportation plan, Go Boston 2030, which focused on improving access, equity and reliability in transportation for all of Boston's residents.

"Recently, I sat with a group of business leaders--you understand the urgency," said Mayor Walsh. "We need your voices to communicate what's at stake for your workers, your businesses, and our economy. And we need your expertise to help develop solutions. Just as we've done in the City of Boston, we need to work together, as partners, on a comprehensive plan to address the statewide need for better transportation. And we need to make the hard decisions necessary to fund and implement that plan."

Mayor Walsh believes that a good, strong education is the best investment we can make in Boston's children and their collective future, and is proud that more Boston students than ever before are in high-quality schools. It's also why he has enacted the highest budget for Boston Public Schools every year since taking office, investing in the proven strategies for closing achievement and opportunity gaps. The City of Boston is committed to looking at the whole student and removing barriers to learning wherever we can find them, which means investing in programs like new kitchens to provide healthy food, providing MBTA passes to all Boston students grades 7-12, and offering free hygiene products for girls. In addition, the City has added nurses to every school, and has made available mental health professionals for students, and has support available for students experiencing homelessness.

Boston has made historic investments in its students and schools over the last five years, including:

However, Boston's efforts don't end with students graduating. Mayor Walsh's focus on ensuring students have every opportunity, from cradle to career, means he has called on businesses to join in partnership with the City, to ensure economic prosperity is felt by its students. In his speech, Mayor Walsh challenged companies to hire most residents, looking to companies like Natixis, Vertex and Autodesk that partner with students to improve their chances for success.

Mayor Walsh thanked the Speaker, Senate President, education committee chairs and the Boston delegation for the Student Opportunity Act, which has the key principles to meet the needs facing every district and every student.

"We have to show people from every neighborhood and walk of life that this great city we've built together wasn't built for someone else, it was built for them and everyone," said Mayor Walsh. "I'm asking Boston's employers to draw from the deep well of talent in our neighborhoods. I'm asking you to hire more Bostonians. Our residents are skilled, they are resilient, they are diverse, and they have a lived understanding of culture and community in today's America. You need people like them in your workplace, and you don't have to look far to find them."