The Cabinet-level position was created last year to embed equity and racial justice into all City planning and operations.

Mayor Kim Janey today announced that she has appointed Celina Barrios-Millner as Chief of Equity and Inclusion for the City of Boston, a Cabinet-level position created last year to embed equity and racial justice into all City planning and operations. Chief Barrios-Millner brings extensive background to this role, as she previously led the Equity and Inclusion Unit within the Mayor’s Office of Economic Development and was charged with implementing the Mayor’s Economic Inclusion and Equity Agenda. In this role, she also oversaw the City’s efforts to connect local residents, veterans, and people of color to economic opportunity through the Boston Resident Jobs Policy (BRJP) and the Supplier Diversity programs. 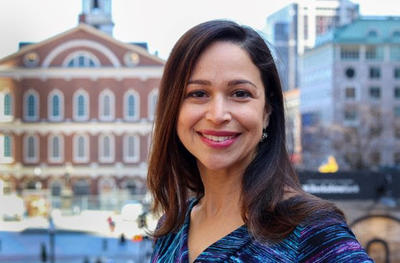 Most recently, Chief Barrios-Millner (pictured) spearheaded an Executive Order signed in February that was designed to support equitable procurement policies and create the framework to enact race- and gender- conscious procurement goals to address existing inequities. As part of the action taken in February, a $2 million Supplier Diversity Program was created to implement new initiatives that expand opportunities for minority- and women-owned businesses. Building on this announcement, Mayor Janey today announced key investments into staffing and programmatic needs as part of the Supplier Diversity Program.

“Celina has the experience and expertise to lead Boston’s Equity and Inclusion Cabinet with excellence, and has a proven track record of breaking down barriers where they exist and expanding opportunity for all,” said Mayor Janey. “I am confident that Celina will meet this moment with urgency to keep the important work of the Equity and Inclusion cabinet at the center of our recovery from the COVID-19 pandemic. I look forward to working with her in this new role.”

Under the leadership of Chief Barrios-Millner, the Office of Equity and Inclusion leads the Administration's efforts across departments to embed equity into all city work, and actively work to dismantle racism by putting an intentional focus on supporting communities of color and marginalized groups across all departments. The Cabinet is tasked with building equitable governmental structures to sustain this work. The Office supports cross-department collaborative functions that advance innovative equity and opportunity policies and practices, including the strategies outlined in Imagine Boston 2030. To do this work, the office utilizes and leverages the City's partnership and collaboration with community residents, nonprofit organizations and business leaders to promote equitable government policies and outcomes.

With the new role, Chief Barrios-Millner’s former Equity and Inclusion Unit for the Office of Economic Development will also move to the Equity and Inclusion cabinet. This will help the cabinet drive and enforce policy, to complement their advocacy in restructuring the city’s work through an equity lens.

“I am proud to serve the residents of Boston as Chief of Equity in this vital role at this critical time,” said Chief Celina Barrios-Millner. “I am committed to working with the incredible team at the Equity and Inclusion Cabinet to ensure we are taking a citywide, community-informed approach to equity. I’m excited to lead in leveraging city resources of city government to ensure access, inclusion, and prosperity.”

Chief Barrios-Millner brings over 20 years experience in social justice advocacy and equity-driven institutional change. Throughout her career, her efforts have been focused on community organizing, civic engagement and strategic policy development. Prior to joining the Mayor’s Office of Economic Development, Chief Barrios-Millner led the creation of the City of Boston’s Immigrant Advancement Agenda at the Mayor’s Office for Immigrant Advancement (MOIA). Through this, she provided strategic direction to departments to ensure that immigrant residents were at the forefront of policy and program design. Previously, she led Partnership Development for the State Office of Minority and Women Business Assistance (SOMWBA) to generate business opportunities and resources for certified woman- (WBE) and minority-owned businesses (MBE).

The Office of Equity and Inclusion has previously spearheaded a number of initiatives to expand access across the city, including projects such as the Boston Racial Equity Fund. The Fund's goal is to increase the safety, wellbeing, equity, and prosperity of the Black and Brown community, while advancing racial equity. In February, the Boston Racial Equity Fund joined efforts with the New Commonwealth Fund to collaborate on advancing racial equity and dismantling systemic racism in the City of Boston and Commonwealth of Massachusetts.

Additionally, since the Cabinet’s creation, the City of Boston established the Office of Police Accountability and Transparency to investigate complaints of police misconduct, ensure that the Boston Police Department's internal affairs review process is fair and thorough, and ensure an equity lens was incorporated to both existing and proposed policies and procedures. This was a result of the work from the Boston Police Reform Task Force, a group charged with reviewing a set of current Boston Police Department policies and procedures. Their review resulted in recommendations for action and reform, which were fully accepted by the City of Boston in October 2020.