The solar canopy at Boston Police Headquarters completes the first phase of the Renew Boston Trust initiative, which is estimated to save approximately $680,000 in its first year.

Mayor Martin J. Walsh today announced the completion of the first phase of Renew Boston Trust, the City of Boston’s initiative to invest in energy efficiency and renewable energy measures for municipal buildings. The first phase of the $45 million investment spans 14 City-owned buildings, including libraries, community centers, police and fire stations, and helps reduce energy use, save money, and reduce city-emitted greenhouse gases that contribute to climate change.

This work marks continued commitment by the City of Boston to lead by example and implement strategies outlined in the 2019 Climate Action Plan update to reduce greenhouse gas emissions and become carbon neutral by 2050.

“Climate change is one of the biggest challenges of our lifetimes, and the City of Boston must lead by example in our commitment to building healthier, sustainable, and more equitable communities,” said Mayor Walsh. “The Renew Boston Trust is a smart, forward-thinking program for the City of Boston, and allows us to reduce the greenhouse gas emissions that pollute our neighborhoods and further climate change.”

The first phase includes dozens of completed energy-saving projects at 14 City-owned buildings throughout Boston, which are estimated to save approximately $680,000 in the first year alone. Investments include efficient lighting and water fixtures, HVAC equipment replacements, building management systems to improve operations, and installation of solar panels. This first phase is projected to reduce municipal greenhouse gas emissions by one percent, and grow in impact over time, which improves air quality, creates healthier buildings, and reduces carbon emissions to get the city closer to achieving carbon neutrality by 2050.

“In Boston, buildings account for nearly 70 percent of the emissions that contribute to climate change. The Renew Boston Trust not only makes our buildings more comfortable for employees and visitors, but allows us to re-invest additional savings from these energy efficiency and renewable energy upgrades into resiliency measures across the city to build stronger and healthier neighborhoods across Boston,” said Chris Cook, Chief of Environment, Energy, and Open Space.

The first phase of Renew Boston Trust was completed with the installation of carports at the Boston Police Department Headquarters. On top of these carports are 707 solar modules that reduce the amount of power the building draws from the grid, produce about 242,000 kWh annually, and save $6,000 in its first year. Solar PV installations were also made at the BCYF Roslindale Community Center and the BCYF Tobin Community Center. Each building is guaranteed between $4,000-$6,000 in savings the first year, with more anticipated over the 20 year contract. 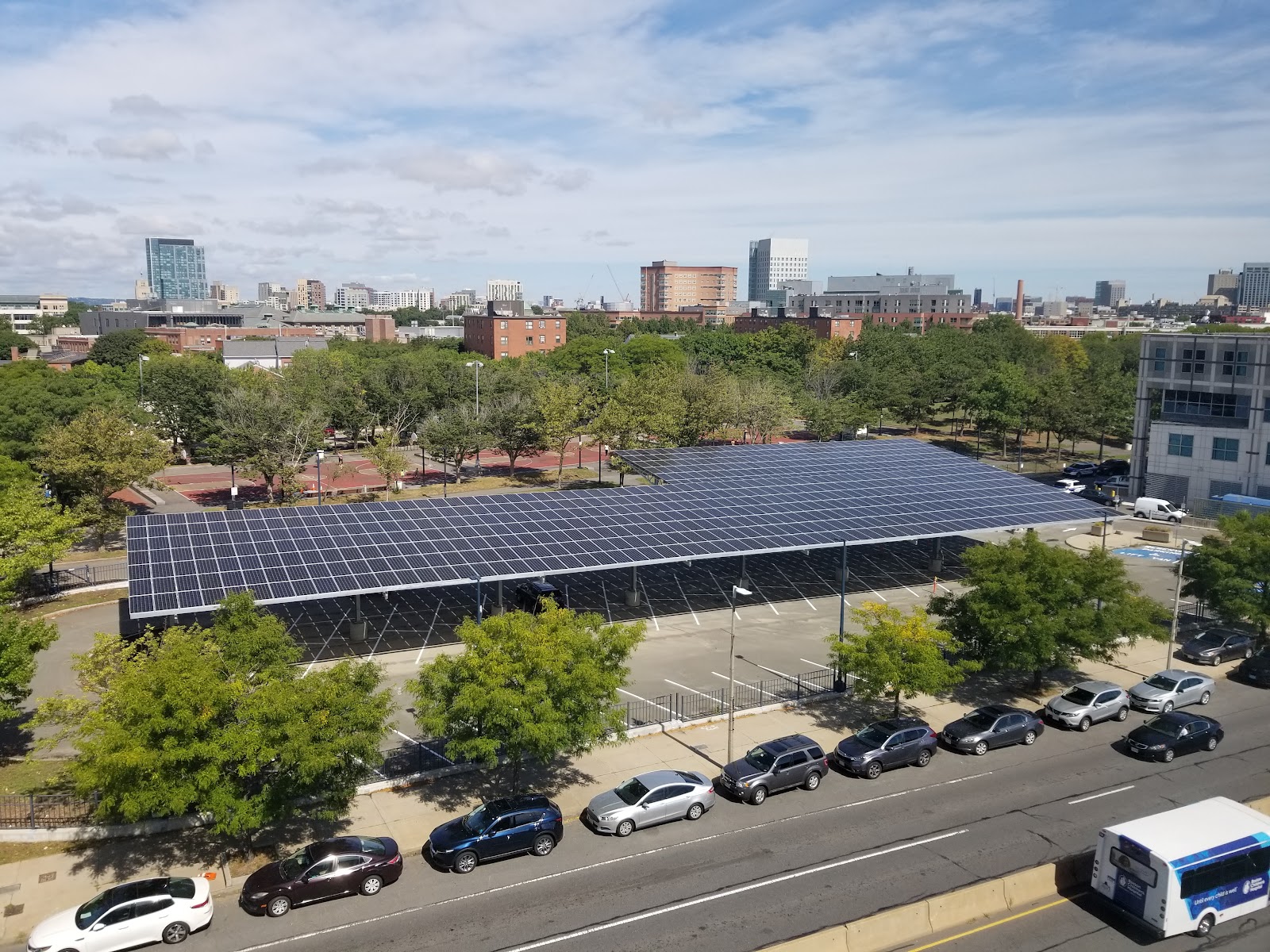 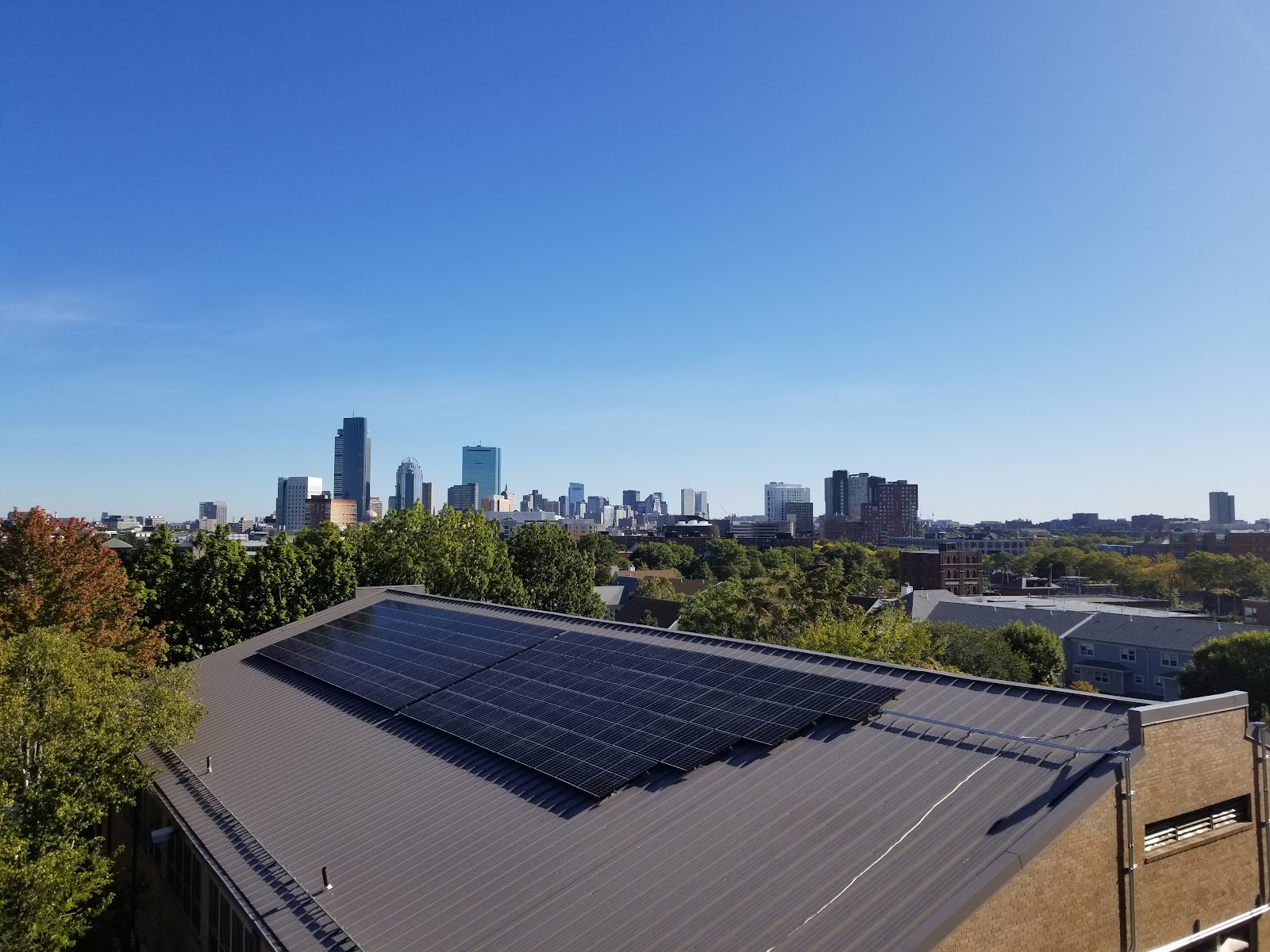 “By using a self-funded financing model with guaranteed savings, the Renew Boston Trust program saves the City money and helps us to achieve our climate goals,” said Emme Handy, Chief Financial Officer. “Generating $32 million in proceeds, the City issued its first series of green bonds in December to finance projects such as the first two phases of Renew Boston Trust. We are pleased that the sale of green bonds achieved a three basis point pricing differential, the largest and most definitive pricing benefit to date for municipal green bonds.”

Mayor Walsh formally announced his plans for Renew Boston Trust with an $11 million investment in the FY19 budget. The upgrades are made through an energy savings performance contract, a proven self-funded financing model that guarantees energy and cost savings. The savings within the City’s operating budget from more energy efficient buildings pays for the financing of the work. With additional savings, the City plans to re-invest in resiliency measures. The next phase of Renew Boston Trust is investing nearly $20 million of energy conservation measures across 31 city-owned buildings.

Projects have been completed at the following City of Boston buildings:

As indicated in the 2019 Climate Action Plan update, Boston’s roadmap for reaching its goals of achieving carbon neutrality by 2050 and preparing our infrastructure and communities for the impacts of climate change, the City of Boston has taken bold and necessary action to lead by example. On top of investing in our existing buildings and use of City assets like parking lots to deploy renewable energy, in 2019 Mayor Walsh signed an executive order requiring all new municipal buildings (schools, libraries, community centers) will target a net-zero standard. In order to provide high quality, safe, and cleaner affordable housing to our most vulnerable residents, the City of Boston offered $30 million to support the creation of new affordable housing built to net-zero standards. Climate Ready Boston is simultaneously strengthening Boston’s climate change resilience and adaptation with near- and long-term planning through neighborhood-level engagement and solutions. For more information on how Boston is actively preparing for the impacts of climate change and advancing the vision of a resilient city, visit boston.gov/environment.