Significant progress has been made in the last two years in planning for the comprehensive redesign of the City Hall campus.

Mayor Martin J. Walsh today announced the significant progress that has been made in the last two years in planning for the comprehensive redesign of the City Hall campus, and next steps in moving from planning towards implementation, as included in the final report of "Rethink City Hall: Boston City Hall and Plaza Study." As initial steps following the release of the final report, the City of Boston has selected Skanska as the Owner's Project Manager and is in the final stages of contract negotiations with Sasaki Architects for the Design Firm to move this project forward towards the next phase of design and construction. 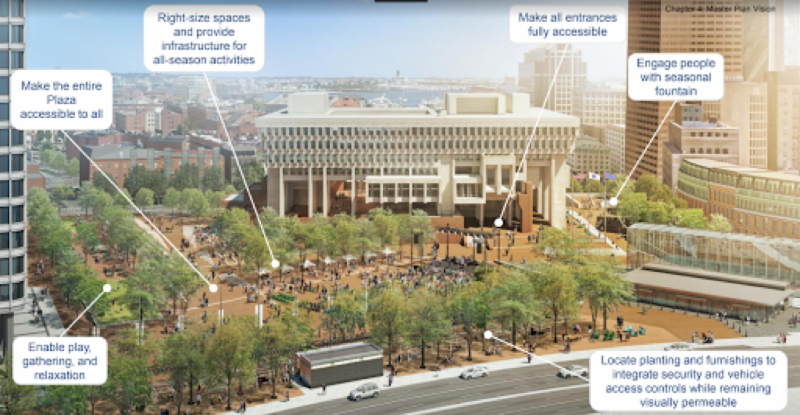 "As we prepare to celebrate Boston City Hall's 50th anniversary this summer, we are recommitting to our vision and moving forward with our plans to make City Hall the civic heart of our city," said Mayor Walsh. "These improvements are not only necessary for the long-term viability of City Hall and the plaza, but are an important part of our plan to make these spaces a destination. I am proud of the significant progress we have made over the last several years towards this goal, and am excited to see our vision for these spaces come to life, which will serve us well for years to come."

The Plaza redesign will be driven by lessons learned through the City's partnership with the Boston Garden Development Corporation, as well as, through discussions with other event organizers that have used the space extensively in the past. The successful activation of Boston Seasons on City Hall Plaza, including Boston Winter and The Patios, has shown the potential for activating the space, while also underscoring the need for infrastructure improvements and system upgrades to successfully sustain events of all sizes. This includes work to improve accessibility and access to power, water and data to ensure long-term success and profitability for the city, event organizers and vendors.

As a next step, the City will conduct a detailed survey this summer of plaza conditions, both above and below ground, combined with destructive infrastructure testing this fall, to prepare for construction that is expected to begin in 2019. While the resulting work will be contained to the North side of the plaza, it will impact large scale events on the plaza. The City will work with event organizers to alter their site plans, or provide options to relocate their events during this phase.

The City is currently working with the Boston Garden Development Corporation on modifications to plans for Boston Seasons, which includes Boston Winter and The Patios, as part of their three year contract with the city to activate City Hall Plaza. The Patios, a local gathering spot with custom patio areas and a main pavilion, will remain open through the Fall of 2018, and Boston Winter will not operate this winter, as the city commences extensive destructive testing and prepares for construction in 2019.

"We are proud of our on-going efforts and accomplishments in reimagining City Hall Plaza and making it a vibrant destination in collaboration with the City," said Amy Latimer, president of Boston Garden Development Corp.  "We are supportive of the City's plans and Mayor Walsh's long-term vision for this unique space. We will miss the opportunity to bring Boston Winter back for a third time, but are excited to continue The Patios."

The efforts to make City services more accessible, welcoming and efficient while ensuring the long-term viability of the plaza for activations build on Mayor Walsh's commitment to the future success of these valuable public amenities. As the City prepares for construction to begin on the plaza, significant renovations have been made in the interim.

In July 2017, Mayor Walsh unveiled significant improvements made to City Hall's third floor lobby, the main entrance to City Hall, which included a new welcome desk, security enhancements, a coffee shop, an accessible and interactive self-service information kiosk capable of multiple language translations, new art installations and the replacement of interior lighting with energy-efficient LED lights. Prior to that, the City welcomed a local, minority-owned coffee shop, Recreo, to Boston City Hall, a location they have held successfully for two years. In addition, the Mayor in 2016 unveiled Boston City Hall's architectural exterior lighting, a permanent fixture to highlight and enhance the building's original design while livening up City Hall Plaza with lights and increasing public safety. Under the leadership of Mayor Walsh, the City Council Chambers and women's restroom on the first floor of City Hall were renovated in 2017 to become fully ADA-compliant and accessible to all.  In addition, construction is nearing completion to open-closed windows at the mezzanine level as a pilot project to allow for easier access by members of the public to obtain moving permits. This pilot will inform future projects intended to provide more thoughtful transactional area improvements that will provide for more clarity to the public when doing business with the City.

These efforts all complement and follow the direction outlined in the final report of "Rethink City Hall: Boston City Hall and Plaza Study, which will serve as a roadmap for operational and design improvements to lead the transformation of City Hall and the plaza into a space that welcomes visitors, works for constituents and inspires pride in its residents. For more information, please visit RethinkCityHall.org.