The day marks a remembrance of the victims of the Sandy Hook Elementary School shooting, which happened six years ago on December 14.

Mayor Martin J. Walsh and Boston Police Commissioner William Gross, in collaboration with physicians and medical professionals, today announced a coordinated gun buyback day will take place in six locations across Boston on Saturday, December 15 from 10 a.m. - 4 p.m. The day marks a remembrance of the victims of the Sandy Hook Elementary School shooting, which happened six years ago on December 14. The "Piece for Peace" program aims to bring attention to the devastating toll that unneeded and unsecured guns can have on individuals and the public at large, and provides the opportunity for people to turn in unwanted guns and ammunition, no questions asked. 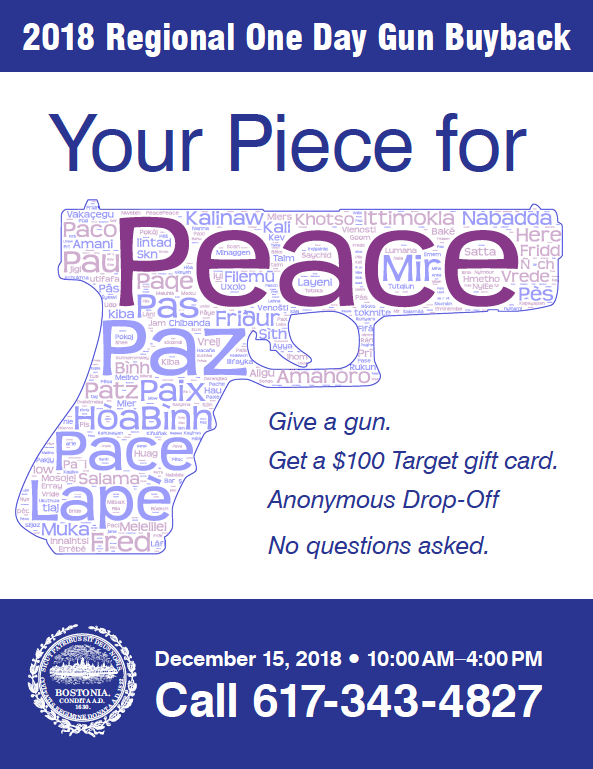 "Here in Boston, we know that even one life lost to gun violence is one too many," said Mayor Walsh. "The Boston Police Department is committed to getting guns off our streets: whether it's through the creation of the gun buyback program, recovering firearms, engaging with responsible gun owners, or tracing the path of illegal guns, we are working with the community everyday to make Boston a safer place for everyone."

Boston Police Department's gun buyback program, "Piece for Peace," is a proactive campaign to take guns off Boston's streets organized in collaboration with Mass General Hospital for Children and the Massachusetts General Physicians Organization. The buyback program asks city residents to turn-in guns at designated drop-off locations citywide in return for a $100 Target gift card. The "no questions asked" program allows individuals to anonymously dispose of firearms without fear of charges for illegal possession when turning in the weapon. For locations and information on the Boston Police Department's gun buyback efforts this weekend, please visit bpdnews.com.

"This One Day Buy Back is a unique event in that it strengthens the bridge between the city, public safety, and the health community around gun violence. Street violence and gun suicides are issues that touch all facets of the community and are a shared responsibility," said Commissioner Gross. "By participating in this regional buy back, we provide an opportunity for family members to get guns out of their houses, and off the streets, with no questions asked. We are all playing an important role in this fight against gun violence.  I've said it before, but one gun off the street is one gun out of the hands of a kid in our community and possibly one life saved."

Medical professionals have joined this initiative in an effort to decrease youth violence and take guns off the streets by raising funds within their local healthcare organizations, and hosting buyback days throughout Massachusetts.

"As I pediatric trauma surgeon, I often see the deadly effects of gun access and and the toll it takes on victims, their families and those who treat them," says Peter Masiakos, director of pediatric trauma services at MassGeneral Hospital for Children and co-founder of the MGH Gun Violence Prevention Coalition. "Working together, physicians and political leaders have a responsibility to address the public health crisis that is gun violence. This gun buyback that is made possible by the the forward thinking actions of the Boston Police Department and Mayor Walsh is an opportunity to safely rid homes and streets on unwanted weapons. If just one life is spared; whether it is by preventing a suicide or or an unintentional shooting that happens when a child finds an unsecured gun in a closet, this event will have been successful."

Since the beginning of the program in 2014, the Boston Police Department has collected 601 guns that have been turned in through gun buybacks facilitated through the Piece for Peace program. So far in 2018, the BPD has confiscated over 645 illegal firearms and hopes that Boston city residents will take advantage of this one-day program to increase that total, and in turn, increase the safety of our city.