In 2021, the Boston City Council approved a resolution to rename the athletic fields at Millennium Park after former Mayor Menino who served as Boston’s mayor for 20 years and passed away in October 2014, following a battle with cancer. In addition, the playground was named in memory of former Boston City Council staff director and longtime Menino aide Alice Hennessey of West Roxbury.

The park opened back in December of 2020 and includes conservation land, walking trails, sports fields, and a playground. Construction began in 1994 to reclaim the former Gardner Street Landfill as a park using land excavated in the Big Dig. The new park was officially opened on December 7, 2000, by Mayor Menino with Hennessey playing an active role in the project.

Accompanied by her daughter, Susan, and son Tom Jr., Angela Menino spoke of having a front row seat as the park was developed.

“My husband and our great friend, Alice Hennessey, led the way for the spectacular transformation of this once literal dump. I remember often seeing them both talking loudly and directly with each other on how and what needed to happen next to secure the dirt from the Big Dig necessary to cap this site and create this new green space for our community. It took strong vocal leaders with creative ideas to capture the full benefit from that historic project — some in our city thought the dirt was for sale – but Tommy knew that it was the people’s dirt and should be used to the benefit of not just those in downtown but also those who live and raise families in our neighborhoods.”

Hennessey’s son, Sean, also spoke at the event and noted the historic progress that has taken place in Boston since the park was created.

“Alice would be humbled by this honor and thrilled that Boston has finally elected a woman Mayor to lead our city,” he said.  “Especially a Mayor who shares her lifelong passion to provide safe and inclusive parks, playgrounds and open spaces where kids from all of Boston's neighborhoods can get fresh air and sunshine, play on the swings, fly a kite or play soccer, and see bluebirds, hawks, deer, and even beavers all within the city limits. It is remarkable and my family and I are profoundly grateful and somewhat awestruck by this tribute.”

Park features include more than 25 acres of multi-use sports fields, parking, six miles of walking, jogging, and bike pathways, nature trails, and the playground. The park is especially popular with bird watchers due to the restoration of natural habitats for birds and animals with naturalized slopes, native grasses, and plantings. It is also popular with paddlers who have direct access to the Charles River thanks to the canoe and kayak launch.

The Boston Parks and Recreation Department is currently beginning construction on improvements to the playground, pathways, and finalizing a restroom planning study.

In her closing remarks, Mrs. Menino spoke of the park users taking advantage of all Millennium has to offer.

“Tommy would have loved this day with all of the families and children playing in this wonderful park created by strong leaders with a vision for this city that always kept people at the center of their work,” she said. “When it was done he enjoyed asking Alice ‘what did you see up there today?’ And she would rattle off the birds and other wildlife that had made their way back to our city here at Millennium Park. Tommy and Alice, his partner in progress, drove an idea into a plan that today continues to offer all people of this city the beauty of nature, fresh air and grass for acres that they can enjoy today and for generations to come.” 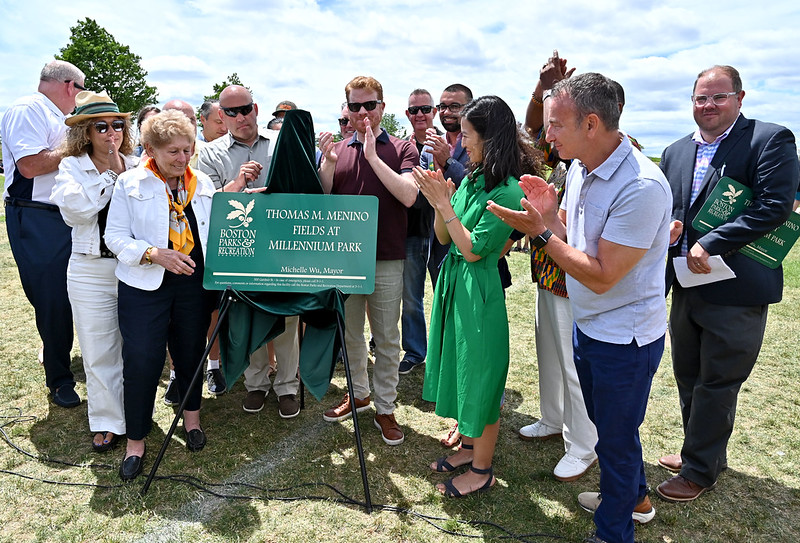 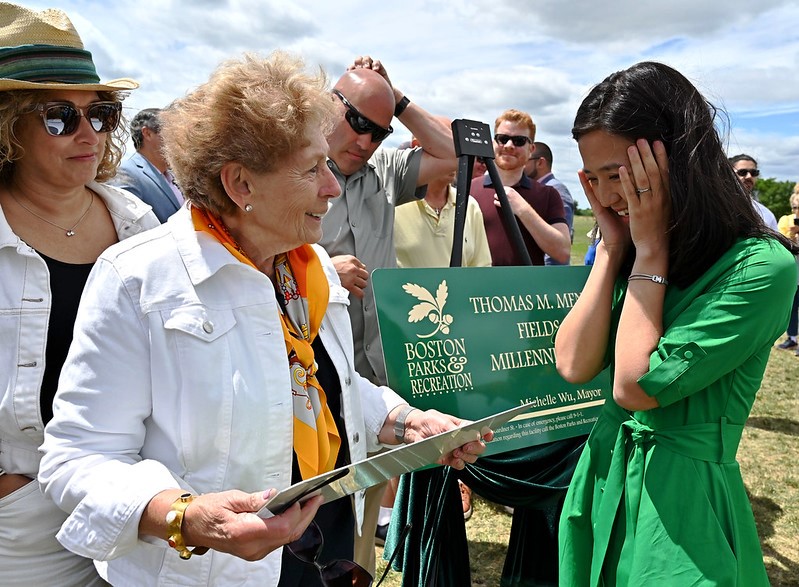 Angela Menino and Mayor Michelle Wu share a light moment at the June 18 ceremony naming the athletic fields at Millennium Park in honor of Tom Menino and the playground in honor of Alice Hennessey.