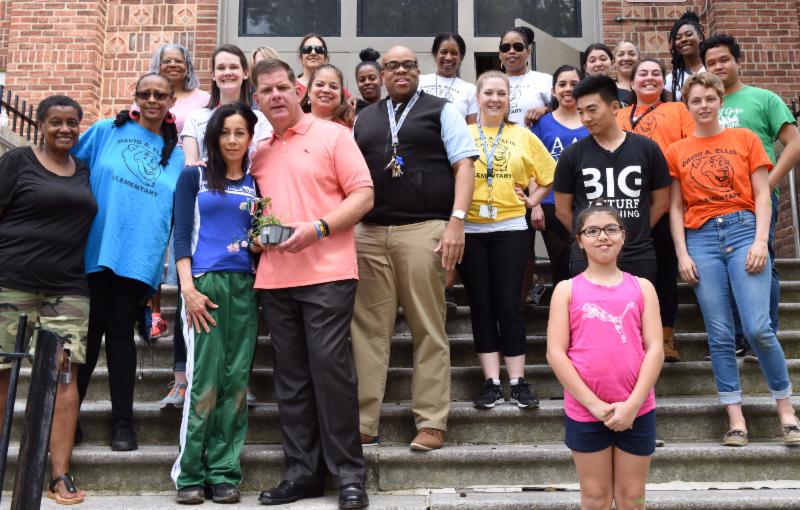 The Ellis School selection was awarded through a City of Boston request for funding to implement a comprehensive traffic calming project in the area. The Ellis School community, as well as the Roxbury Slow Streets-Safe Schools Coalition, has worked closely with the City of Boston to address safety concerns at this location and to plan upcoming improvements. Construction funds will be available starting fall 2021.

"I'm delighted that upgrades will soon be made to significantly improve safety for students and their families who walk and ride bikes to the Ellis Elementary School each day," said Mayor Walsh. "Boston is committed to ensuring all students can get to school safely and securely, and I look forward to this grant improving the experiences of all at the Ellis Elementary School."

The City of Boston's estimated $980,000 traffic calming project will use a variety of tools to slow vehicle speeds, provide safer crossings, and expand Boston's growing bike network near Ellis Elementary. The Safe Routes to School grant will fund a comprehensive suite of traffic calming interventions along Walnut Avenue, Humboldt Avenue, and several side streets.

MassDOT will work with City agencies on the project's design and construction. This effort is a continuation of rapid-response safety improvements completed in 2018 as part of Vision Zero Boston's Focus on Schools initiative, which resulted in pedestrian safety improvements along Walnut Avenue in response to speeding concerns.

"In the Boston Public Schools, there is nothing more important than the safety of our students," said BPS Interim Superintendent Laura Perille. "This collaboration with MassDOT will help provide a safer environment for our students as they arrive and leave school everyday."

"Boston's Transportation and Public Works Departments are committed to Vision Zero and to working to ensure the safety of everyone who travels on our roadways," said Chris Osgood, Boston's Chief of Streets. "I'd like to thank the Ellis School community, the Roxbury Slow Streets-Safe Schools Coalition, and the Garrison Trotter, Sugar Hill, and Hutchings Street Neighborhood Associations for partnering with Boston's Transportation, Public Works and School Departments, as well as the Boston Public Health Commission, on this effort. I'd also like to thank MassDOT for their support of the City's application."

In partnership with the Boston Public Health Commission, Boston Public Schools launched Safe Routes to School Boston in 2015, and Ellis Elementary has been participating in the program since its inception. Students receive annual bicycle and pedestrian safety education and participate in multiple Walk to School Days each year. More than one-third of Ellis Elementary students already walk or bike to school and nearly 60 percent of students live within walking distance of the school. Safe Routes to School Boston, a citywide effort to make walking or biking to school safe, convenient and fun.

Safe Routes to Schools Boston is funded in part by the Bloomberg Philanthropies Partnership for Healthy Cities, a global network of cities committed to saving lives by preventing noncommunicable diseases (NCDs) and injuries.

More information on this program is available at: https://www.bostonpublicschools.org/saferoutes.