Congresswoman-Elect Ayanna Pressley, the City Council will miss you!

This week’s Council meeting ended on an emotional note, as Congresswoman-Elect Ayanna Pressley bid adieu to the Boston City Council.

The first woman of color to serve on the Boston City Council, she will now transition to the 7th Congressional District, becoming the first Black woman to represent Massachusetts in Congress.

Congresswoman-Elect Pressley served on the City Council for nearly a decade, and, as her colleague Councilor Edwards noted, has broken through glass ceilings. Remembering the lead-up to her first election, Pressley recalled struggling with the thought of running for City Councilor At-Large, and it wasn’t until she realized how many young girls needed her to fight for them, that she decided to run to for the seat. 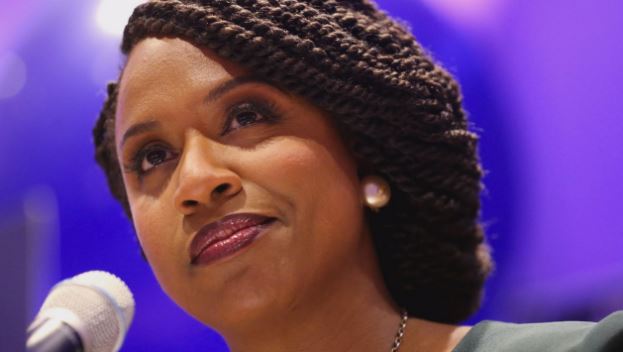 Holding back tears she said, “I wanted to fight for girls, not be their voice, but to lift up their voices, their stories, their struggles, and their ideas to create room and space and dignity for them at the policy table and in committee hearings. I made a vow to myself to listen and to value their voices and lived experiences, to push and to demand more from government, to develop gender specific and responsive programming and policies and protocols, and I made the decision to run for an at-large Boston City Council seat to do exactly that.”

She followed up saying, “Admittedly, many, in public and private, offered that I wasn't ready, I didn’t know enough, I wasn’t from here and that saving girls wasn’t the job of a Boston City Councilor, but rather a mission statement for a non-profit. And we proved them wrong.”

Fellow Council members offered her praise, support, and well wishes as they said their goodbyes.

Council President Campbell said, “I have a grown, as a human being and as a Councilor, because of your leadership. It is not lost on me that you paved the way for each and every one of us to be here. I appreciate you; I thank you for your service.”

Before reminiscing on how he met Pressley and how they became friends, Councilor O’Malley said, “You have given so much to this City, to this Commonwealth, and now to this Country.”

Councilor Tim McCarthy thanked Pressley for representing Boston and reflected on the history of firsts on the Council during her tenure. He expressed excitement that she would now be the first Boston City Councilor to go to Congress. “You are now my Congresswoman and I’m proud to say that.”

Councilor Frank Baker showed his appreciation for Pressley’s partnership on different issues in Dorchester, and reminded her to continue doing the work she’s been doing, hold her head up high and just be her.

Councilor Essaibi-George continued the teasing, pointing at Ocasio-Cortez and Tlaib saying, “I don’t like them. Watching all this on Twitter, and these girl photoshoots, thinking they have your back - no! We have your back!” She continued with, “We got to know each other and we developed this wonderful bond and this wonderful friendship. It is the greatest gift you have given me.”

Councilor Edwards followed her leading ladies with, “The few moments where I think about the great ones or the ones who set legacy, I know that they are called many many names. You’re officially Councilor Pressley, you are officially Congresswoman-Elect Pressley, you go by A.P for a lot of folks, for me - you are the great destroyer of glass ceilings. You are the one that says, ‘Why not us?’ everywhere you go, and because of you I am, Kim is, Andrea is, Michelle is, this Body is - a better, more perfect body.”

Councilor Flynn said, “We are proud of her. Proud of her legacy in supporting people that don’t have a voice in government or in society - the poor, the homeless, the immigrant community and the hungry. I’m proud to call Councilor Pressley a friend. I know she will fight for all the residents of the districts and Commonwealth everyday. We could not have a better Congresswoman.”

Causing much laughter in the Council Chamber, Councilor Zakim said, “Allow me to rise to be the first one to say I am thrilled that Councilor Pressley is leaving the Boston City Council and going to D.C and I will tell you why. For the first time in the five years that I’ve been on the City Council, I finally have a chance to be my wife’s favorite City Councilor.” He described Pressley as a trailblazer, advocate, champion, and as courageous, bold, fearless, gracious, generous, and persistent.

Gesturing to the photo of her mother that Pressley has brought with her to every Council session, Councilor Flaherty said, “We know how close you were to your mom and know that you continue to draw on her strength. The first person you will think of when you get sworn in will be your mom and her influence on you. Continue to do what you do, continue to advocate to the best of your ability, and keep remembering and listening to your mom and bring your mom to D.C.”

Councilor Wu, “I am one of hundreds if not thousands of women, young people, candidates to [walk] in your footsteps, that you have opened the door for. I would not be sitting in this seat without your courage and conviction over your entire career.”

Congresswoman-Elect Pressley closed her farewell speech paraphrasing an affirmation that she revisits daily, from "The President’s Devotionals: The Daily Readings That Inspired President Obama," entitled "A Gentle Battle."

Looking to each of her fellow Councilors, she closed, “I hope that all of you will continue winning that gentle battle, because we need you. Thank you for the honor of serving with you.”