In the first part of our two-part series on the role of community in Boston’s neighborhoods, we explored how community members work together to transform spaces like buildings and City blocks into vibrant communities with rich histories. In this second part, we look at clubs and organizations in Boston’s neighborhoods that create welcoming environments where community members develop friendships, take part in local culture, and form community ties.

Social clubs in neighborhoods encourage residents to become vital members of the community. Through a club’s community-centered events and meetings, residents actively engage with friends, neighbors, and the wider community in new ways.

Dorchester resident Irene Robinson, who grew up in Cambridge before moving to Boston in 1927, recalls stories her mother Ella Hartan told her about the Thursday Evening Club, a cultural club in the Black community. Both Irene’s mother and father were members of the club.

Irene details how her parents were able to meet famous musicians such as Marian Anderson and Roland Hayes (read Roland’s oral history!) through their involvement with the club, and how those relationships lasted over time.

Irene also discusses the impact the club had on the Black community in Boston and the prominent community members who were a part of the club. 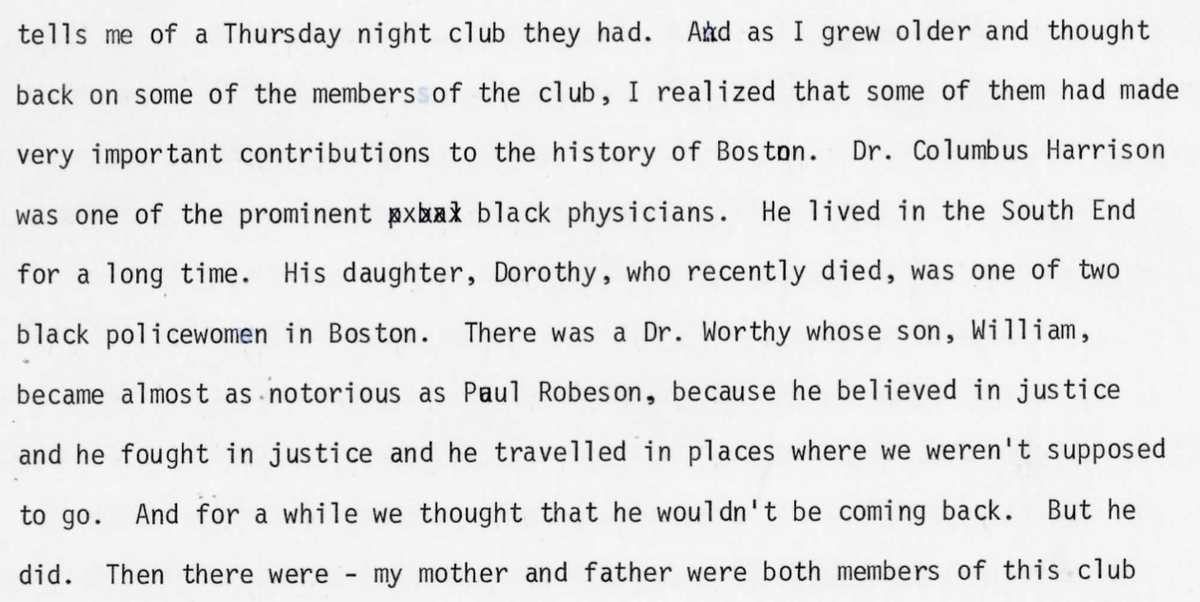 Community-centered events give residents access to a variety of cultural activities. Geneva Stewart, who came to Boston with her family at three months old, describes her time in the Etude Club, a musical club in the Roxbury community that existed for more than 70 years!

Geneva discusses the relationship she and the club had with a particular senior living home in the neighborhood, and the events and education they were able to provide each month. Through this relationship, the club created relationships built on trust, reputation, and the idea that community can form anywhere. 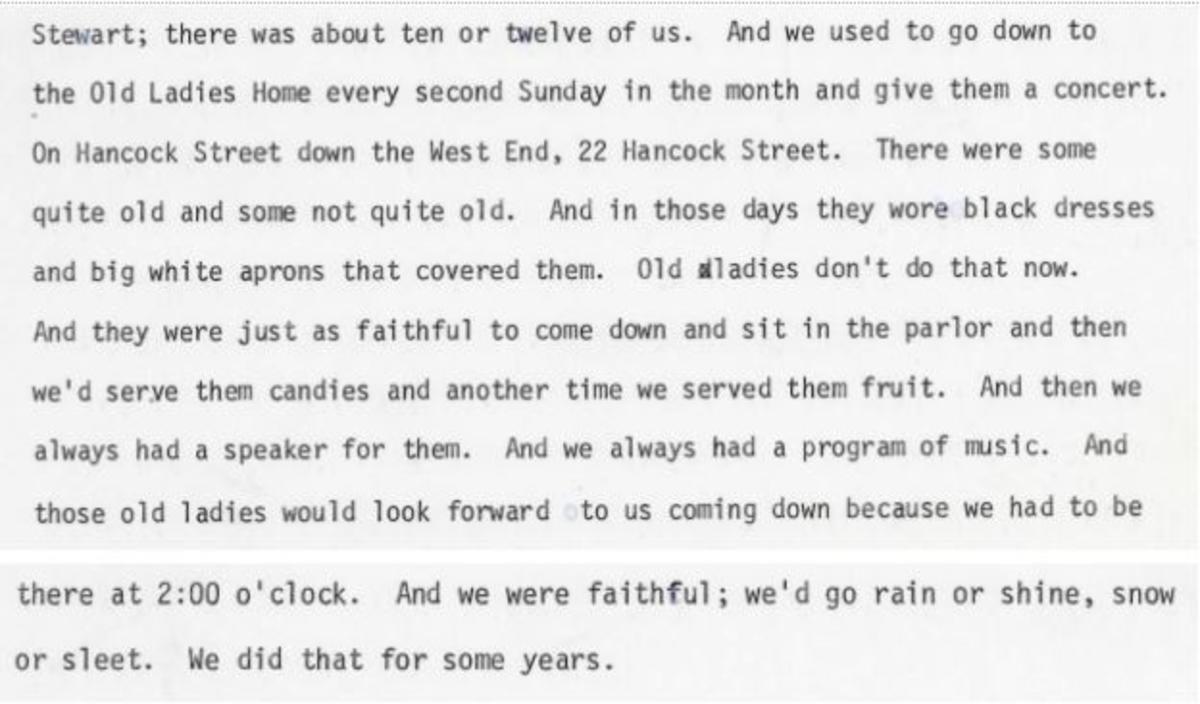 Social clubs can be an important voice in neighborhood and community decisions. Alice Woodmall describes the successful effort by the Jamaica Plain Tuesday Club, in particular dance teacher Rita Souther, to purchase the historic Loring Greenough House in order to preserve it. Now a part of the National Register of Historic Places, the Loring Greenough House has become a cultural center and its rich community history has been physically preserved, thanks to the club. 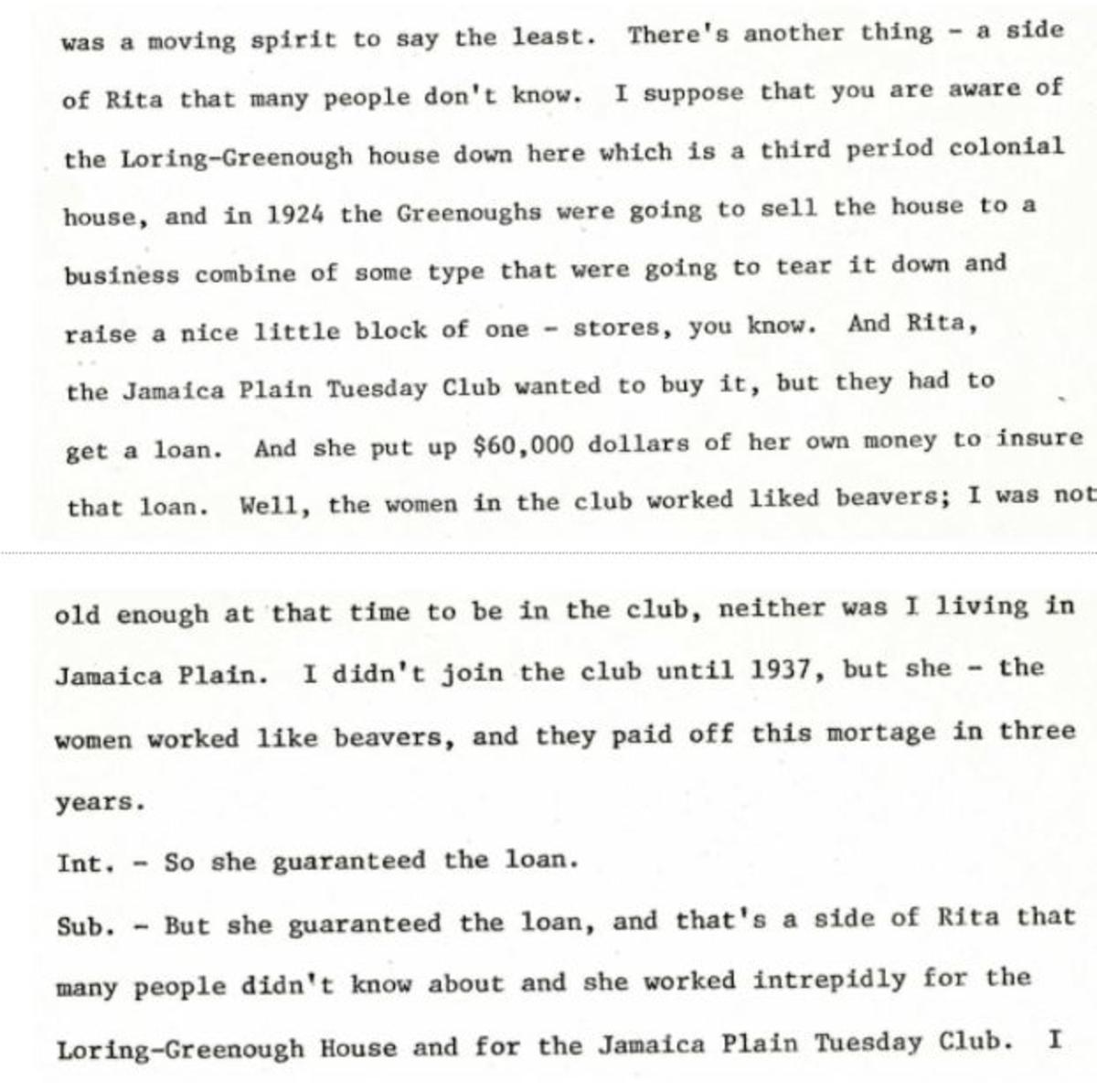 Residents often join neighborhood organizations to advocate for their fellow community members, which helps to establish common ground. Often in these organizations, strength comes in numbers.  John Madden, who moved to Dorchester at age 13 from Roxbury, describes the history of community organizing in Dorchester as well as the eventual 1966 formation of the Dorchester United Neighborhood Associations (DUNA). 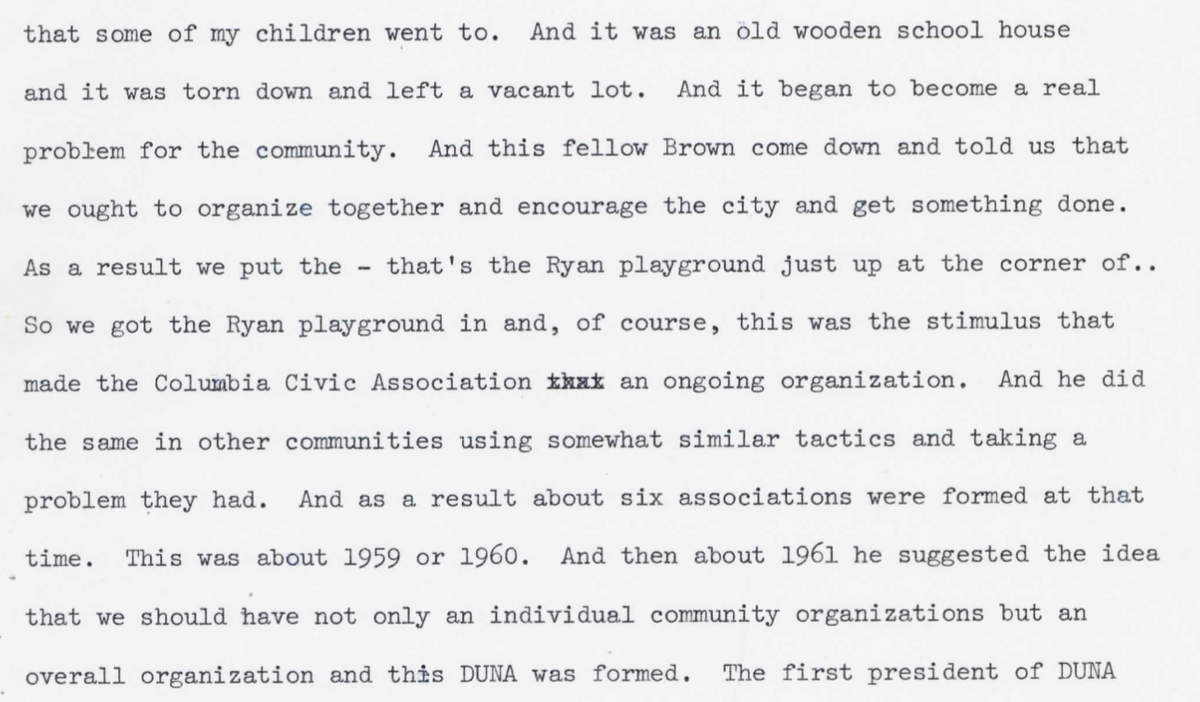 John discusses DUNA’s role in organizing and inspiring smaller community groups, creating a space where a variety of voices were heard and supported. 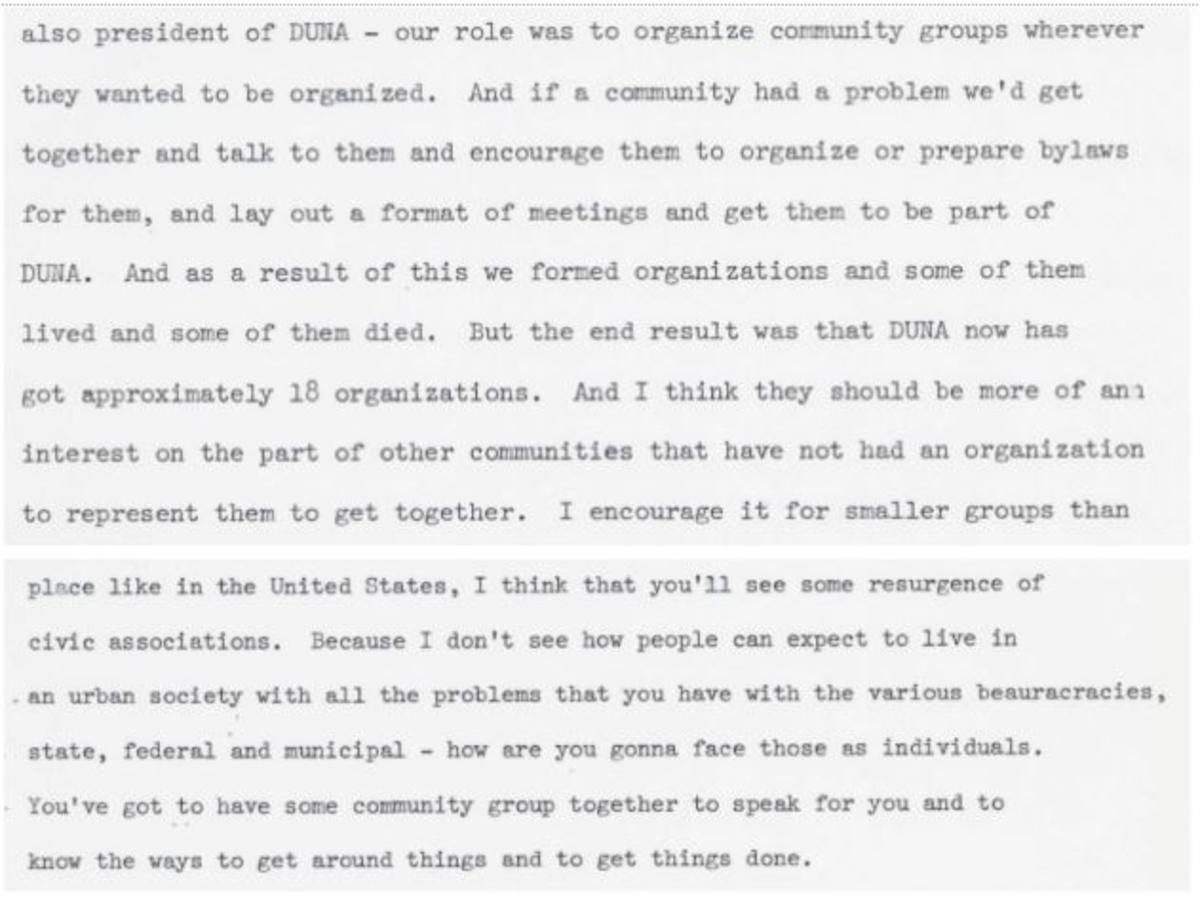 Many community organizations in Boston’s neighborhoods realize the benefit that after-school, weekend, and summer programs provide to children and young adults. These organizations actively involve young people in their community, providing them with a sense of direction and a voice. The Honorable Joseph V. Ferrino discusses his time spent at East Boston’s Trinity Neighborhood House. The building, now part of the National Register of Historic Places, began operation as a community-based organization in 1917. Joseph notes that programs offered by the House had a positive effect on his childhood and helped inform the choices he made as an adult. 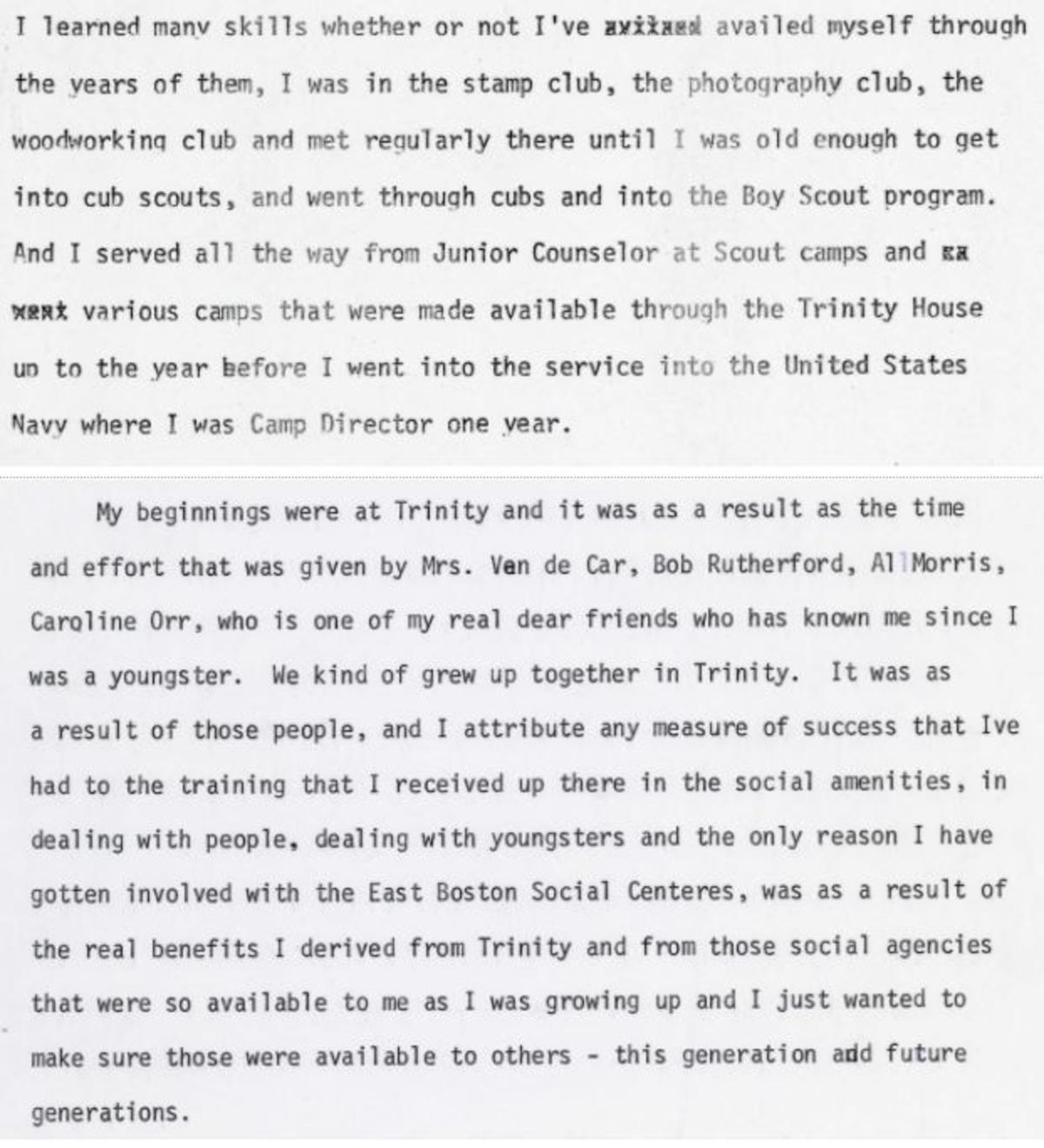 In a similar manner, Jamaica Plain resident Jack Doherty created spaces in which children and teenagers could make their voices heard. Jack discusses the importance of listening to what the younger generation has to say and how children and adults can learn from one another. Jack notes several programs which have been successful in their goal to give children a voice, proving that pride in your community can start at any age. 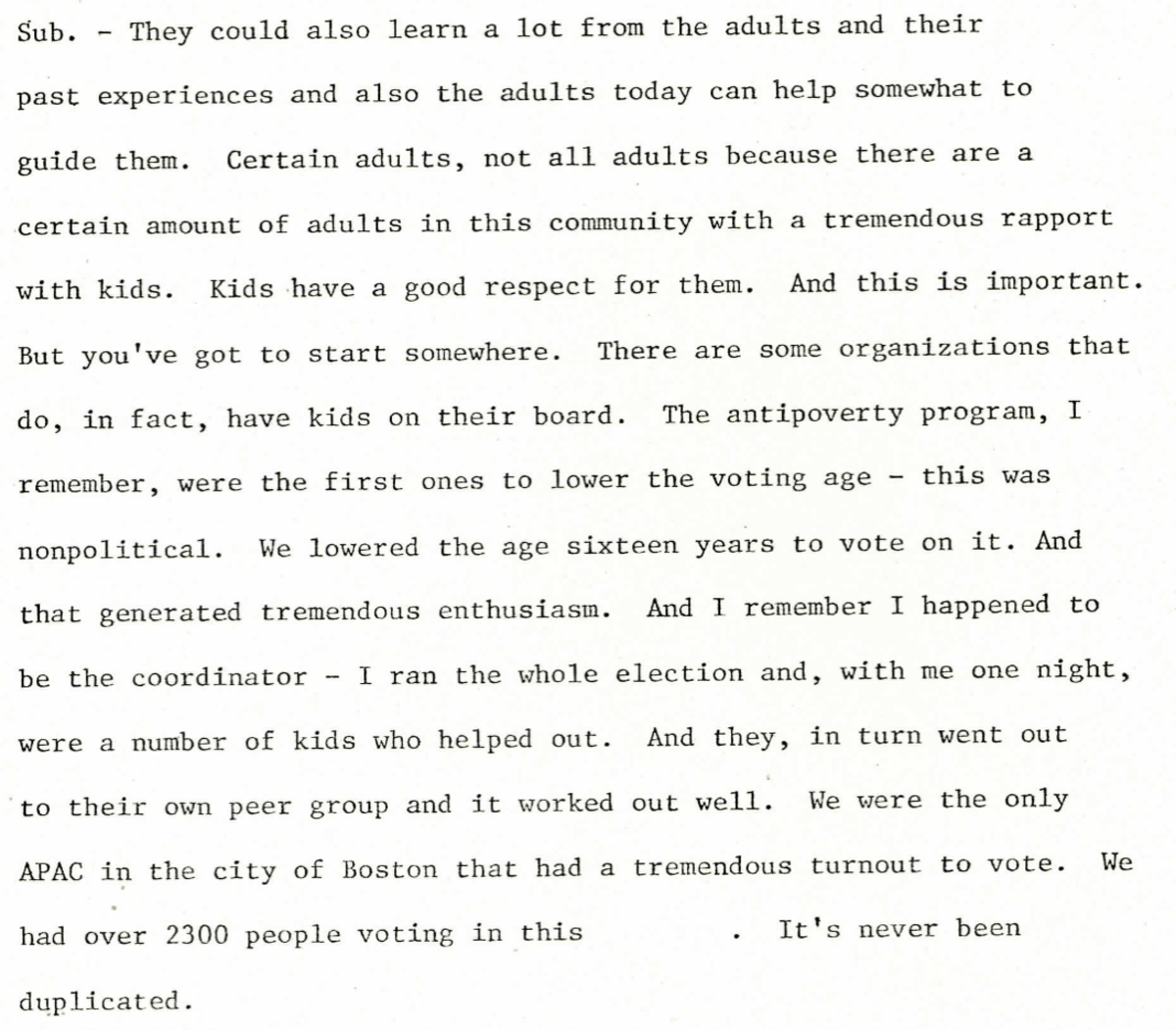 Neighborhood clubs and organizations play an essential role in the everyday lives of Bostonians. By understanding the needs of the community, these spaces provide ways in which residents meet and form friendships, strengthening community ties and support. Boston’s clubs and organizations serve as a consistent home base for residents and are a vital part of a neighborhood’s culture and history .