In the first of a two-part series about the role of community in Boston’s neighborhoods, we look at how bonds and history are created between neighbors, and how community members ensure that their voices are heard on important community issues.

Neighborhood bonds extend across spaces helping individuals create a community within a given town, street, or building. In these settings, neighbors organically take action to create a welcoming space. Gabe Piemonte, a first generation resident of the North End who grew up on Foster Street, describes why residents choose to live in Boston’s oldest residential neighborhood. 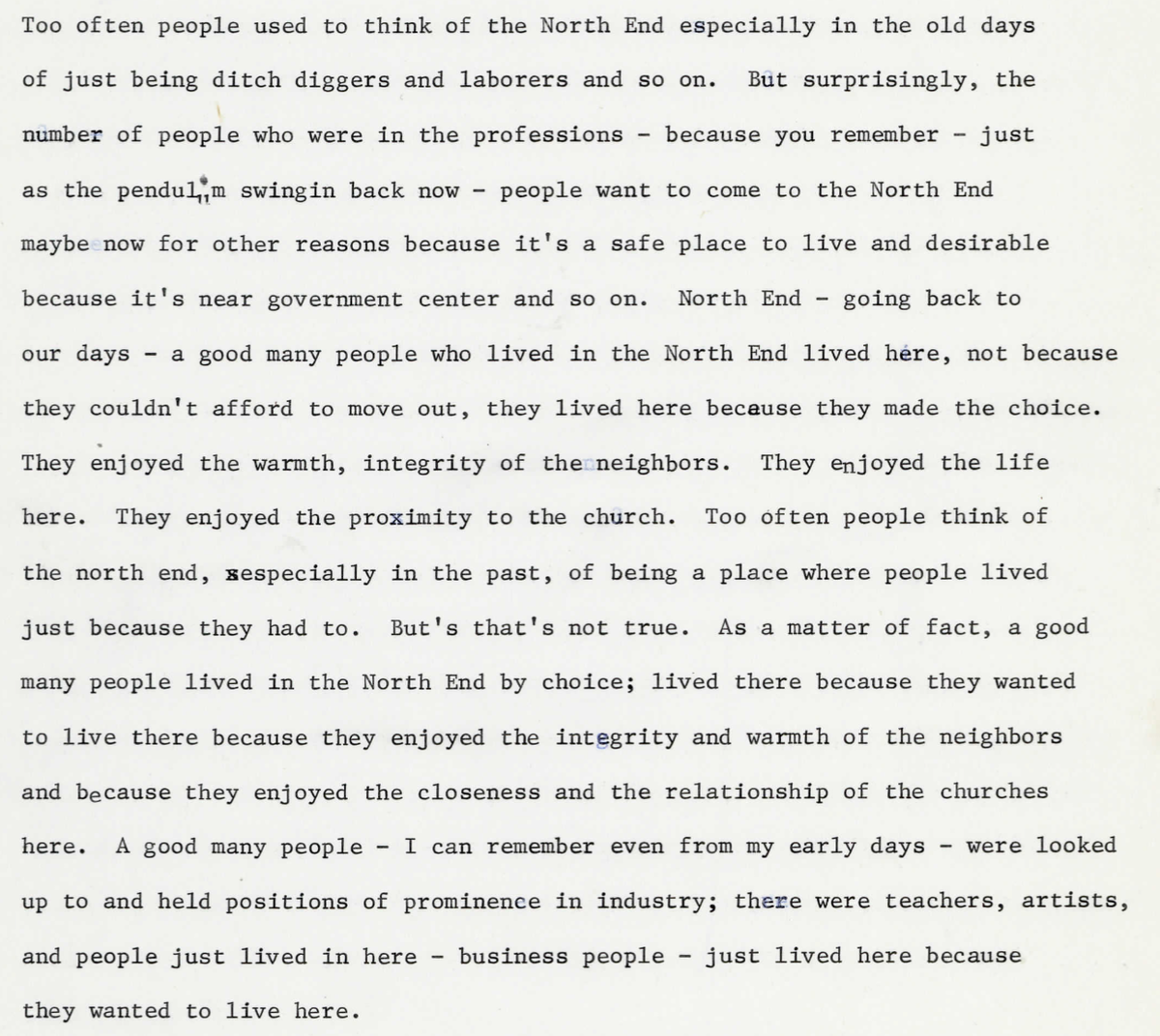 Petrina and her family lived in a tenement building in the North End and she explains how three of her neighbors in the building contracted the virus and later succumbed to it leaving two children behind. Pietrina discusses the quick actions taken by her family to help their neighbors and ensure the children’s safety. Her story mirrors many of the stories we have heard during Covid-19, proving the real bonds that community provides. 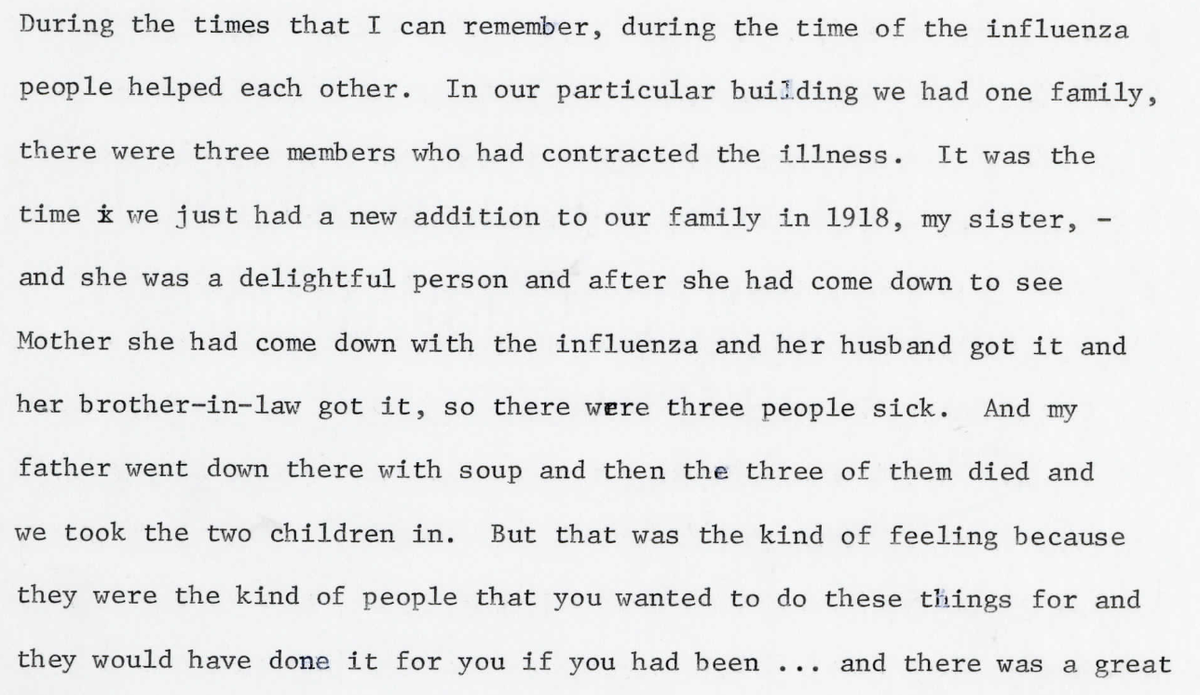 While bonds can be created organically, neighbors also create community when they formally organize to help and support each other. Keeping an eye on the ways that a neighborhood can be improved helps provide community enrichment. Karla Johnson, a Fenway resident, describes the two-year journey to build the Edgerly Road Playground between 1971-1973. The playground was an original idea conceived by students at Copley Square High School. Karla describes how the project became a community endeavor with parents, students, and neighbors all participating in creating plans, finding funding, and physically building the space. 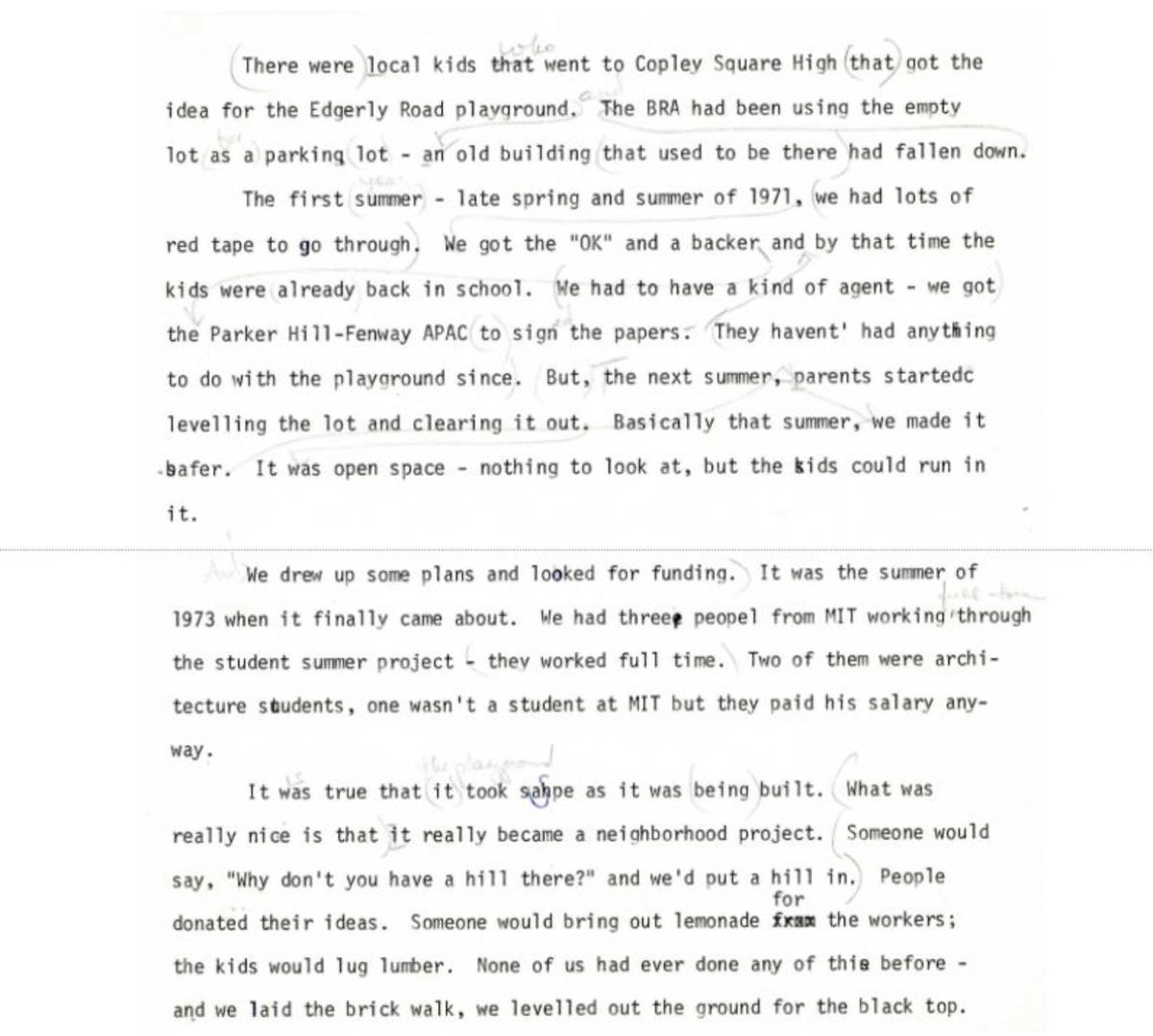 Karla goes on to describe the positive impact the playground created for all members of the community, and provides insight into the creation of its original mural.

The various buildings that make up a neighborhood create a microcosm of shared experiences. Anna Cole, a resident of the Bromley-Heath apartments in Jamaica Plains, describes the complex’s Bromley-Heath Tenant Management Corporation. As the first public housing in the United States to employ and be managed by its own tenants, Bromley-Heath (now the Mildred C. Hailey Apartments) created a unique, equal-opportunity environment in which community trust and involvement was found through the shared act of caring for the space that all Bromley-Heath tenants called home. 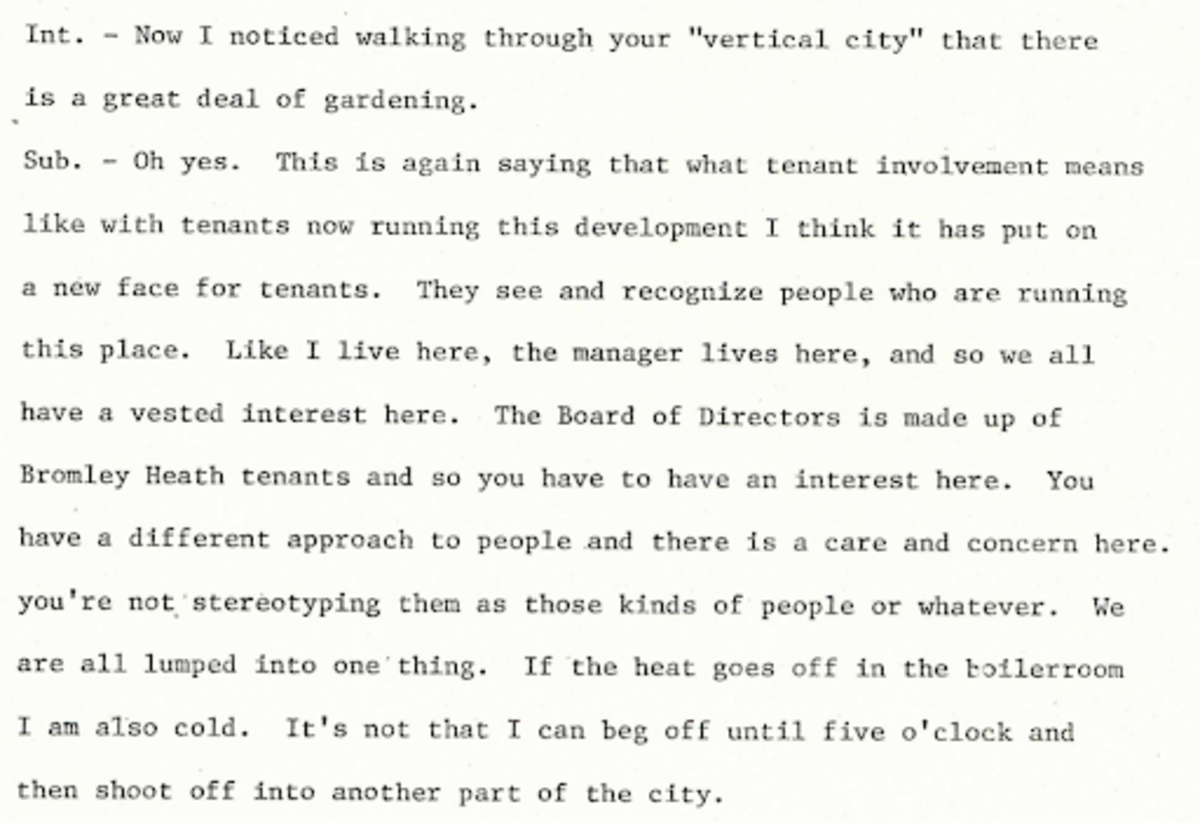 Anna also describes the gardens created by tenants, a beautification project, at that time, in its third year. She notes the recent addition of vegetable gardens as well as the creation of a “best garden” contest in which the winner will receive a week’s vacation! 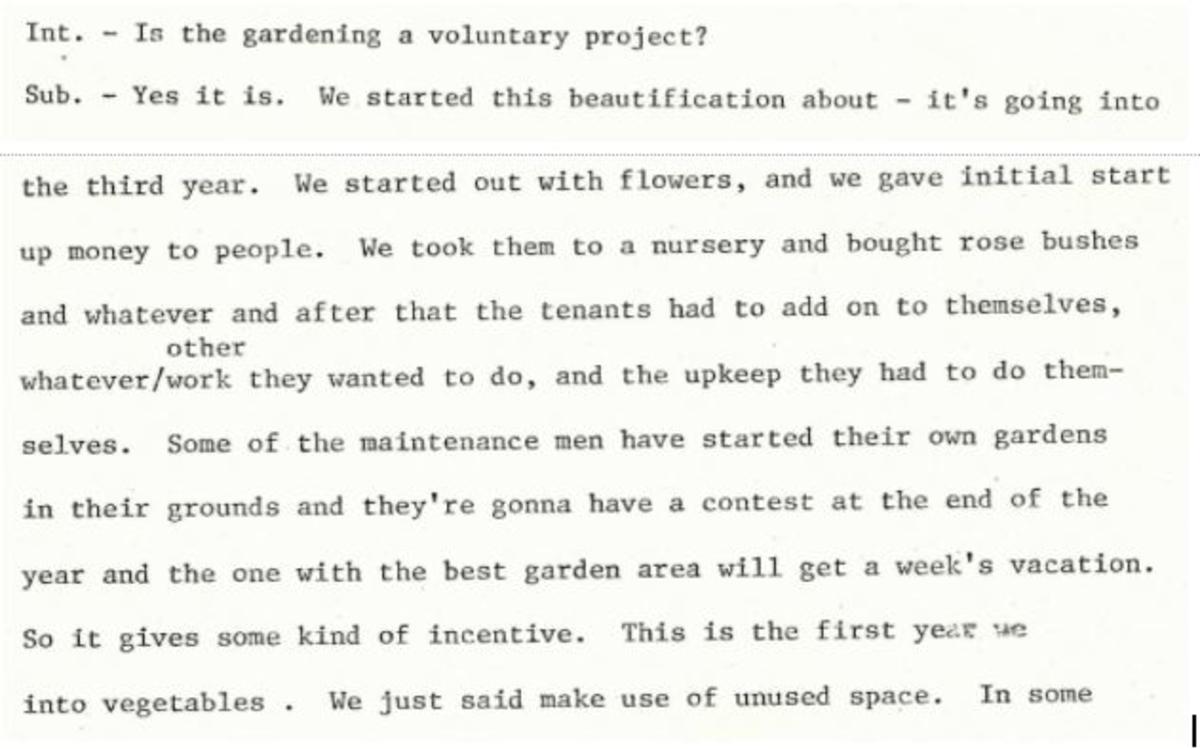 Today, Anna Cole has a community center near the apartments named in her honor! This center recently was used as a testing location for COVID-19.

For Bostonians who live in apartments, advocating for affordable and fair housing is a near universal issue. A third generation resident of Brighton on his father’s side, Joe Smith describes a particular demonstration for rent control staged by senior citizens and “quote hippy types” in the community. This peaceful demonstration illustrates that shared community issues create a powerful bond and driving force between community members who likely would not cross paths otherwise. Joe notes how the demonstration took place in front of the Allston-Brighton Little City Hall, a satellite branch of Boston City Hall. 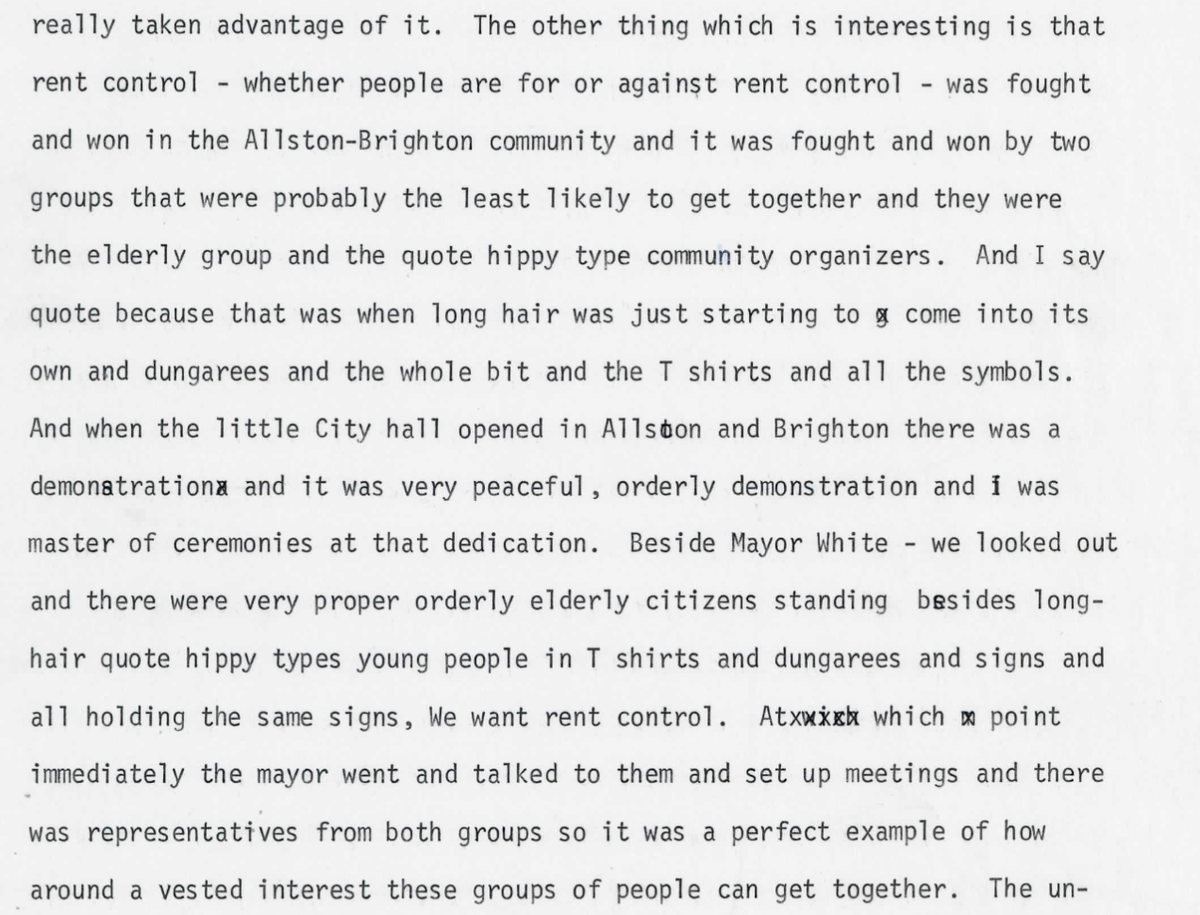 The ideas of memory and history are tightly wound into the framework of a community. These concepts take deeper root when particular sections of a community create bonds that sustain even as life moves forward. East Boston neighbors Sophie Catanese, Netta Forlizzi, and Carmelo Buttaro discuss how the bonds made between themselves and their neighbors on Cottage Street, between Porter and Gove Streets, have lasted over time. Netta explains that this bond has resulted in a yearly reunion of block members.

Communication, neighborly support, and advocacy are all important parts of what makes a community successful. Regardless of neighborhood, Bostonians find ways to come together to create vibrant spaces built on history and trust. Join us next week for part two of this series where we will explore clubs and organizations that put community members first!