Mayor Martin J. Walsh together with the Boston Police Department, Boston Parks and Recreation Department, and members of the community celebrated the opening of the playground and courts at Harambee Park. The playground and courts are named after Sergeant Dennis "DJ" Simmonds, the Boston Police officer who died in 2014 as a result of injuries he sustained while responding to a shootout in Watertown in 2013 involving the Boston Marathon bombers. The playground is part of the $2.7 million dollar Harambee Park master plan implementation, included in the  Mayor's Imagine Boston 2030 Capital Plan. 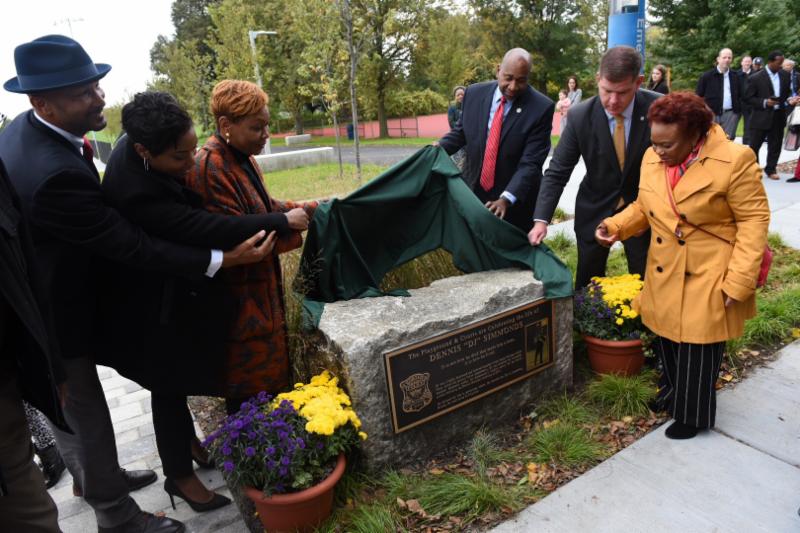 "I'm proud to name this new playground and courts after Sergeant Dennis 'DJ' Simmonds. He was a Boston hero whose name and legacy will live on as residents and families visit this playground," said Mayor Walsh. "This playground is an important part of our multi-phased renovation of Harambee Park, which will be transformed into a state-of-the-art place, featuring  children's play areas and courts for basketball, soccer and lacrosse, along with upgraded lighting and improved entrances that will make it a welcoming place for residents of all ages to visit."

"It's people like Sergeant Simmonds who exemplify what it means to be a hero," said Police Commissioner William Gross. "He showed us our highest values as a people, and our deepest bonds as a community. He will forever be remembered as someone who gave the ultimate sacrifice to protect his city, and for that we are eternally grateful. I am proud that this park will be a place where our young people can come together in memory of such an extraordinary man."

"Harambee is a Swahili word meaning 'pull together'," said Parks Commissioner Chris Cook. "It's fitting to honor Sergeant Dennis Simmonds, who worked each day to bring the community together. It's a privilege to honor his life with this new playground."

The opening marks the completion of the first phase renovation of Harambee Park, a 44-acre active recreation parkland located at 930 Blue Hill Avenue in Dorchester. The second phase of the renovation, budgeted for an additional $3.5 million, will include the construction of two natural turf multi-sport fields for soccer and lacrosse. The design process is taking place this fall with construction slated for the summer of 2019.

The ceremony celebrates $2.7 million in improvements funded by Mayor Walsh's Imagine Boston 2030 Capital Plan with an additional $400,000 provided by a Parkland Acquisitions and Renovations for Communities (PARC) Grant from the Massachusetts Executive Office of Energy and Environmental Affair.