Sports field at Roberts Playground has been renamed for the beloved TechBoston educator. 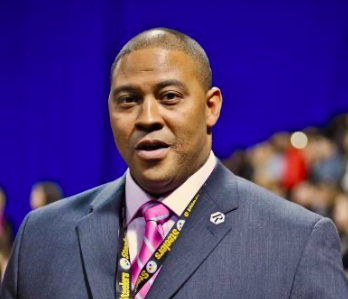 Love, 52, was diagnosed with prostate cancer three years ago and unfortunately lost his battle this past spring.

“Keith Love was someone who lived to empower and inspire young people,” explained Mayor Walsh during the Wednesday morning dedication ceremony. “He reminds us how important it is to have role models in our community, who make our city a better place. His courage, strength, and compassion will continue to inspire every TechBoston student who comes to this school. And we will always carry him with us in our hearts.”

Love was just six months shy of a 20-year BPS career, and spent the last 16 years working at TechBoston Academy. After nearly four years working as a coordinator in the Boston Public Schools technical vocational education department, Keith began working at TBA in 2004 as a program director. Three years later he became TBA’s chief administrative officer, and in 2013 he became school leader, alongside co-headmaster, Nora Vernazza.

“Keith had so much Bear Pride and was widely known as the heart and soul of the TechBoston Academy community” noted Superintendent Cassellius during her remarks. “We are so lucky to have known Keith and are better because of his presence in all our lives.”

The newly dedicated Keith Love Field was renovated with artificial playing turf in 2013 and is home to many local sporting events. “The field that we are standing on today  is meant to be enjoyed by members of this community that Keith loved so much. A place where teammates become friends, where coaches become mentors, and a place where teachers and students can continue to connect outside of the classroom” remarked Boston Parks Commissioner Ryan Woods during his remarks.

For video footage of the ceremony see more coverage from WCVB 5 Boston.