Mayor Walsh, the Environment Department, the Office of Women's Advancement, the Streets Cabinet, and the Office of New Urban Mechanics today announced the dedication of the City's first electric-assist cargo tricycle.

Mayor Martin J. Walsh, the Environment Department, the Office of Women's Advancement, the Streets Cabinet, and the Office of New Urban Mechanics today announced the dedication of the City's first electric-assist cargo tricycle. In a virtual naming ceremony, the tricycle was named after Katherine "Kittie" Knox, a Black West End resident in the 1880s who confronted racial and gender stereotypes in Boston's bicycling community. The new tricycle also supports Boston's work to reduce emissions from municipal sources, a critical goal of the 2019 Climate Action Plan Update. 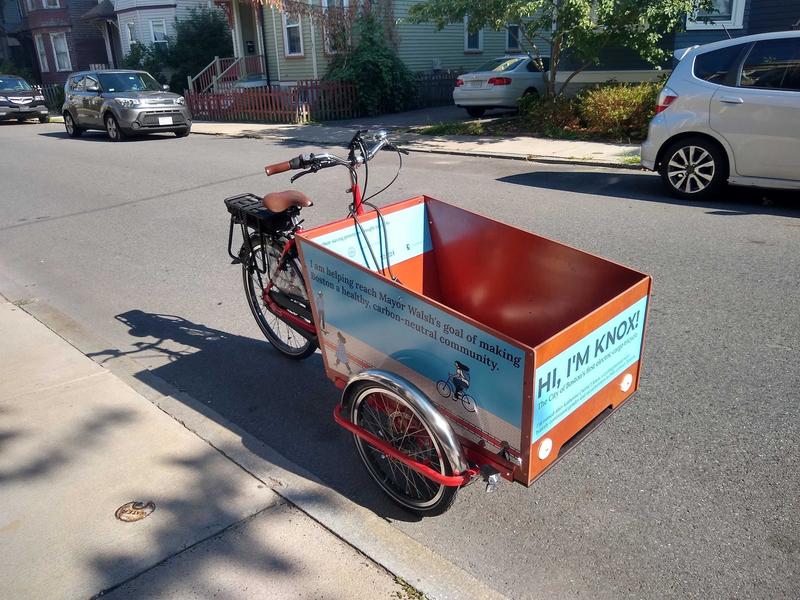 "This new tricycle is an innovative new program as Boston continues its work towards achieving carbon neutrality in our city," said Mayor Walsh. "I'm proud this tricycle is named after Ms. Knox, an early leader who championed equity in the bicycle community. In Boston, we have also proclaimed August 20 as Kittie Knox Day."

In October 2019, Mayor Walsh released an updated Climate Action Plan to further strengthen the City's ongoing initiatives to mitigate and adapt to climate change, including immediate steps to significantly reduce Boston's carbon emissions and strengthen the strategies needed to achieve the City's long-term goal of achieving carbon neutrality by 2050. This new tricycle also builds on Boston's reputation for being one of the most energy-efficient cities in the United States, and complements existing programs such as Renew Boston Trust, Community Choice Energy, the Electric Vehicle Parking program, and Boston's long-standing building energy benchmarking program. The trike is intended to support City staff performing their daily tasks.

The City of Boston is receiving support on zero-emissions vehicle deployment as part of the Bloomberg Philanthropies' American Cities Climate Challenge, which Boston was named a winner of in October 2019. The cargo tricycle is part of that effort. It is meant to be an option to replace a trip that would otherwise be taken by an employee using a city vehicle.  Research shows that reducing car dependency for short trips can contribute to overall mode-shift toward active modes, as well as reducing greenhouse gas emissions.

"This innovative electric cargo tricycle pilot, aptly named for the pioneering Kittie Knox, reflects Boston's leadership in creating more sustainable ways for people to get around. It is always heartening to witness an American Cities Climate Challenge city turn a vision into reality - and even more so when it honors the life of a woman who fought valiantly for racial and gender equity. The 'Knox' marks an important milestone in Boston's commitment to fully decarbonize its transportation system and will serve as a reminder of the enduring legacy of Boston's trailblazing women," said Amanda Eaken, Director of the American Cities Climate Challenge.

In partnership with the Office of Women's Advancement, the City is naming the cargo tricycle in memory of Katherine "Kittie'' Knox as part of its centennial commemoration of the 19th Amendment's ratification, which expanded voting rights to women.

"As we honor and reflect on the one hundred years of women at the ballot, we must recognize the trailblazers who wanted an equitable part in America's growth," said Tania Del Rio, Executive Director of the Office of Women's Advancement. "While Kittie Knox was breaking racial and gender barriers in the white male-dominated sport of cycling, suffragist leader Lucy Stone was inspiring women in Boston to organize for the right to vote. This dedication pays homage to the bravery and innovation of Boston's women from Knox's time to now."

Ms. Knox was a member of Riverside Cycle Club in Cambridge, the prominent Black bicycling club in the greater Boston area in the 1890s, and joined the League of American Wheelmen in 1893, before the national association adopted a "white only" membership policy in 1894. When Ms. Knox went to a competition hosted by the League in New Jersey in 1895, some members tried to bar her entry, though she showed proof of membership in the League.

"Kittie's life deserves recognition and it is gratifying that the bicycling community is making space to learn from Kittie and its past treatment of her and people who looked like her," said Larry Finison, author of Boston's Cycling Craze, 1880-1900. "Kittie Knox is indeed an exemplar of equity, diversity, and inclusion."