Skip to Main Content
City department hours
/
Starting on Monday, July 20, City Hall will be open to the public on Tuesdays, Thursdays, and Fridays from 9 a.m. - 5 p.m. If you need to visit a department at City Hall, you must make an appointment.
Department information
COVID-19 information
/
For the latest updates, please visit our coronavirus (COVID-19) website:
Coronavirus updates
Back to top

BOSTON - Tuesday, October 1, 2019 - Mayor Martin J. Walsh and Boston Parks and Recreation Commissioner Ryan Woods broke ground yesterday at Garvey Playground, kicking off the beginning of construction on the park. The $5 million project will bring renovations and improvements to the Dorchester park including upgrades to sports areas, enhancements in lighting, walking paths and seating areas, and improvements of accessibility.

The new structures of the playground will ensure climate readiness and resilience capabilities, absorbing water to protect neighborhoods from flooding. It will also improve air quality by capturing carbon and providing shade during heatwaves.

"I am so excited to break ground on a community space that is accomplishing so many of our City's goals: climate change resiliency, accessibility, open space, and walkability for all ages," said Mayor Walsh. "Boston's parks are meant for all residents, and I'm proud of our continued investments that will improve the lives of all our residents, and bring them together in a beautiful space." 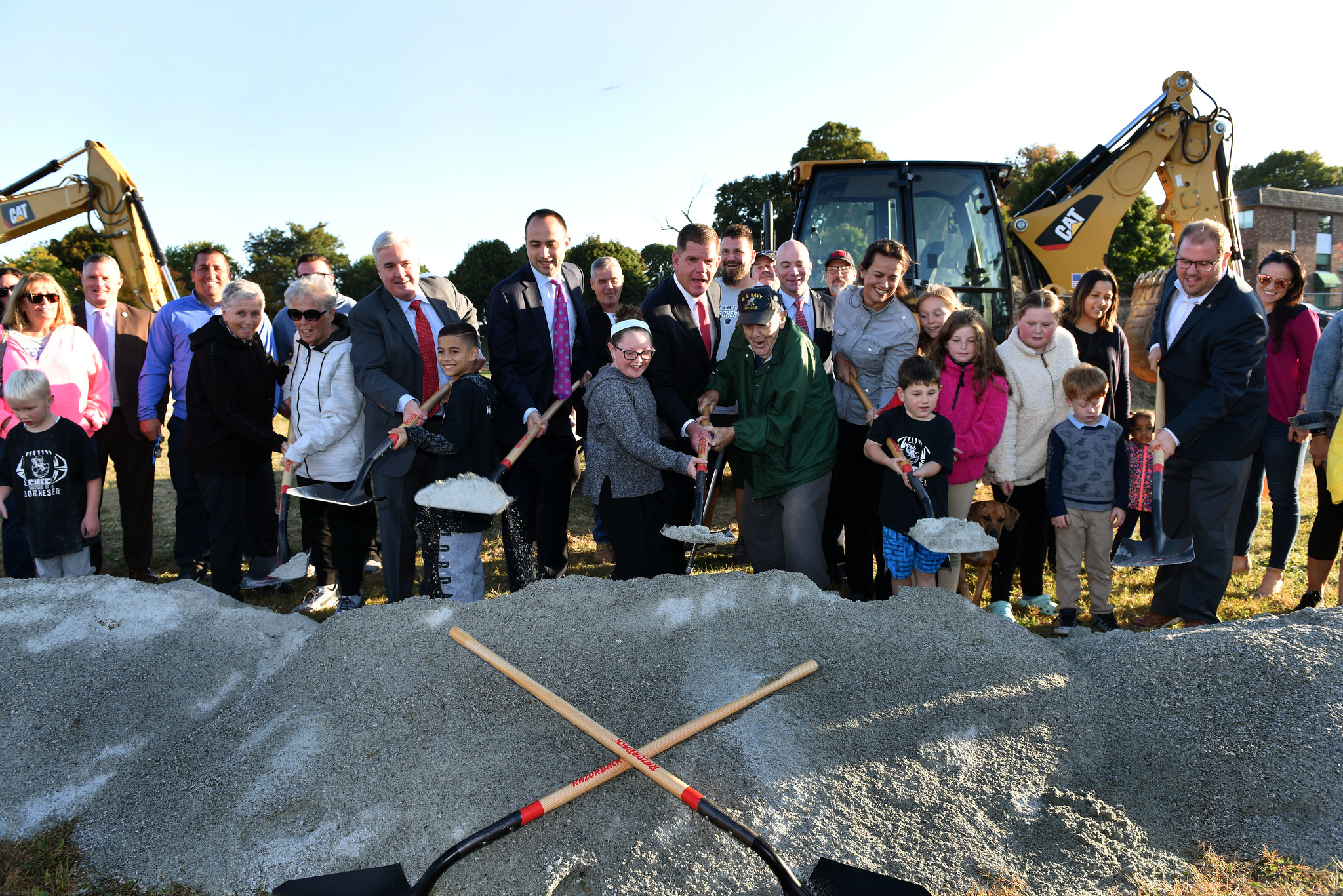 At just under five-and-a-half acres, Garvey Playground is a popular park located in Dorchester with planned improvements for street hockey, basketball, flag football, men's and women's lacrosse and Babe Ruth senior baseball. In addition, improvements will be made to two play areas for children, a seating area and shade structure, a viewing terrace at the field house, dog park, accessible entrances, a walking loop, water cooling area, field lighting, and a new scoreboard for field and street hockey.

The $5 million project budget includes a $790,000 grant from the Community Preservation Act, specifically for accessibility and a dog park. Part of the land for the dog park and the Babe Ruth senior baseball field are on Massachusetts Department of Conservation and Recreation (DCR) property. The Parks Department and DCR coordinated to create accessible entrances off Morrissey Boulevard to assure accessibility to the dog park and senior baseball diamond.

"The community is very excited for the redesign and improvements to Garvey Park. This $5 million commitment by the City of Boston creates state-of-the-art spaces for flag football, street hockey, basketball, lacrosse, and baseball," said Phil Carver, co-founder of the Greater Neponset Flag Football League. "Garvey Park has been a staple in this community for over a generation and this reinvestment will ensure it will remain so for generations to come."

Garvey Playground will be a part of the City of Boston's resiliency initiative. Last year, Mayor Walsh announced a comprehensive and transformative vision that will invest in Boston's waterfront to protect the City's residents, homes, jobs, and infrastructure against the impacts of rising sea level and climate change. Mayor Walsh's plan, Resilient Boston Harbor, lays out strategies along Boston's 47-mile shoreline that will increase access and open space along the waterfront while better protecting the city during a major flooding event.

About the Boston Parks and Recreation Department