The event celebrated the start of construction for the renovated Adams Street branch, an $18.3 million collaborative development. 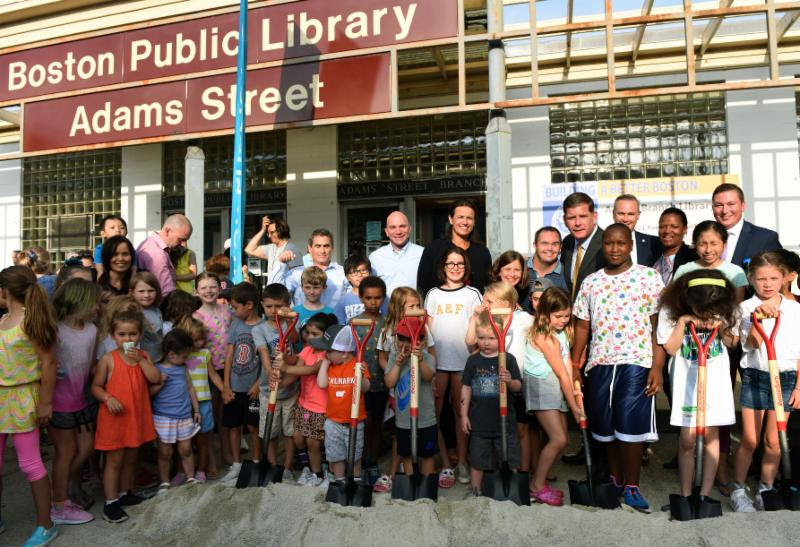 "Our public libraries represent our shared values. The investments we are making in our neighborhood libraries are a direct reflection of the love of libraries that I see and hear from our residents," said Mayor Walsh. "If you go to any branch library in the city after school, you will see children from all different backgrounds reading books, asking questions, doing projects, and exploring worlds of imagination and information. They're finding material to build their dreams with, and I'm proud that we're creating new spaces for them to do exactly that."

The Adams Street Branch opened in its current location in 1951 as one of six branches in Dorchester, but until now, had seen limited capital investment since its establishment. A 2016 feasibility study, undertaken by the BPL, the Public Facilities Department, the community, and the design team helped identify the community's goals and priorities for the renovation, such as transparency, inclusion, and access.

New amenities in the Adams Street Branch will include updated technology, expanded program space, and high-performance, sustainable systems. Enhancements over the former library will include a more accessible front door, easier access to library collections, a larger Community Room, new study and conference rooms, and a music room.

The future Adams Street Branch doubles the size of the current branch, and will also include:

The building landscape is planned as a tribute to the 20th century Adams Street Branch and is a sustainable, low-maintenance green space. At the southern edge, along Delmont Avenue, the building splits to draw additional light into the Adult and Children's sections, as well as creating a rain garden will absorb much of the roof's run-off. On the northern side, along Oakton Avenue, a great heritage Pin Oak will remain, and the Reading Garden will be recreated with expanded seating and space for outdoor programs.

The Adams Street Branch Library will close at the end of service on Friday, July 12, 2019. Library services will continue at the Fields Corner and Lower Mills branches. The Lower Mills branch will reopen on Saturday, July 13, following a $226,000 renovation, including replacement of the Borrowers Service desk and flooring, along with painting throughout the branch.

Rendering of the future Adams Street Branch of the Boston Public Library.